A new set of operational concepts and technologies are being developed to drive successful EtherNet/IP deployment to many low end constrained devices or “Things” such as contactors and push buttons. This development could help enable a single-network vision where all devices in an industrial plant can communicate with the same set of protocols, while balancing node cost, node size, and ease of commissioning the smart system.

Industrial Ethernet has exhibited rapid growth, with EtherNet/IP emerging as a leader. The reality is that fieldbuses and sensor networks still retain a large position and many potential network nodes remain hardwired. End users understand and seek the advantages of a harmonized network based on EtherNet/IP, and the related open ecosystem. Benefits include reduced complexity and cost by minimization of gateways and elimination of hardwiring, expansion of the qualified labor pool, and improved optimization and maintenance opportunities via Cloud connectivity and analytics. 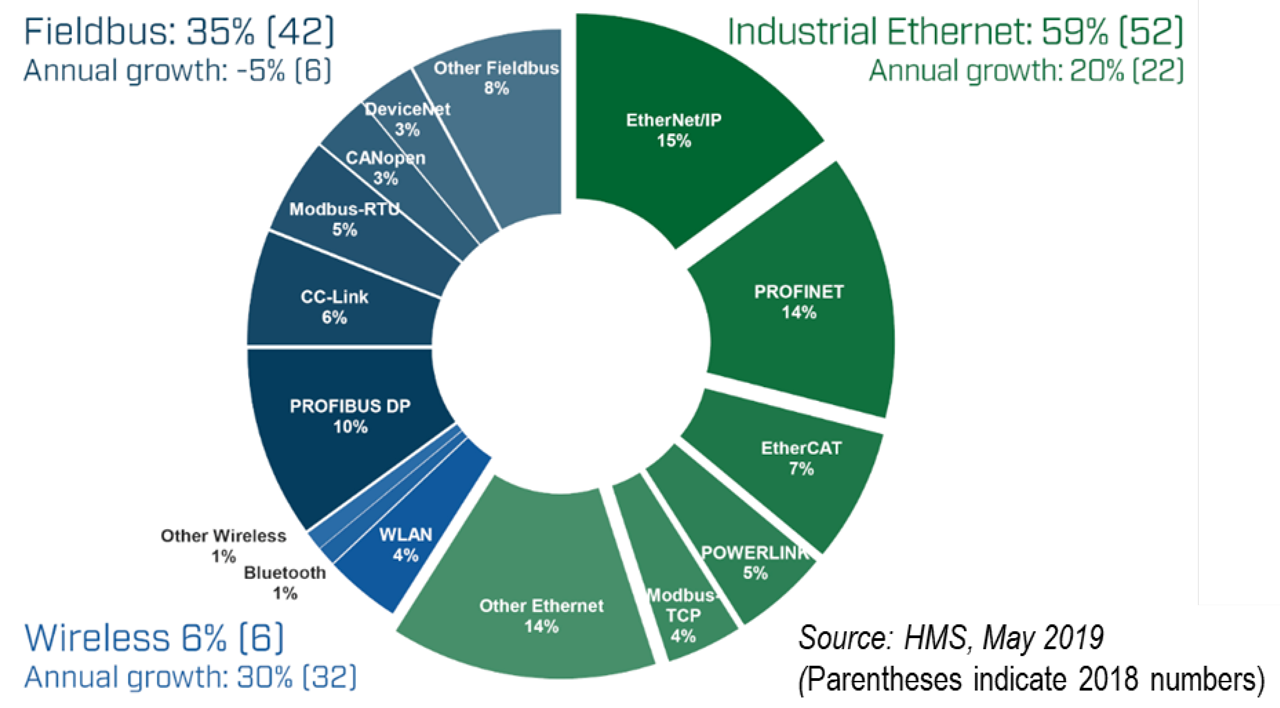 With these benefits numerous industries have flooded into IEEE to develop enhancements for enabling Ethernet to displace other networks at the edge. The resulting Single Pair Ethernet suite offers reduction in wiring, node cost, size, and power consumption, delivering communication and power over a single pair.

A deterministic Ethernet bus variant targets very constrained devices, such as in-cabinet components. In prior years, we proposed a set of enhancements, adopted from or inspired by IETF and IEEE, to extend EtherNet/IP into constrained applications, further enabling the single network vision.

Figure summarizes the constrained EtherNet/IP proposal. Features in red are eliminated. Features in green are new additions. Features in yellow are modified (reduced).

Many end users understand and are seeking the advantages of a harmonized network based on Ethernet, Internet Protocol (IP), and the related open ecosystem. This desire is expressed within organizations across many industries.

The Automotive industry has been working toward an all-Ethernet vehicle. The industry formed the OPEN (One Pair EtherNet) Alliance to promote a variety of Single Pair Ethernet (SPE) solutions. Ethernet now pushes to the edge to displace other networks in the vehicle.

IEEE continues to extend the standards for Single Pair Ethernet (SPE) to meet the specialized needs at the edge. These initiatives exist due to compelling advantages of a single network:

Several new application areas are being targeted for EtherNet/IP at the network edge. These are constrained applications for field devices. From basic control, up through the enterprise, 100BASE-TX Ethernet and emerging 1000BASE-T Ethernet is suitable and likely to remain in place. At the field level, these are not well suited to meet the listed constraints.

Constrained EtherNet/IP application areas include Process Automation and the related application area of Low-power Wireless. They also include On-machine components. Each has unique constraints. Another important application is In-cabinet components. Here the transition is primarily from hardwiring to networked devices. Very strict constraints exist for low cost, small size, and low power.

The following section covers the Constrained In-Cabinet Device viewpoint and describes how the Single Pair Ethernet technology can be applied in this space. The amount of control power (24VDC) wiring required to control pilot devices (such as push buttons, indicator buttons, contactors, etc.) is substantial. The wired connections, typically referred to as “hard wired connections”, supply control power to the pilot devices for operation.

The number of wires for a simple in-cabinet application would require numerous hours for commissioning and is error prone if needed to be replicated. Once commissioned, “hard-wired” systems for industrial applications create a high overhead for maintenance including, component updates or troubleshooting errors during operation or commissioning process while providing little to no intelligent data for analytics.

Based on the constrained in-cabinet device problem space, following are extracted key customer requirements based on extensive customer listening sessions:

Following are key technical characteristics of 10BASE-T1S that could be leveraged in the development of in-cabinet applications:

ODVA SIG Proposed Timeline highlights a timeframe of activities to publishing a complete specification for Single-pair Ethernet for Constrained In-Cabinet devices. Definition of the communication protocol and related specification is being defined by the ODVA ENIP System Architecture Special Interest Group, focused on delivering 3 ESEs pronouncing the UDP only Transport profile for T1S (currently to be published April ’20), CIP Security for Constraint In-Cabinet Devices and Constrained In-Cabinet Application profile for T1S.

Definition of the media is conducted in the ENIP Physical Layer SIG, which is focused on delivering 3 ESEs, pronouncing the cable and connector specifications, the SP Tap connectors and grounding specifications and the Media Planning and Installation Manual.

The proposal is for a mixed gauge 7 conductor cable:

Working with different semiconductor vendors for early 10BASE-T1S PHYs, there are three options.

Option 1 is PHY with MII interface, which will require MCU with MAC and RS built in. This is not a preferred option since MCU with MII interface tend to be a lot more expensive than what the constrained in-cabinet device can afford. More than 16 signals need to be routed between PHY and MCU, therefore requires more board space.

Standard organizations are working on standardizing SPI interface for 10BASE-T1S PHY and we have learned from semiconductor vendors that the SPI PHY will be available in 2020.
Option 3 is PHY and MCU integrated on a single chip. This will greatly reduce the overall package size and could potentially offer the lowest cost option. The challenge is to come up with a part that has right mix of processor power, memory footprint and security features, which can be adopted by the mass market.

Data transmission communicates from an automation system to a cloud system for further analysis.

The UDP-Only EtherNet/IP transport profile specifies the exclusive use of UDP for the transmission of all CIP messages. This profile, since TCP is no longer required, results in a simplified EtherNet/IP stack.

Since CIP Security requires both TLS and DTLS, we also propose to add optional support for into the EtherNet/IP adaptation for DTLS-only. Proposed additions to Volume 8 CIP Security will allow devices implementing the UDP-only EtherNet/IP transport application profile, DTLS is used for all CIP communications sent in a CIP Security context.