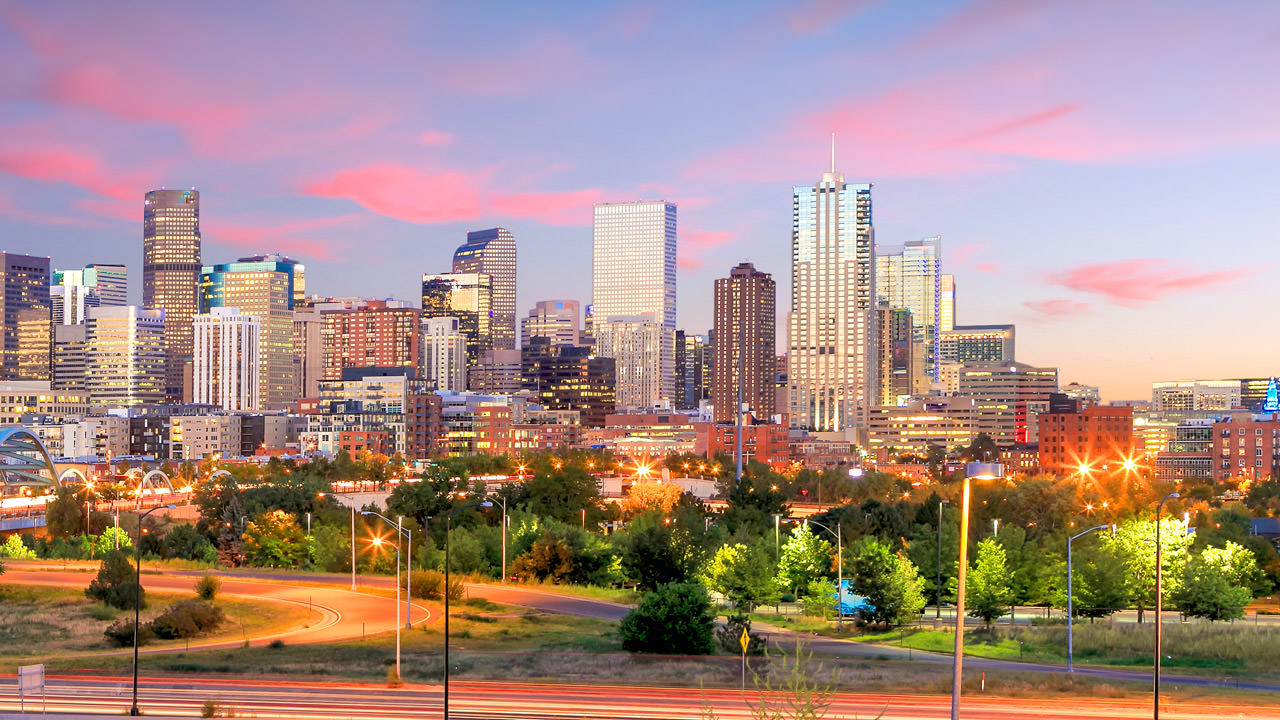 The ability to offer a robust, easy-to-use solution that could meet the needs of today and scale to meet the challenges of tomorrow solidified Denver’s decision to modernizing its TCN infrastructure. Highly configurable offerings also helped them achieve a holistic view and better management of its massive network.

To address its population and infrastructure growth, the City and County of Denver, Colorado’s largest municipality, underwent an upgrade to its traffic control network. Despite the size and operational complexities of the Denver area, city officials can now confidently manage its current and future traffic control needs with reliable, high-performing next-generation technology.

Traffic control systems have a lot at stake, promoting the orderly movement of vehicular and pedestrian traffic to not only encourage the steady flow of activity, but to preserve public safety. Traffic lights, cameras, sensors and other connections have become an integral part of society. Despite the public’s reliance on the organizational structure and uptime of roadway signals, many are unaware of the resources necessary to effectively manage these systems.

For any traffic control network (TCN), signal management consists of many moving parts. Aside from maintaining outages, teams are tasked with geographic configuration, proportioning population to the number of signals, congestion mitigation, signal timing and more.

The increasing number of high-throughput devices such as cameras have only made this more complex. While traffic divisions rely on the active prioritization and collection of information to expedite critical data transfer, higher bandwidth requirements have created issues for legacy systems. As one of the transportation industry’s most visible services, officials must prioritize traffic engineering and operations.

Sitting among the top 20 most populated cities in the United States, this has been no small feat for the City and County of Denver, which began its journey to modernization after its primary devices were discontinued by its long-standing vendor. Denver’s network had already experienced dozens of failures with its existing technology, and with its main technician retiring, they had to act fast. City planners reasonably began to worry there was only a matter of time before bottlenecks and outages—or worst-case scenario, a complete crash of the system— would cause detrimental effects.

As Denver continued to experience rapid population growth, its TCN currently consisting of more than 6,000 devices, legacy systems wouldn’t cut it. Continued network expansion was inevitable for this large-scale project. Its massive size and complexities required a highly configurable, reliable and comprehensible solution that could grow along with its network. 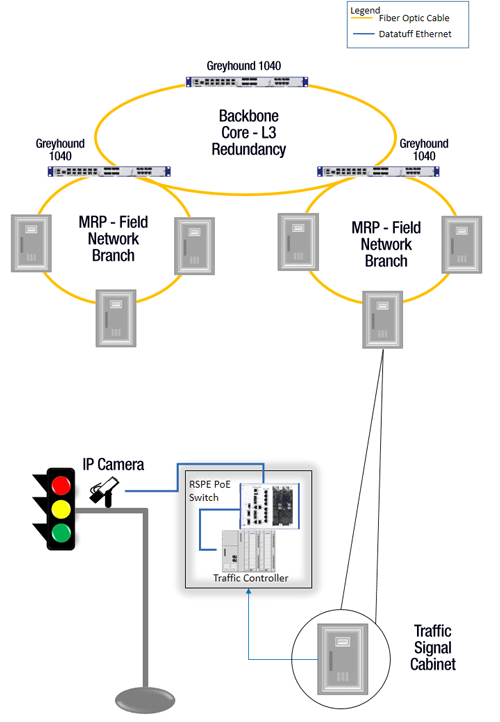 City engineers sought a solution that could expand enough to meet the needs of Denver’s quickly—and constantly—changing infrastructure. Reliability, ease of use and defensibility were primary considerations during vendor selection, but also top- of-mind for Denver engineers was timelessness.For this transformation, a future-proof infrastructure meant:

“From CV technology to UPS systems, the current traffic operations field equipment is increasingly reliant on IP networked devices. So, we needed a field hardened, reliable, high bandwidth network switch that could meet our rapidly changing transportation systems equipment. Our decision to go with Belden has allowed us to have the proper edge deployed equipment in place, so we can continue to modernize our transportation system safely and effectively,” said Michael Finochio, engineering manager for the City and County of Denver.

As part of the planning process, officials and the engineering team worked together in the field to identify issues that would likely become problematic down the road and mapped out a customized plan.

A network as large and complex as Denver’s city-wide traffic system physically could not be converted to a new platform in a single instance. This large-scale conversion continues to be conducted in stages to ensure performance and uptime, while building safeguards and redundancies on the backend.

To meet the City and County’s performance and uptime requirements, as well as provide the evidence the team needed to continue modernization, a combination of existing and Hirschmann devices were suggested for the first phase of the migration.

In 2013, Belden field application engineers joined City and County engineers out in the field for testing, making sure the suggested plans and recommendations were ideally suited for the network’s environment. Approximately 20 MACH1040 switches were installed to match the redundancy requirements of Denver’s TCN and the migration project was in full swing.

Phase Two: getting the green light

The second phase centered on the annual replacement of legacy equipment with Hirschmann devices. These gradual upgrades involve the migration from switches with underperforming redundancy capabilities, to the faster, more dependable performance of new switches.

Although Belden’s engineers are not always actively on-site to address network gaps as they arise, the graphical interface of the Industrial HiVision management software and seamless configuration capabilities has enabled Denver’s technicians to complete tasks that once seemed impossible.

Considering the constant replacement of lights and installation of other devices to improve Denver’s TCN, it’s no surprise the project is still underway. Complemented by the dedicated, day-to-day technical and design support of Belden’s engineers and the graphical features of Industrial HiVision, a slow—but steady—transformation has allowed Denver to maintain system integrity without compromising comprehensibility.

“The demands presented by the City and County of Denver were unique in that there were multiple layers of complexity that needed to be accounted for. This was truly a case of a zero-fail standard. When working with government agencies the importance of not only designing a network that operates as intended, but is also highly secure, cannot be overstated. The City and County of Denver was a great partner and together, we built a traffic control network that can serve as a model for municipalities all over the world,” said Scott Kornblue, field application engineer at Belden. 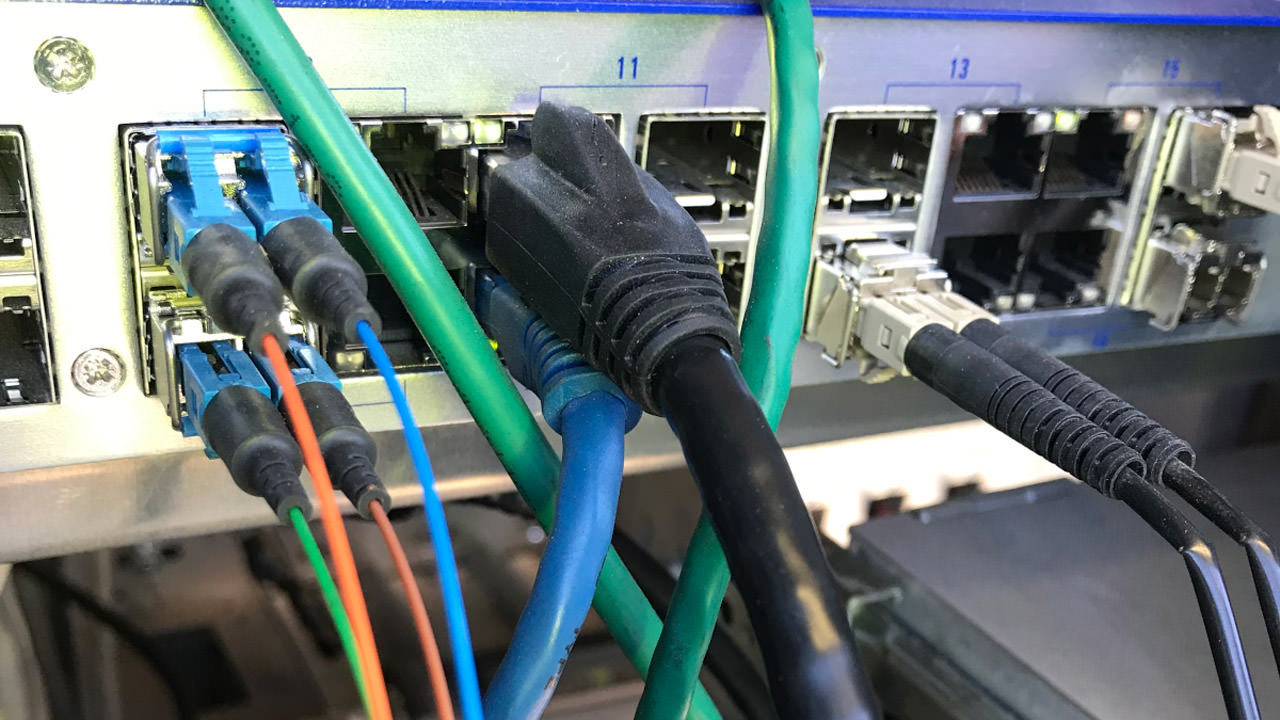 At the heart of this network solution is a core redundant ring topology which facilitates multiple subrings that provide redundant network connectivity and robustness to Denver’s TCN.

By using this technology, as opposed to integrating other redundancy techniques, Belden significantly increased the availability and resiliency of the network—providing multiple paths for communication. Apart from the industrial-grade equipment recommended, Belden has the advantage of a fault-tolerant network that can handle multiple consecutive failures happening in a very short period.

The design integrated robustness and contingencies that allow the TCN to operate transparently, regardless of the disruptions that arise—whether it be a network failure, disconnection of copper or fiber cables, or another unexpected circumstance. Essentially, the industrial ring topology makes transition more seamless and comprehensive for engineers with little or no experience in design or upkeep.

The City and County of Denver used the following networking technology to transform its TCN operations.
RSPE Switches: Designed for networks that require 100% availability for data communications, the compact and extremely robust RSPE switches comprise a basic device with eight twisted pair ports and four combination ports that support Fast Ethernet or Gigabit Ethernet. The device can be extended to provide up to 28 ports by adding two media modules.

Full Gigabit Ethernet Switches: Designed specifically for use in the power industry, they can be connected to form sub- networks, which in turn can be linked up to each other.

The ability to offer a robust, easy-to-use solution that could both meet the needs of today and scale to meet the challenges of tomorrow solidified Denver’s decision to partner with Belden in modernizing its TCN infrastructure. The increasing benefits of the migration, however, are not solely reliant on the consultancy and conversion of Denver’s devices to Hirschmann switches.

Highly configurable offerings were introduced to Denver to help them achieve a holistic view and better management of its massive network. Together, these solutions will provide virtually foolproof detection of behavioral anomalies, as well as maximize efficiency at every point of the network.