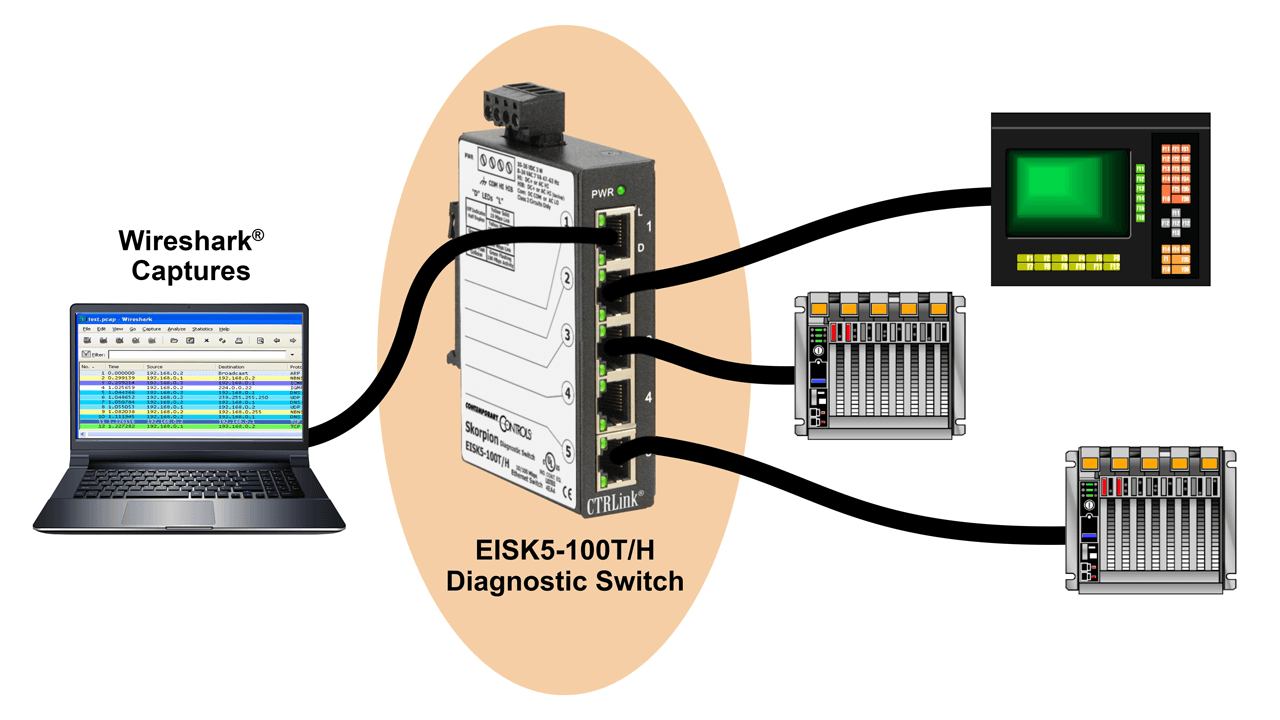 Testing and system debugging Ethernet switches is a significant issue for machine builders. One solution is a switch retains all the features of an unmanaged switch such as auto-negotiation and auto-MDIX while also simplifying testing and eliminating the need to cycle power for each phase of testing.

A machine builder complained that testing with Ethernet switches was often a headache. Although one benefit of an Ethernet switch is that messages are only directed to ports party to the communication, that makes protocol debugging difficult.

“I had to turn off the Ethernet switch to clear its MAC Address table each time I moved the Ethernet cables around for different devices on the machine,” the machine builder said.

Having to cycle power for each test increased the time it took to complete the project, plus it was a hassle. I wanted a way to have an easily accessed test port.”

Replacing the Ethernet switch with a Skorpion diagnostic switch from Contemporary Controls simplified testing and eliminated the need to cycle power for each test.

The switch retains all the features of an unmanaged switch such as auto-negotiation and auto-MDIX except for one significant feature; it does not learn. Because it does not update its database of source MAC addresses and switch port pairings, the switch continues to flood all ports with messages as if they were broadcast messages. This allows protocol tools such as Wireshark to capture any network traffic that goes through the switch regardless of the port location of the traffic.

Instead of installing a managed switch with port-mirroring in each equipment room, the machine builder installed a switch in each control panel that had an Ethernet connected PLC Controller.

“Most of the traffic I was interested in was related to the PLC controller,” the machine builder said.

“I don’t need to leave my laptop connected,” said the machine builder. “I just connect when I need to do protocol analysis, configure a device on-line, or observe web pages. With this set-up, I’ve gained a network diagnostic port ready at all times to be used.”

The switch can also be used for control panel installations where one needs the ability to diagnose problems in the field. It can also be used in a development environment when debugging code. A metal DIN-rail clip attached to the aluminum enclosure can survive the toughest installation.