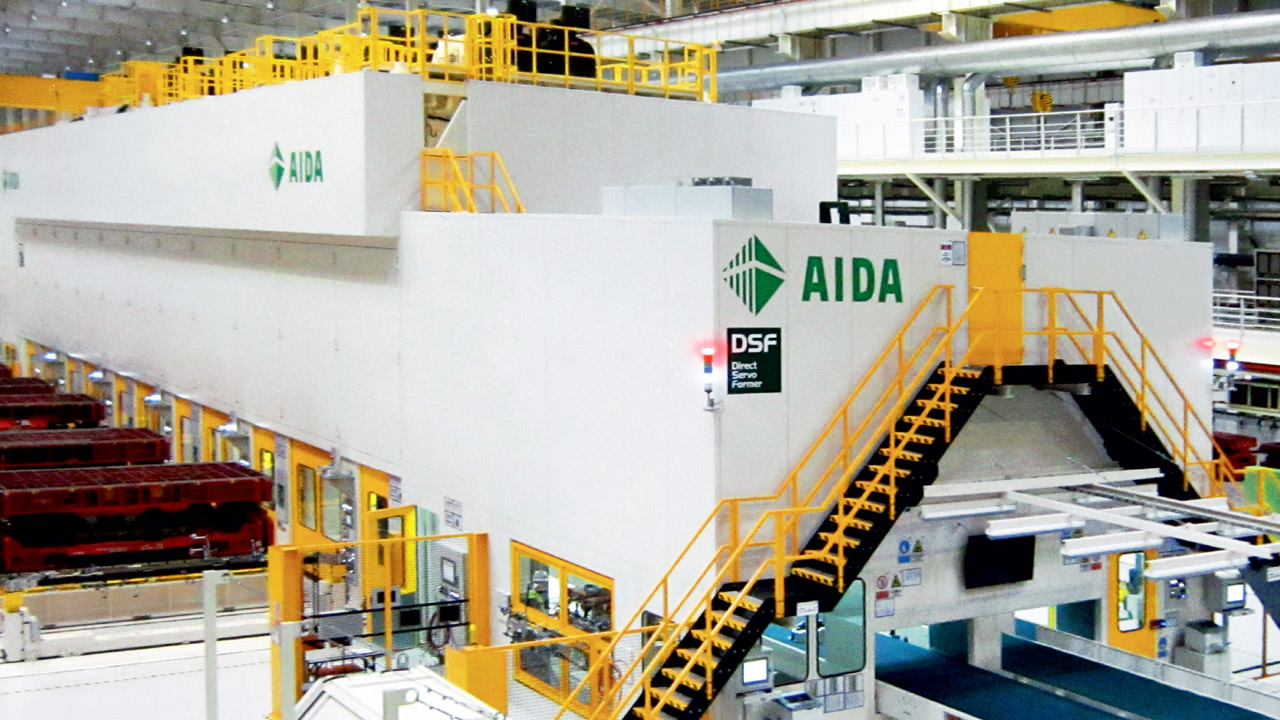 Implementing Industrie 4.0 and Internet of Things (IoT) concepts is leading to a huge increase in the volumes of data in manufacturing plants. PC-based control technology forms a potent solution for processing this data, as manufacturers seek to meet the demands of optimizing manufacturing quality and efficiency.

The demand to optimize manufacturing quality and efficiency while implementing Industrie 4.0 and Internet of Things (IoT) concepts is leading to a huge increase in the volumes of data in manufacturing plants. Considering its performance and compatibility with the IT world, PC-based control technology forms the ideal basis for processing this data.

Press manufacturer Aida Engineering, based in Kanagawa, Japan, recognized that advantage at a very early stage. It has therefore relied for many years on PC-based control from Beckhoff and on the globally established EtherCAT standard for its press solutions, e.g. for the automotive industry.

The largest servo presses from Aida can exert more than 3,000 tons of pressure on the raw material. Designed for high-volume series production, they are used in the most diverse industries.

These include the automotive industry, in particular, with its special requirements. Here, the formed parts must be increasingly lighter to produce vehicles with a lower weight and thus lower fuel consumption. The sturdiness of the parts must not suffer in the process, however, to ensure that the occupants of a vehicle are still protected as well as possible in the event of an impact.

In order to meet these requirements, the use of sheet steel with a high tensile strength has become established in the automotive industry.

The Aida servo presses enable very precise machining of this demanding high-strength material through exact speed control. In addition, complex designs are implemented in the manufacturing of vehicle bodies, especially in Europe. Aida designed a tandem version of the servo press specifically for such applications. This version can even form complex geometries in a short time. 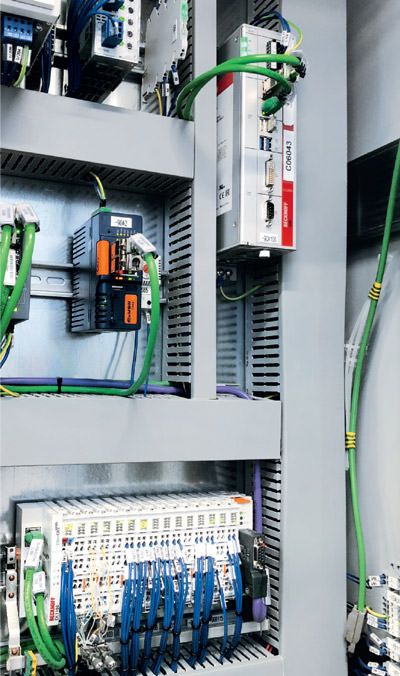 The individual processes within the Aida press lines are controlled by an Industrial PC with TwinCAT software as well as various EtherCAT terminals.

Aida uses Industrial PCs (IPCs), TwinCAT 3 automation software and EtherCAT I/O terminals from Beckhoff to control its servo presses in the mid and high performance ranges.
The transfer units that connect several presses are also controlled by PC-based control. According to Sotoyuki Kaneko, head of Aida’s System Control Department, this control platform has also been tried and tested in vehicle manufacturing for the European market with their high metal forming requirements. In this demanding environment, it is not uncommon to use large tandem lines of servo presses with six different process steps.

The prerequisites for the smooth operation of such a large-scale plant are optimum control and precise synchronization of the numerous presses and transfer units that carry out the individual process steps.

According to Sotoyuki Kaneko, EtherCAT has proven to be the best solution for the implementation of the Aida system on account of its precise synchronization and high-performance data transmission capabilities even over long distances: “In 2000, our group’s Electronic Development Department began work on a next-generation motion controller, which was intended to replace the internally developed controllers we had used up to that point in time.

The fundamental decision to use a PC-based control system was taken at the same time. The optical fiber-based Lightbus was the established Beckhoff fieldbus at that time. I can still remember very well how excited company founder Hans Beckhoff was when he informed us that the introduction of the new fieldbus standard EtherCAT was imminent. Then EtherCAT came onto the market as an open fieldbus, supporting extremely fast speeds, precise synchronization and long-distance data transmission up to 100 m via a standard Ethernet cable. That met all the requirements for the Aida presses, so we chose EtherCAT.”

Besides that, Sotoyuki Kaneko says that there were obvious benefits in replacing previous internally-developed controllers with Beckhoff components as the standard control platform for Aida presses: “If we had continued to develop the control systems ourselves, we would also have had to develop all the I/O terminals connected to the system. In view of the enormous number of I/O terminals required for the wide variety of individual customer specifications, this would have been virtually impossible for us. Beckhoff offers not only a wide range of IPCs, but also the widest variety of I/O terminals for all necessary signal types. The huge product range, extensive engineering expertise and global distribution network were important reasons why we opted for Beckhoff.”

He adds that another crucial factor was the flexibility of the control platform. The IPC concept perfectly suited Aida’s design philosophy because all necessary control functions could be integrated with the highly flexible TwinCAT automation software.

In the servo-based tandem lines each of the machining processes is controlled by an IPC as the EtherCAT master. These communicate in turn with each other via EL669x bridge terminals. A further high-performance Industrial PC serves as a higher-level controller with the EtherCAT “master clock”, which ensures seamless synchronization of all presses and transfer units.

In the tandem line, a robot handles the transfer of workpieces from one process to the next. The appropriate distance between the robot and the forming tool is the most important factor in achieving high productivity and efficiency: the smaller the distance, the more products the press can process. If the distance is too small, however, this may cause disruptions that can increase the risk of system failures.

For this purpose, Aida developed a TwinCAT-based solution featuring an ultra-fast control cycle, optimum synchronization and minimized robot distance with a high level of production reliability. In this way, the servo tandem line achieves 20 strokes per minute and approximately 50 % more efficiency than the predecessor series as a result.

Also integrated in the servo tandem line is the Aida Digital Motion System (ADMS) software, which allows operators to freely and conveniently configure press motion parameters for each line. ADMS is able to determine the optimal process control simply on the basis of the form data entered for the sheet metal part. The motion sequences can be fine-tuned on the user interface on site. Apart from that, the motion controller can be adjusted in advance using an offline 3D simulator. As EtherCAT slaves, I/O terminals collect a multitude of data such as the tool position, information about the servomotor for positioning the handling robot as well as sensor data. Based on the control data processed by TwinCAT in real time, ADMS simulates the motion sequences and generates corresponding path control data. Sotoyuki Kaneko explains: “The system benefits from the fact that TwinCAT can integrate the most diverse data into the runtime environment and send real-time feedback to the PLC and motion controllers.”

By its own account, Aida is one of the pioneers in the development of IoT systems and, according to Sotoyuki Kaneko, EtherCAT components are strong innovation catalysts in this field, too. One example of this is the Aicare system (Aida Information Care), based on Microsoft Azure. Aicare monitors and visualizes important press data such as product quality, operating parameters and maintenance information.

Multiple data sets have to be acquired synchronously and in succession to analyze the quality of the formed parts. Aicare does this with the help of EtherCAT distributed clocks. As all data are given a timestamp and clearly identifiable in this way, the formed part quality achieved with each stroke can easily be analyzed in retrospect. In this context, a machine learning process (Support Vector Machine) is used, which according to Kaneko was easy to implement using PC-based control.

Operational data, including data on temperatures and energy consumption, are securely sent to Azure cloud services and can also be viewed on the Aicare web page. Authorized persons automatically receive any alarms and error messages. Regarding these features, Sotoyuki Kaneko concludes: “Aicare benefits enormously from real-time communication with EtherCAT and from PC-based control, because these technologies enable simple integration with cloud services such as Azure and the use of advanced IoT technology.”