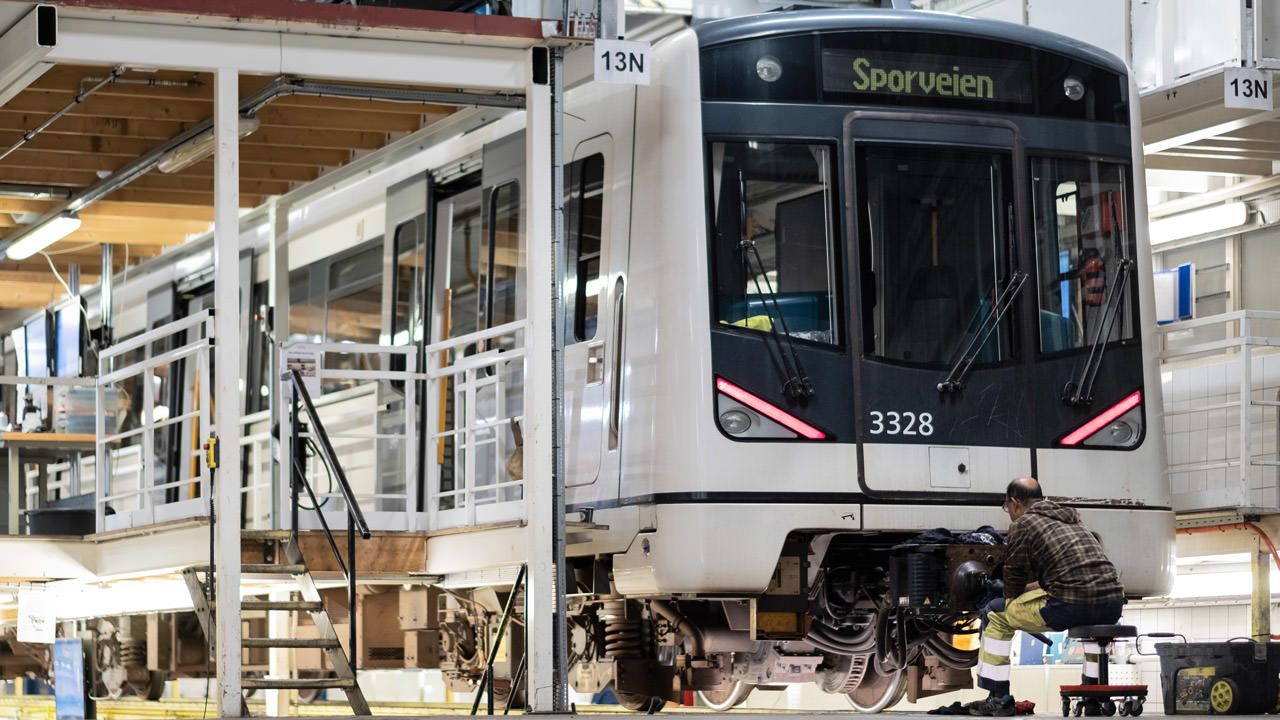 A modern radiolocation solution helps the operator of the subways in Oslo, Norway to provide a high-performance and attractive offering. In recognition of the city's efforts towards a sustainable way of life. public transport and the subway as an alternative to a car, represents an important pillar of the concept.

The “T-Bane” tunnel railway is what the people of Oslo call their subway, although just 17 out of the 101 stations are actually underground. The 115 trains operated at present carry almost 350,000 passengers daily on a rail network spanning 86 km.

In order to achieve the ambitious climate goals of the city of Oslo – reduce CO2 emissions by 95% by 2030 and in doing so becoming a car-free city – the subway network makes a significant contribution. Notwithstanding the achievements made so far, Sporveien, the subway operator, cannot rest on its laurels: Because if the residents of the Norwegian capital are to do without the car, they need an attractive and increasingly powerful alternative – like the T-Bane.

For years, the city, transport association, and operator have been investing in the climate-friendly expansion of the subway network. The train fleet has been undergoing modernization since 2007 and today is entirely equipped with white, energy-efficient trains of the MX3000 series from Siemens. New lines and stations are planned and being implemented, such as the new Løren station on Line 4, which was opened to traffic in 2015. Sporveien is currently working on increasing train frequency through the central inner-city tunnel, which is shared by all lines: In the future, 9–10 trains per 15 minutes are to be able to pass through the bottleneck, which means a capacity increase of up to 25%.

Digitalization in the workshops 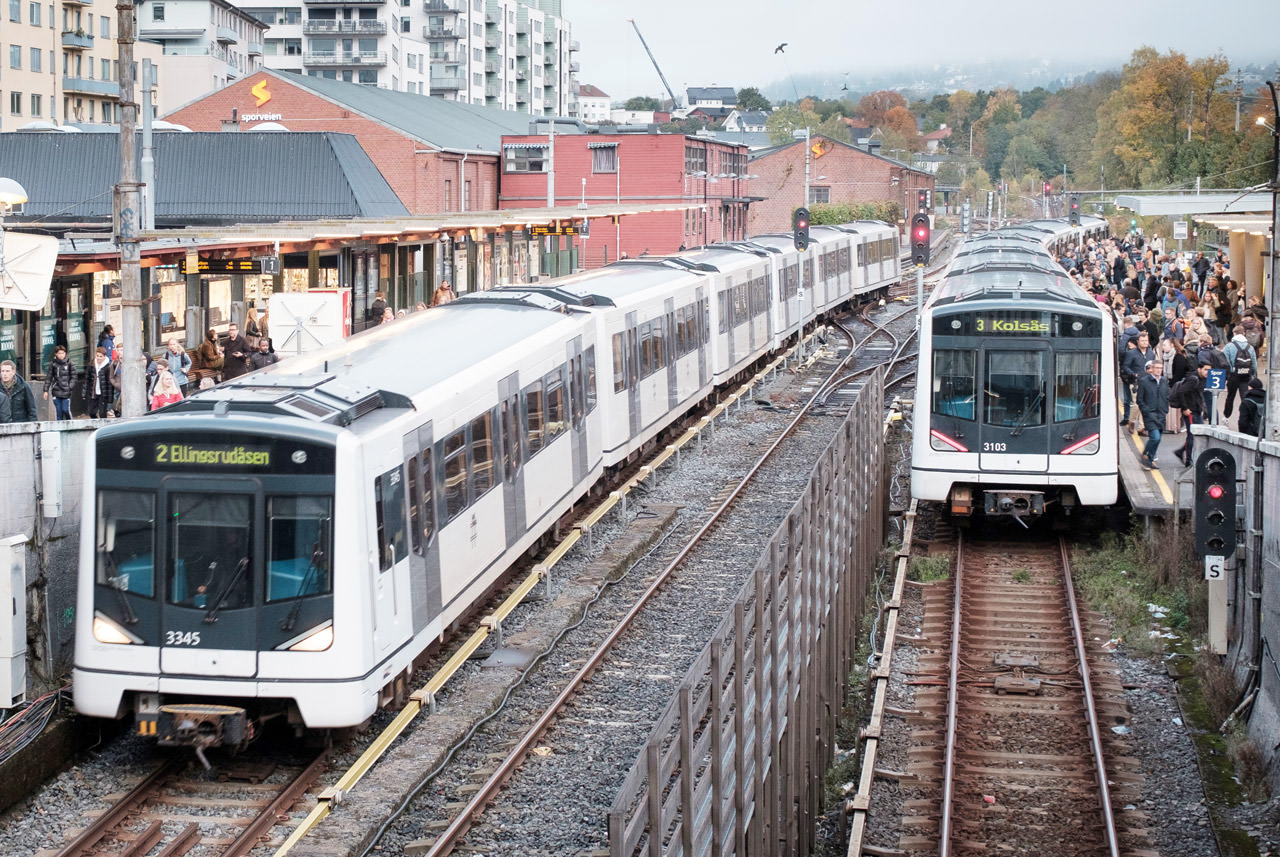 Public transport systems form the backbone of individual transport in Oslo – and the T-Bane has a substantial part in it.

Behind the scenes, too, the modernization of the subway system is being spurred on. Digitalization is the motto here to automate planning processes, reduce failures, improve flexibility, gain higher efficiency and decrease response time.

Numerous digital systems are already in use at Sporveien – e.g. digital timetable and digital maintenance records for the trains. However, digital systems can only process the information that is fed to them. Posing a potential problem here, were the depots and the manual processes around parking-lot planning and physical parking of trains. Previously, there used to be more manual work-processes in the depots – much due the position of the trains could not be automatically synchronized with the digital workshop system.
Manual effort, hectic phone calls, and unnecessary searches were part of the daily routine of the employees, which caused some process-inefficiency getting the rolling stock ready. In particular, the manual search processes, picking out the specific train at the correct time, did cost time. Valuable service-time elapsed quickly if an employee in the depot had to walk around in the yard searching for a specific train.

A real-time locating system Simatic RTLS from Siemens now helps to put things right. In order to do so, all trains were equipped with transponders and antennas, which can continuously and fully automatically be located via so-called RTLS gateways. To this end, the transit time of the radio signals to the transponders is determined and compared between different gateways – within fractions of a second.

All information is fed into the visualization in the workshops of Sporveien via the Simatic Locating Manager and combined with other systems, for example, the maintenance planning for the trains. Employees can now see the positions of each train in each depot on large displays and retrieve all other necessary information (What is to be done? When must the train be back on the line? When is the next service due?). 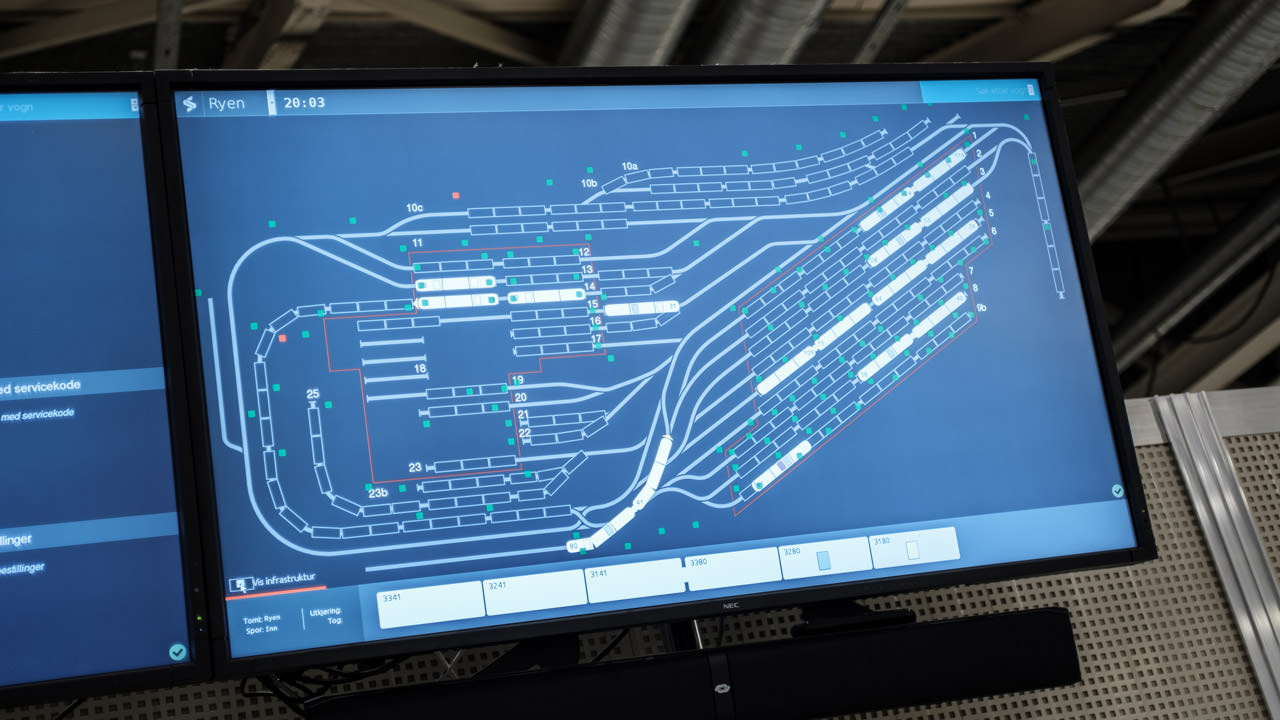 On large displays, employees can retrieve all the data for each vehicle – including the current location in the sprawling depots.

This transparency is already an important advantage of the locating system for Christian Grønnerød, RTLS product manager at Sporveien. “Just the visualization of the train movements in the depots and the combination with all other systems make the work considerably easier. Instead of through a variety of programs, paper documentation, and phone calls, employees now have everything at their fingertips and with just a few mouse clicks get what they need to perform their job!” said Grønnerød.

But that is not all. The improved and accurate planning and provision of the trains means that the service intervals can be maximized – which improves fleet utilization and reduces costs. Also, solving any breakdowns is greatly simplified, because it can be seen at a glance which train is present in which depot. And the project team is already thinking about more ideas – as you know, appetite comes with eating.

The first ideas for the introduction of RTLS go back to 2017. Initial proof-of-concept tests showed early on that the Siemens solution is particularly well-suited to the requirements of Sporveien. First of all, the possibility to operate Simatic RTLS from Siemens both indoors and outdoors spoke in favor of the system. The system scalability, too, is an important advantage: Thus, the implementation in the project can be carried out step by step, while still gaining experience early on in actual operations.

Last but not least, the special industrial suitability of the components is a decisive argument: Antennas and transponders are sufficiently robust for daily use in trains subject to temperature fluctuations and vibrations, and the interfaces of the transponder allows feeding of signals from the trains (direction of travel, coupling status). There are now approximately 250 gateways in use, and each train is equipped with two transponders and antennas (at each driver’s cab). 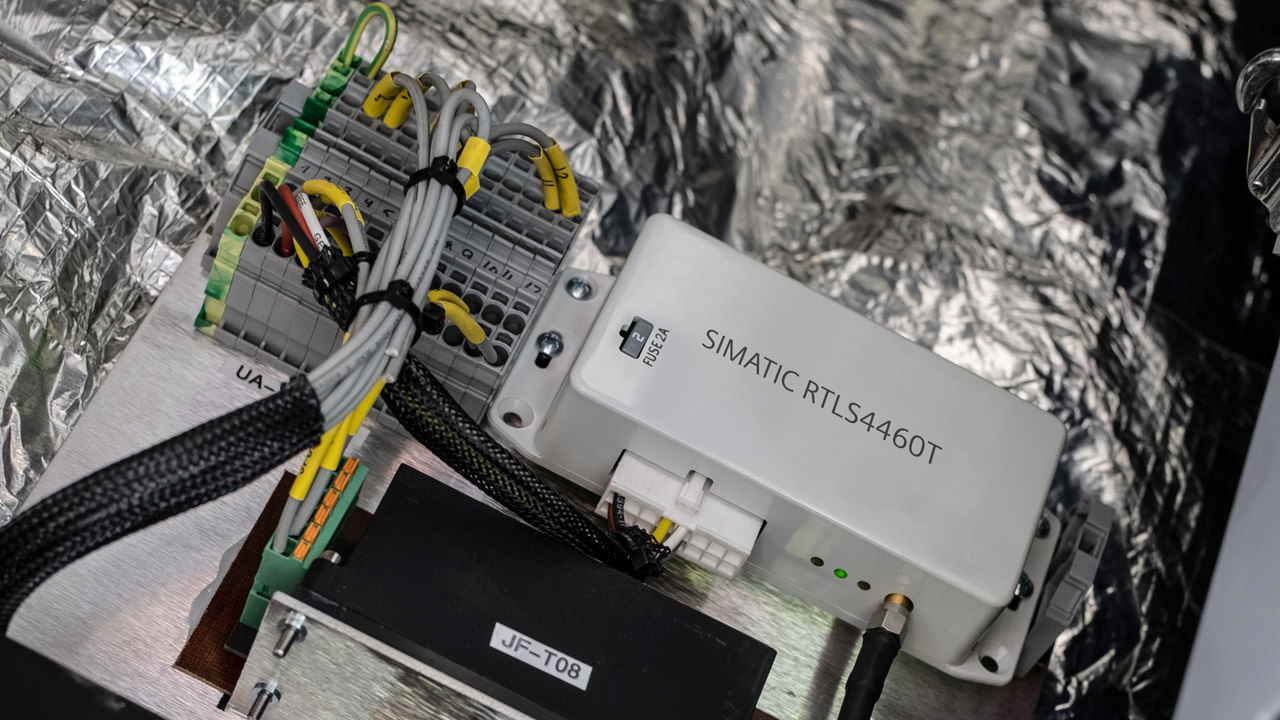 The RTLS transponders also transmit other information from the vehicles (direction of travel, coupling status).

As project manager of Norwegian consultancy company Bouvet, Bjørn Stokkeland was responsible for the introduction of Simatic RTLS. In addition to selecting the technology supplier, numerous other aspects had to be clarified – ranging from the conversion of the trains to the IT interfaces.

Thanks to a clear expectation of results and an agile approach with defined project sprints, the actual implementation could be completed in just a few months. And that even though several partners were involved in the project: Siemens supplied the RTLS technology and equipped the trains with transponders and antennas, and a local company installed the infrastructure in the depots. In addition, Bouvet took the role of a software system development partner of Sporveien, developing the tool that handled the visualization and system integration.

In addition, RTLS specialists from Siemens provided live support from Chemnitz (Germany). According to Stokkeland: “In my long career, I have not experienced a project that was as easily implemented. The agile development process involved a lot of stakeholders, and the end users were some of the key group. That was a great achievement for everyone involved!” Christian Grønnerød added: “We are really very satisfied with both the technology and the management of the implementation project on Siemens side. This has become a great benefit for us.”

Proven from the first day

In practice, SIMATIC RTLS has proven itself from the very first day. On the one hand, Sporveien employees were impressed by the high locating precision. “We are accurate to about 20cm,” reports RTLS product manager Grønnerød: “Of course that is not needed for the trains, which are significantly larger.”

However, this accuracy of SIMATIC RTLS creates the prerequisite for possibly adapting other workshop processes to real-time locating – after all, the installed gateway infrastructure can locate much more than just a few trains. The availability of the system also far exceeds Sporveien’s expectations, aided by the status monitoring of the RTLS infrastructure integrated into the visualization.

The users in the workshops, too, became fast enthusiasts of the new technology. “Such projects often require a lot of coordination effort and come with many change requests,” stated project manager Stokkeland. “But in the case of RTLS, all colleagues were immediately convinced of the advantages.” The new systems ultimately enable employees to concentrate on their actual tasks without wasting time on searches, phone calls, or unnecessary detours. “The acceptance is really enormous,” said Stokkeland.

Punctual provision of trains, reduction of running costs for service and maintenance, and increase of capacities in depots: For Sporveien, Simatic RTLS is another important component for the continuous improvement of public transport services. So that the people of Oslo have one more reason to exchange the car with the subway.