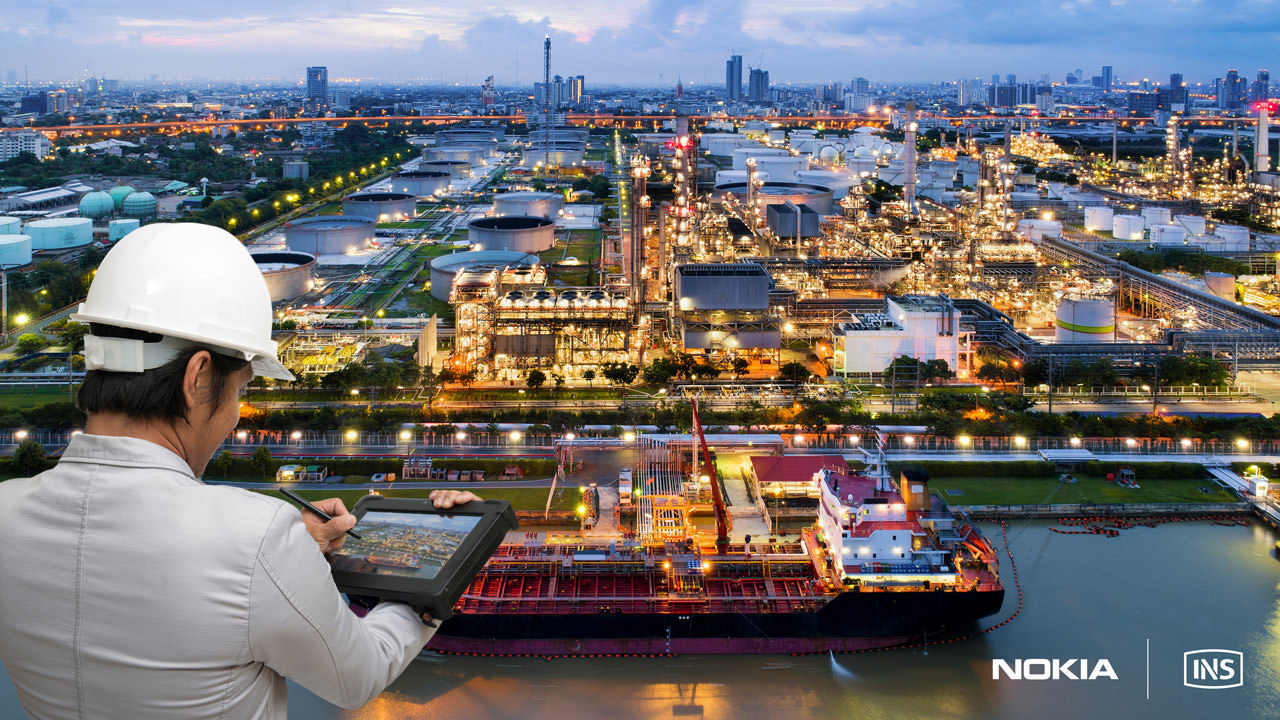 Wireless Ethernet technologies such as Wi-Fi or low bandwidth 900 MHz networks are often challenging and cost-prohibitive to use in industrial applications. In many cases, these wireless applications required numerous access points to cover the necessary geographic coverage area did not handle mobile assets well, were expensive to install and, worse, were often-times unreliable when installed. As a result, bandwidth is often “turned down” to ensure higher reliability while using these network technologies in industrial plants, making expandability difficult.

In the last couple of years, Private Long-Term Evolution (Private LTE or pLTE for short) network technology has emerged to solve the weaknesses of Wi-Fi and 900 MHz networks described above. pLTE leverages localized micro towers and small cells — conceptually like Wi-Fi access points — to provide coverage and connectivity. Thus, it functions like a scaled-down version of a public cellular network, and it can be based on licensed, unlicensed, or shared spectrum. This technology breaks many legacy barriers associated with wireless technologies and allows a broader range, more mobility, better security, and fewer infrastructure components. 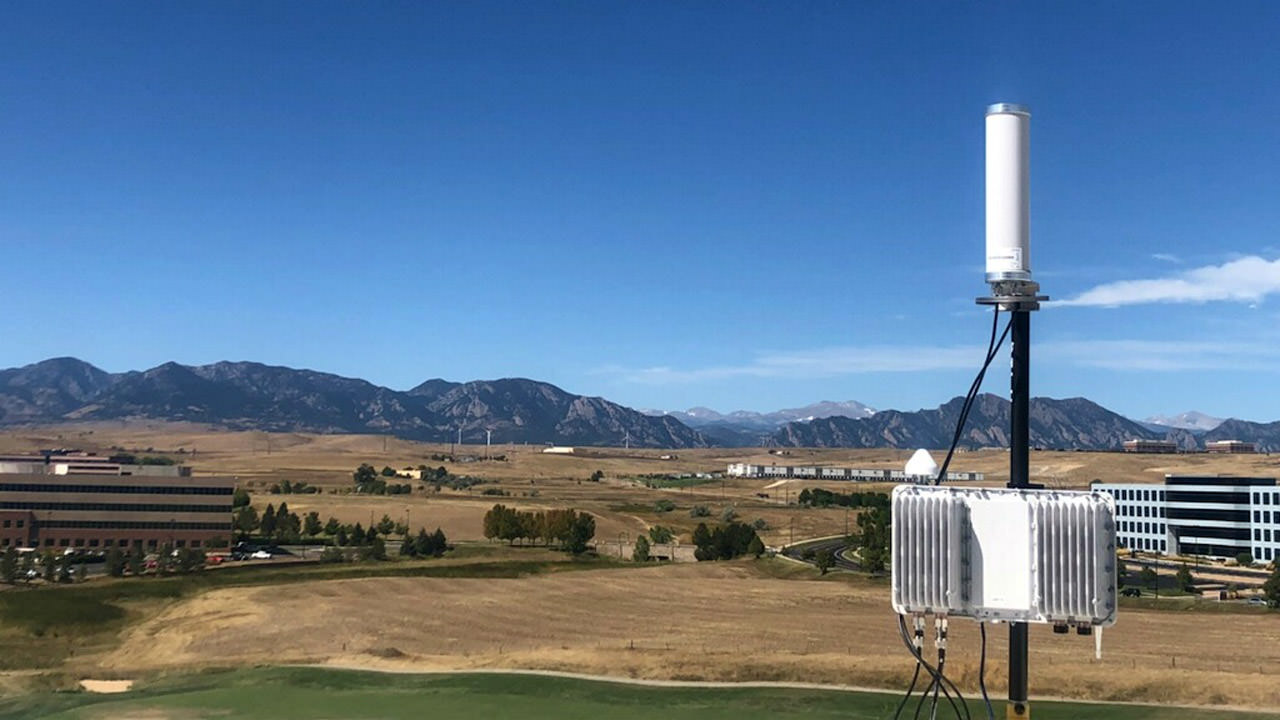 What is Private LTE?

Private LTE is a local and private cellular network that includes cell sites and core network servers dedicated to supporting the connectivity of a specific organization’s requirements, independent of the cellular networks of service providers. It enables organizations to customize their networks for mission-critical applications, optimize the network for low latency and support specific SLA – all without interference from the often-congested public wireless spectrum.

Citizens Broadband Radio Service (CBRS) is a band of the radio-frequency spectrum from 3.5GHz to 3.7GHz that the Federal Communications Commission has designated for sharing among three tiers of users: incumbent, priority licensees and generally authorized, which is unlicensed. CBRS enables enterprises to build private 4G/5G networks, which results in improved 4G/5G offerings from service providers. 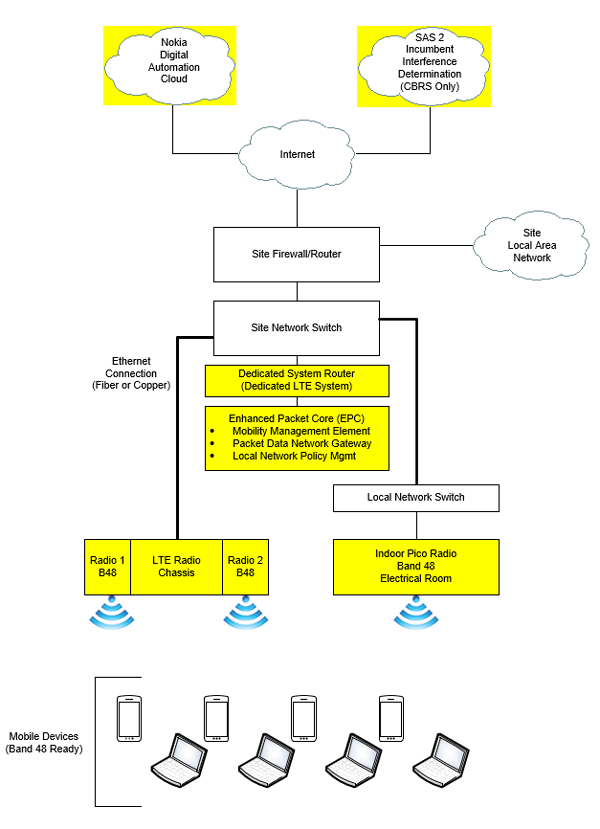 Essential components of a pLTE architecture.

Often when we hear “LTE,” it’s easy to get a little nervous as some may assume is any “cellular” application is complicated, expensive, and must involve a major cellular carrier. To that end, there’s quite a bit of debate in the industry about removing the term “LTE,” as it brings confusion to potential users; therefore, some industry stakeholders refer to this technology as “private wireless.” To be clear, a pLTE network is not a complicated architecture. The technology does not involve a public carrier network, and anyone who has deployed industrial Wi-Fi and 900 MHz wireless networks can quickly pick up on pLTE technologies. Since 2011, when Nokia deployed the world’s first pLTE networks, the solutions have evolved to fit many applications that do not involve a major Telco, Communications Service Provider or Managed Network Offering.

Below we will review the essential components of a pLTE architecture.

Recent changes in the allocation of the public wireless spectrum have made it possible for organizations to install a private wireless LTE network, controlled by the user, and free of any recurring data charges paid to a carrier. Introduced by the FCC in 2020, Band 48 CBRS (Citizens Broadband Radio Service) is often referred to as private LTE. It is the frequency band of 3.5GHz, operating in the LTE spectrum in the United States. The 3.5 GHz CBRS band provides a shared spectrum that allows industrial users to accelerate their Industry 4.0 transformation. It uses the CBRS band to deploy industrial-grade private wireless networks connecting critical assets and supporting mission- or business-critical operations. Long Term Evolution (LTE) telecommunications networks use several frequency bands with associated bandwidths.

Below is a snapshot of CBRS in the LTE spectrum:

When to Choose Private LTE Network Over WI-FI?

Wireless Ethernet (Wi-Fi) provides many benefits, including easy-to-use, open standards and generally reliable use for mobile devices. However, the question most frequently asked is, “when should pLTE be preferred over Wi-Fi?” You should consider pLTE if you need:

Choose pLTE if you need seamless wireless coverage over a large campus or facility. Whether it’s outdoor, indoor or some mix thereof, pLTE has far greater range and better signal penetration into buildings and areas with significant outdoor metal infrastructure than Wi-fi. A single pLTE radio/access point can provide as much as 10-20X as a traditional Wi-Fi access point for a typical deployment.

pLTE is highly predictable in terms of wireless data rates and latency.

Private LTE can connect many devices and mobile workers to a wireless LAN with fewer antennas than Wi-Fi. LTE technology is designed to provide hundreds of concurrent endpoints with high bandwidth and low latency connectivity per “micro tower” antenna. At the same time, Wi-Fi can only reliably handle a few dozen clients per access point.

If you have mobile assets and people “on the move,” private LTE will outperform Wi-Fi significantly. It seamlessly processes the hand-over of multiple fast-moving clients between “micro tower” antennas without data loss or a hike in latency.

Are you concerned about hacking or eavesdropping on a Wi-Fi network? With Private LTE, you provision and distribute private SIM cards for end devices connecting to your network. No SIM card? No connection.

An excellent example where pLTE performs very well is outdoor mines and quarries. Quarries often encompass large areas with rolling terrain, mobile vehicles and workers, and broad distribution of industrial systems that require network integration. Usually, quarries have a combination of single-mode fiber optics, wireless Ethernet bridged networks, and local wireless access points for coverage over a small area of the quarry. Unfortunately, over the years, legacy wireless networks make it difficult for the quarry to add new intelligent edge devices, provide business system integration to mobile workers, get real-time information, and collect or historize data. Below is a snapshot of the area of coverage for this quarry example. As seen below, the quarry has dimensions of 1 mile by ½ mile with elevation changes of approximately 150’.

The quarry has dimensions of 1 mile by ½ mile with elevation changes of approximately 150’.

For this application, Industrial Networking Solutions (INS) installed and updated the industrial control network with the architecture below.  Is there anything that stands out? 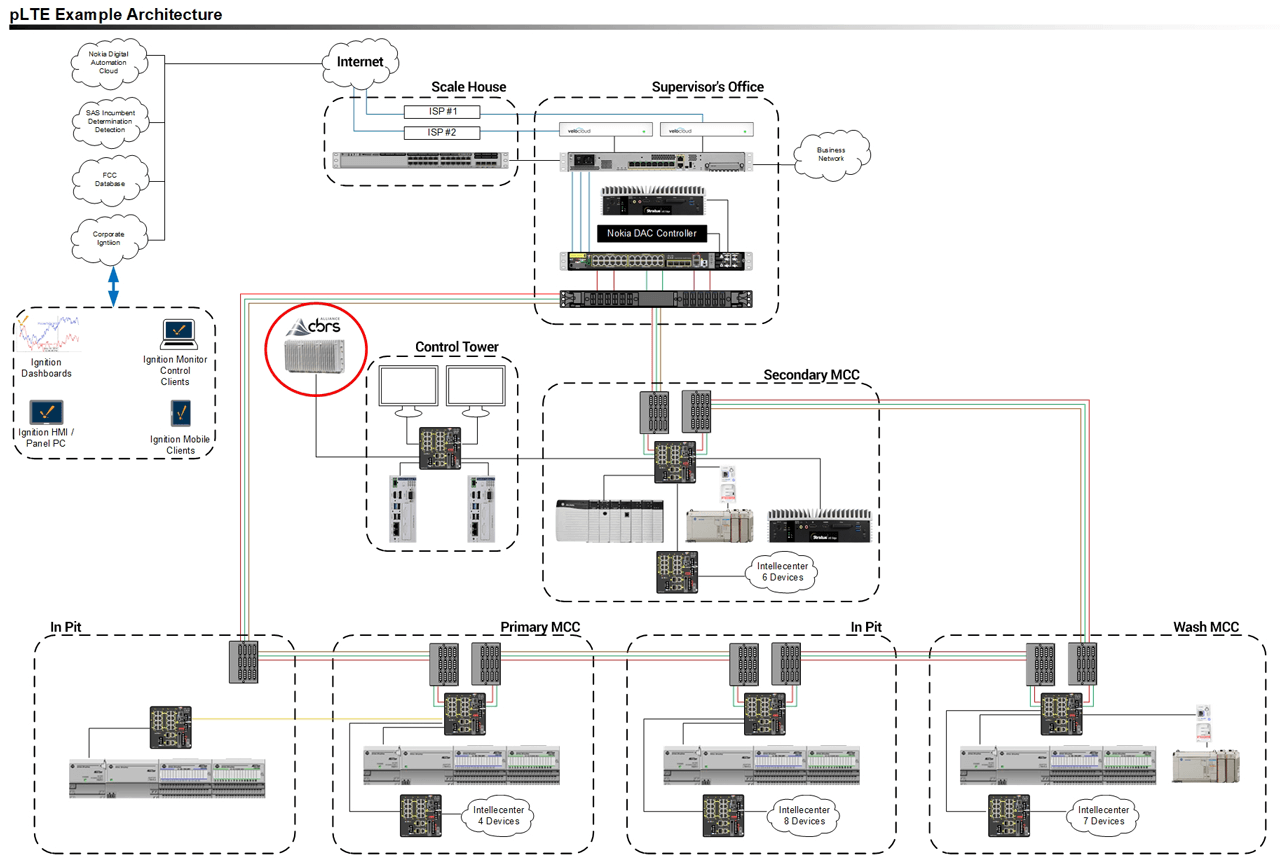 Industrial Networking Solutions (INS) installed and updated the industrial control network with the architecture above.

Notice for this entire quarry; a single pLTE radio was utilized. That’s not a misprint. A single pLTE radio provided mobile worker and loader coverage for the entire one x one and ½ mile quarry campus. The photos below show the installation for the pLTE radio and a CBRS enabled cellular router on a loader.

A single pLTE radio provided mobile worker and loader coverage for the entire one x one and ½ mile quarry campus.

INS is a strategic value-added reseller (VAR) for the Nokia Digital Automation Cloud (NDAC) private LTE solution. Nokia’s Private LTE Network infrastructure includes a dedicated LTE core server installed at the customer facility (Nokia Digital Automation Cloud) with associated micro-towers to provide the wireless coverage of the site. End devices are supplied with private SIM cards to allow access to the Private LTE network. For customer devices and area networks with an Ethernet or serial port, SIM-enabled LTE gateways can provide the LTE network connection. In addition, a cloud-based management system allows the customer to monitor and manage their Private LTE system from anywhere and create links between distinct enterprise Private LTE networks.
INS has teamed with Nokia to provide their market-leading private LTE network infrastructure and endpoint connectivity to the industrial marketplace. Nokia certified INS engineers perform site surveys to determine the suitability and scope of a Private LTE system. Once an architecture is approved, INS engineers install the network and train customer personnel to manage their new system. Plus, we continue to provide ongoing technical support after the installation.