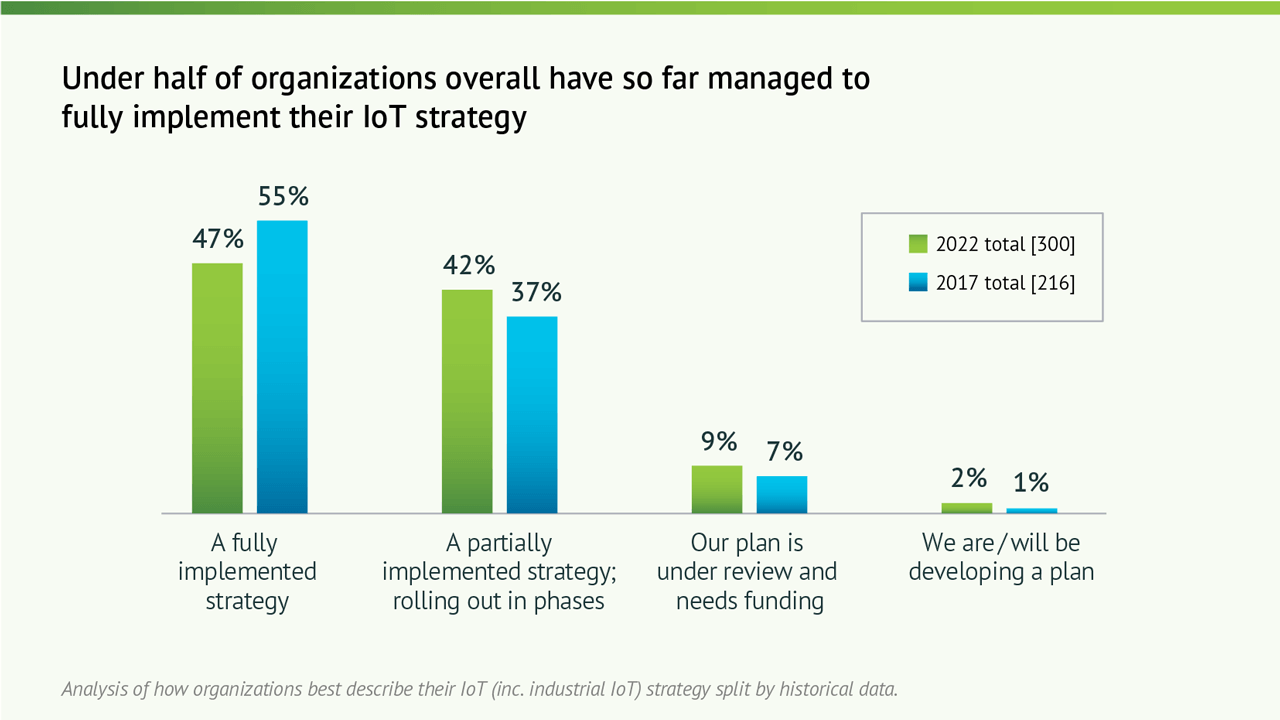 Wi-SUN’s latest research report shows that organisations are becoming more ambitious and sophisticated in their thinking. IoT is now a bigger priority than ever, and the scale of what is being planned over the next few years is encouraging.

In 2017, Wi-SUN Alliance published its first research report on the state of the IoT industry. It made interesting reading as the early adopters of IoT technologies highlighted the challenges and barriers (as well as the opportunities) to adoption. We revisited this ‘state of the nation’ report this year to see how perspectives and adoption patterns have changed over the last five years.

Half of the survey respondents, IT decision makers who are IoT adopters in UK and US organisations, view IoT enablement as a top three priority for the next 12 months, and it is also most likely to be the single top priority among the respondent base.

As the use cases mature and organisations see repeated successes among their peers, they are looking increasingly to the technology as a way to differentiate themselves. More than nine in 10 respondents believe that they must invest in IoT over the next 12 months to remain competitive. IoT technologies can help drive reliable systems and services. Adopters believe that implemented correctly, IoT could help to make them more agile, which is a key driver for adoption this year.

This equips them to meet volatile operating conditions during a pandemic that has changed everyone’s operating rules.

Private businesses and public sector bodies alike need to enhance their user experiences, as they grapple with new ways to engage people in no-touch and remote environments. This is especially true in smart cities, which are looking for ways for increasingly dense populations to co-exist alongside each other. 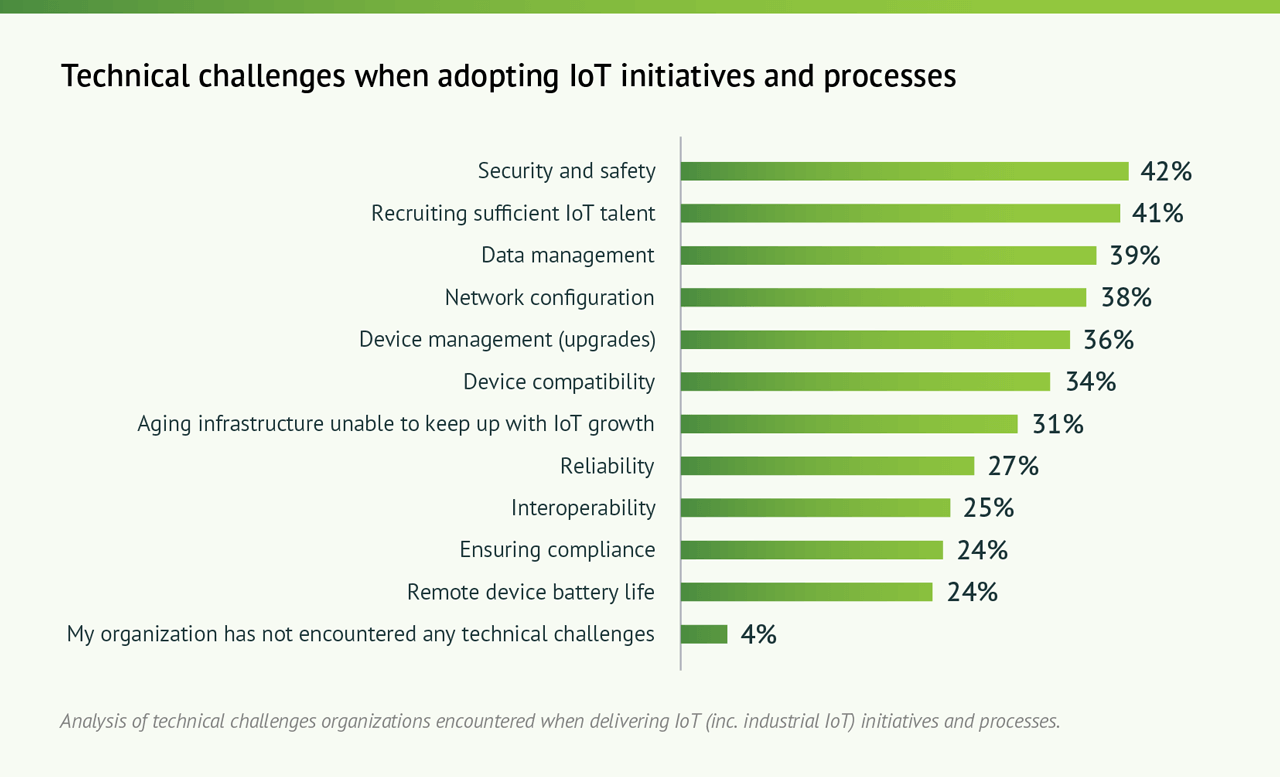 Adopters might recognise the importance of IoT projects and the need to invest in it regardless of size or sector, but they still have plenty of work to do. Our research this year indicates that fewer than half (47%) of all companies have a fully implemented IoT strategy, while 42% have a partially implemented strategy, and 11% a plan that is either under review or still in development.

The UK is falling behind, with fewer than four in ten (39%) organisations with fully implemented IoT strategies compared to just over half (51%) in the US.

What is encouraging however is that respondents responsible for smart cities, smart utilities, and industrial IoT (IIoT) projects have advanced across the board. Almost 70% of companies have implemented their smart city initiatives, up from 42% in 2017. Full IIoT project implementation has risen from 46% to 65%, while half of companies with smart utility strategies have delivered, up from 38% five years ago. Fewer projects are now in the pilot/testing stage, demonstrating the progress made over recent years.

But it seems that the journey to IoT maturity is not without it challenges. 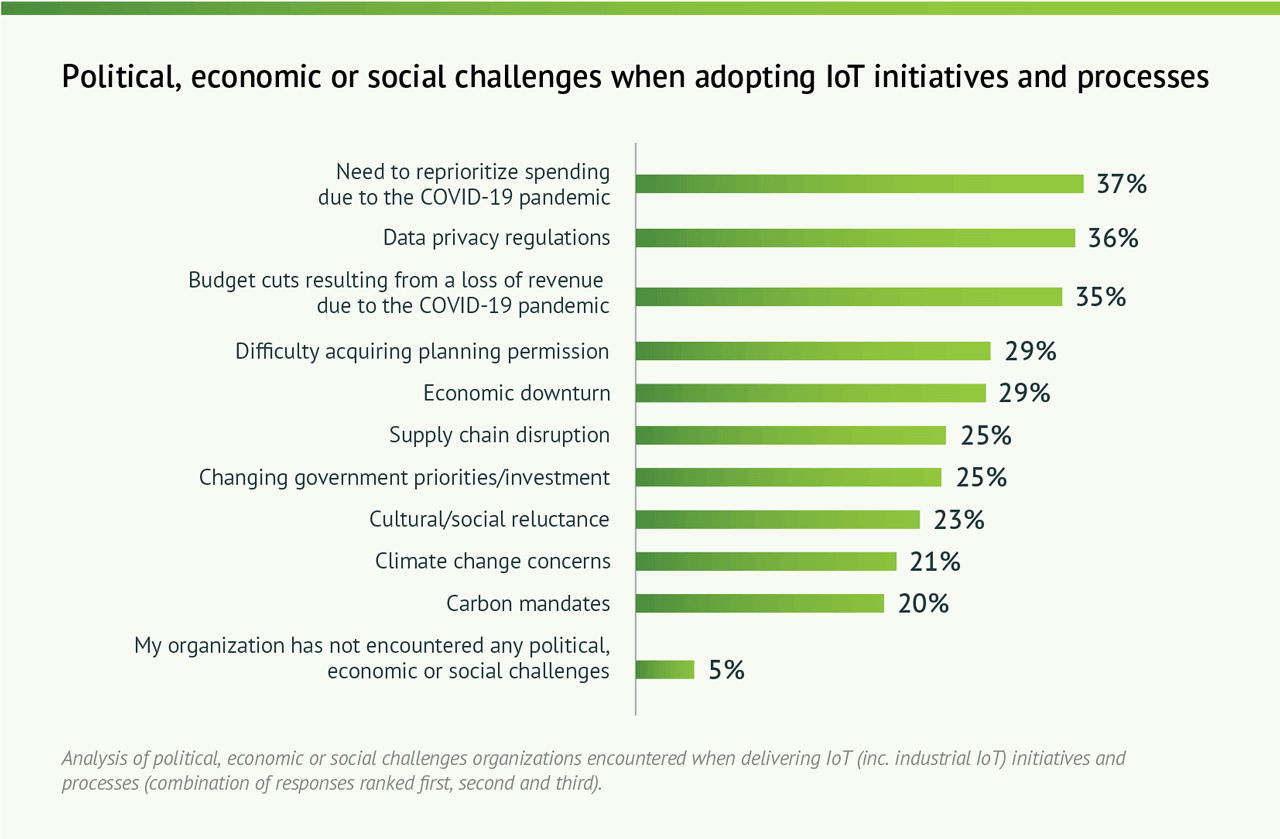 Focus on security and compliance of IoT projects

Our survey respondents are focused more heavily on the security and compliance of IoT projects than they were five years ago. Since 2017, stricter privacy laws have increased pressure on organisations to protect sensitive data in the UK and in the US. This includes the General Data Protection Regulation (GDPR) in Europe and the California Consumer Protection Act in the US.

The focus is strong in the UK, where more than half (53%) of organisations include secure data collection in their IoT strategies, compared to just a third (34%) in the US. But the UK’s concerns over security and data usage doesn’t overshadow its focus on the benefits of the technology. With 47% of UK organisations including data usage strategies in their IoT plans, they are still connecting their IoT strategies firmly to business goals.

As IoT strategies mature, security is becoming far less of an issue than it was five years’ ago. Those respondents ranking it as one of their ‘top three challenges when rolling out IoT’ dropped from 58% in 2017 to 24% in 2022. The number of IoT adopters viewing security as a technical challenge also fell, from 65% in 2017 to 42% this year. 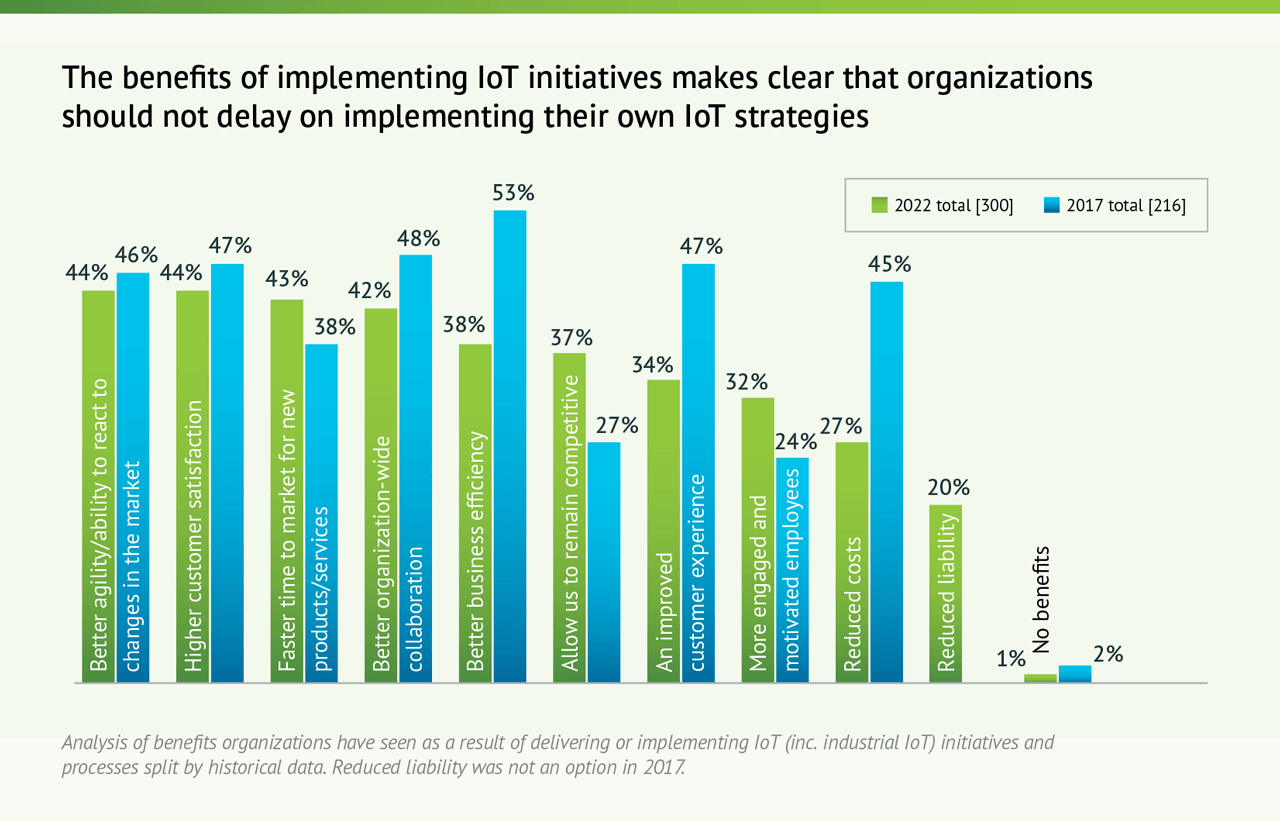 The Benefits Of Implementing IoT Initiatives Makes Clear That Organizations Should Not Delay.

But organisations are still eager to ensure their IoT systems are secure. Our latest report shows a slight rise in the proportion of respondents demanding proven security with multi-layer protection and continuous monitoring when considering smart city solutions. This is either very important or critical for 86% of respondents, compared to 82% in 2017. They might be more relaxed about security challenges thanks to protection like device identity certificates, but they also understand its importance more than ever and demand secure implementations from vendors.

While some barriers to adoption have eased, others have increased, as companies comprehend the full implications of designing and deploying IoT solutions. One of these is data privacy, which has become more of a concern as security concerns fall.

IoT projects by their nature have the potential to generate huge quantities of data. Even if this information is secure, handling it responsibly represents a privacy risk. Managing large volumes of data is technically difficult, especially when regulators interpret it as sensitive personal information. Organisations that mishandle or misuse it risk running into regulatory or compliance issues.

Data privacy regulation is ranked as the second most important political, economic or social challenge for IoT adopters, with 36% placing it in their top three. Fears over big data have jumped to 19% from 11% placing it in their top three IoT rollout challenges in the last five years, and one in four respondents cited regulatory concerns. Five years ago, the IoT market was less mature with many smart city and smart utility projects in their infancy.