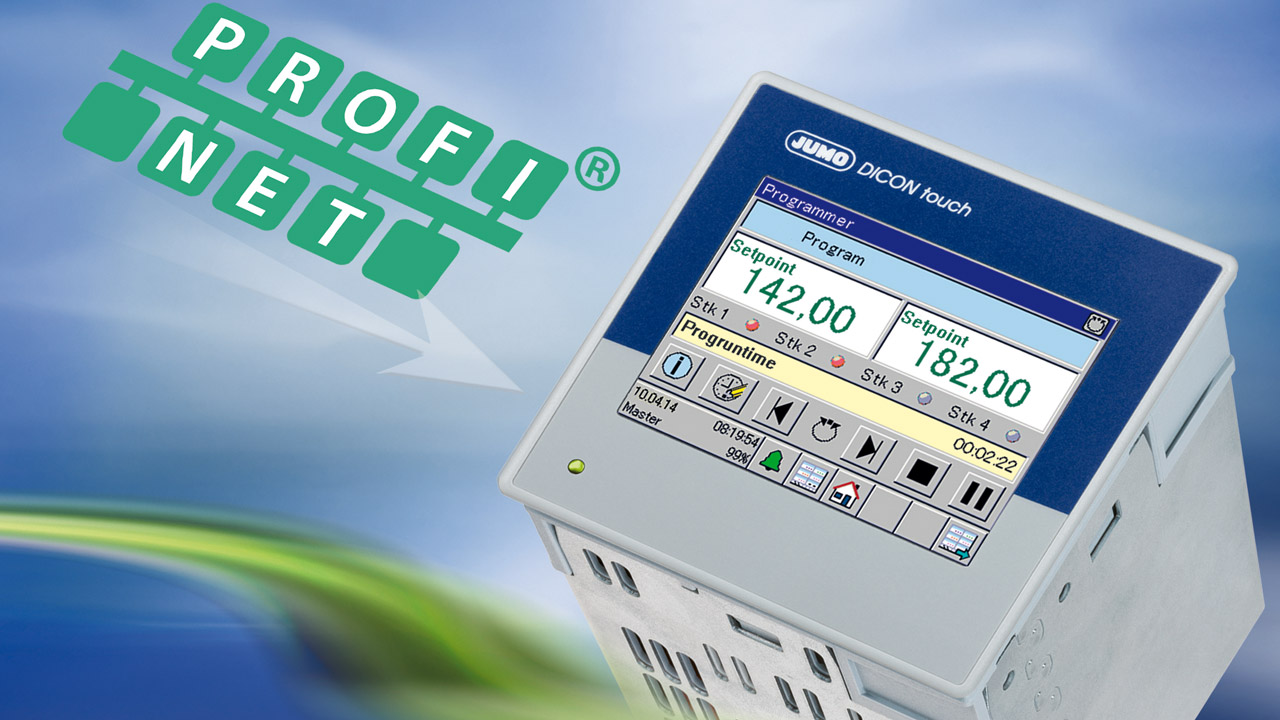 Digitization is shifting toward the sensor in the era of Industry 4.0 process automation. Implementation of smart sensors that can be integrated anywhere in a complex network allows them to pass on the digital form of recorded physical quantities over the network, versus digitizing analog signals transmitted to a controller.

The shift toward digitization driven by Industry 4.0 and the Industrial Internet of Things (IIoT) can be seen in industrial automation technology. The production floor is changing. Individual production sites are being networked; they communicate with one another and between different company divisions or even across company boundaries.

The effectiveness of overall production can be significantly increased through condition monitoring and optimization of mechanical installations and technical systems. However, this requires constant communication between all participants in the enterprise, whether human or machine, to exchange countless volumes of data and a wide variety of parameters.

Shifting toward the sensor 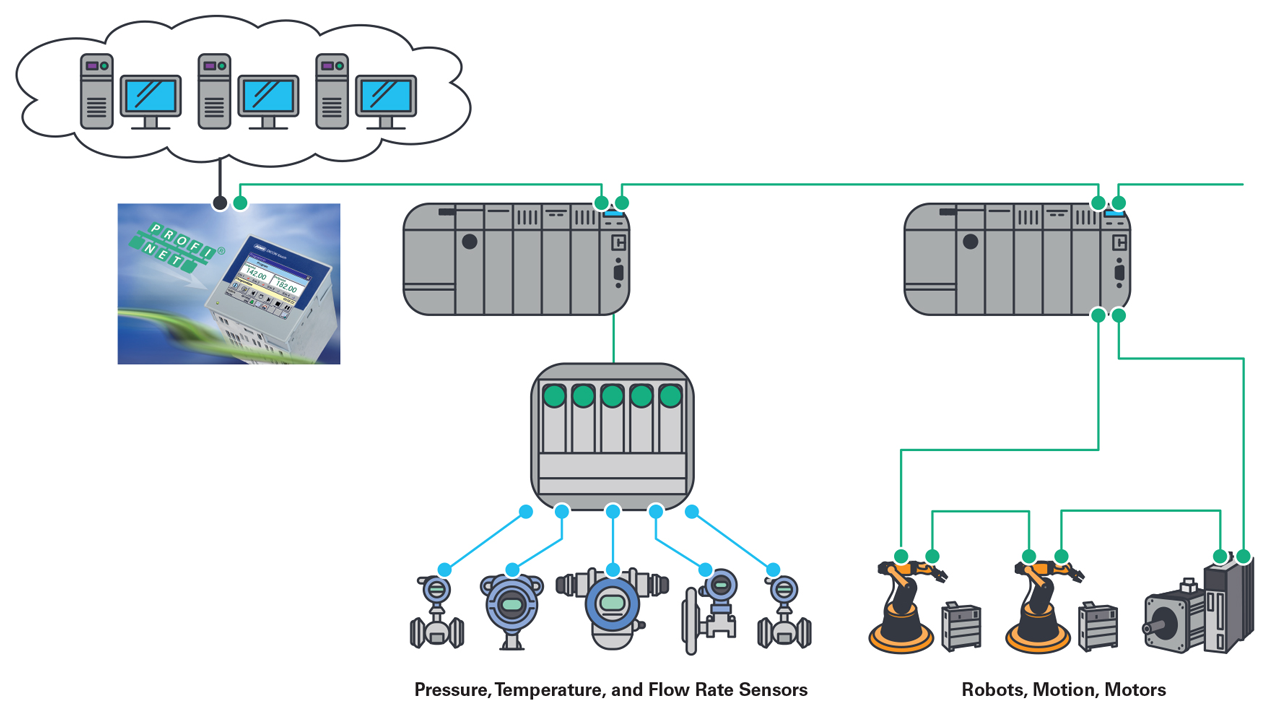 An application example of the various participants in a networked factory.

in the era of Industry 4.0, digitization is shifting toward the sensor. Where connectivity was once handled relatively simply, the analog sensor signals from the various systems were transmitted to a central controller and digitized there.

The implementation of so-called smart, intelligent sensors that can be integrated anywhere in a complex network allows them to pass on the digital form of the recorded physical quantities over the network. Apart from the actual measurement parameter sensing, this intelligent sensor unites a major part of the signal conditioning and processing in one housing.

Furthermore, the smart sensors are often already equipped with a bus interface. Through the digitization of the measured parameters, significantly more data can be transmitted and at a faster speed. Another advantage lies in the more robust signal transmission. Through the digital signal transmission, signal changes and interference can be lessened or even completely prevented.

In addition, in the ideal case, the bus-enabled sensors can be connected to the network via plug and play, meaning they are automatically detected by the control unit. If one sensor fails, the others continue to function.

However, all of this requires an omnipresent, highly reliable, and real-time-capable network extending from the individual sensors and actuators to the machines and finally to the complete systems. Ethernet—especially Industrial Ethernet—has emerged as a key set of communication standards. Compared with previous field buses, Industrial Ethernet provides decisive advantages such as efficient and synchronous transmission of larger data volumes on a shared transmission medium. In addition, Industrial Ethernet offers the possibility to create the entire communication on a uniform basis, which complements the classical Ethernet with real-time extensions for determinism.

In addition, any host processor can be connected with the switch chip through its configurable memory bus interface. The flexibility of the fido5000 REM switch allows developers to future-proof their designs despite constantly evolving standards because it supports every current Industrial Ethernet protocol.

Among others, these advantages were realized by the JUMO Group. JUMO develops and manufactures products and system solutions for measurement, control, and analysis of physical and chemical quantities for a wide variety of industries, including food, air conditioning, mechanical engineering, chemical and pharmaceutical, packaging, and water and wastewater. Everywhere in these industries, a variety of process data must be communicated over large networks and the reason it is used in one of the latest JUMO designs, the DICON touch.

Transformation from a simple analog sensor to a smart sensor. A smart analog sensor includes the complete signal chain and the processing unit.

DICON touch technology offers a two-channel process and program controller that can be visualized via a TFT color graphics screen and can be operated intuitively by touch.

Besides providing the RS-422/RS-485 MODBUS RTU, Ethernet, and PROFIBUS DP interfaces that were previously available, DICON touch technology also makes it possible to connect and communicate with a PROFINET controller. This is enabled by its integrated fido5000 2-port switch, which allows simple network topologies to be established. The network application has integrated features that include evaluation of registration data, setup configuration, and web server functionality for online visualization, which are available along with the PROFINET real-time data exchange. Conformity to the PROFINET standard and compatibility with applications from various manufacturers are guaranteed through certification.

ADI and JUMO have a longstanding partnership. Through the acquisition of Innovasic in 2016, ADI was able to expand its Industrial Ethernet portfolio. This makes it possible for ADI to offer its customers access to a series of Industrial Ethernet applications—a fact that has already been demonstrated in the cooperation with JUMO and that has positively influenced the relationship between the two companies. With JUMO, ADI moved beyond being a supplier of individual components and into the role of being a true design partner.

With Analog Devices, we gained a competent partner that has supported us extremely professionally in developing the PROFINET interface for our multichannel process and program controller JUMO DICON touch,” said Klaus Otto, product manager at JUMO GmbH.

Specifically in the development of the DICON touch, ADI has a solution for the requirement of designing all devices based on the Ethernet protocol PROFINET. The challenge was to develop a device that was as universal as possible to offer customers a large number of possibilities.

The DICON touch was to be developed as a modular, powerful concept: with a simple plug-in card and an integrated PHY for standard Ethernet or, alternatively, with an extended plug-in card with PROFINET functionality. “In the development, we placed special focus on an individual PROFINET solution that was not yet available on the market with such a functional range,” said Otto. 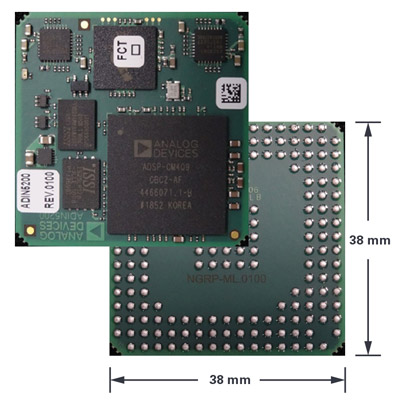 The fido5000-based RapID platform is available as an evaluation kit.

In addition to the fido5000 REM switch chip, the integrated RapID platform was used in the development of the DICON touch. It demonstrates a complete solution based on the fido5000 as an embedded design. It combines the fido5000 switch chip, a communication processor, JTAG interface, and PHYs, as well as different memories like Flash, SDRAM, and EEPROM, all on one board. The next generation of this RapID platform will include a more powerful and power-saving ARM Cortex-M4 processor as a communication processor, on which additional processes can be implemented depending on the requirements.

For the development of the DICON touch, the properties of the existing RapID platform, like the availability of common pre-certified Industrial Ethernet protocols, were very much in JUMO’s interests. The possibility of downloading all relevant information onto the RapID platform, including circuit diagrams and layout data, reduced system development time considerably. Another interesting feature of the RapID platform, which is also on the DICON touch, is the dynamic, integrated web server that can be used to read or change network parameters as well as input and output data in a very simple way. Also, it is possible to configure the PHY via RMII and I²C interfaces. In addition, the PROFINET module can be updated on startup because the firmware is mirrored on the DICON touch.

Thus, the RapID platform’s flexible configuration for the DICON touch also enables firmware updates and network access. There were also no limits placed on creativity in the development of the DICON touch. For example, the standard blinking LEDs, an important feature of PROFINET, were not implemented on the electronics. Instead, the complete LCD display of the DICON touch will blink.

Cybersecurity also played a key role in the development of the DICON touch. Cybersecurity for industrial controllers cannot be addressed with a one-size-fits-all solution. Instead, a far-reaching approach must be taken based on the risk assessment for the system.

As part of its security strategy, there is a concentrated effort to making Ethernet components as secure as possible. Current Industrial Ethernet and TSN solutions are thereby one focus of security developments. The fido5000-based RapID platform was supplemented with security features that offer key management, secure boot, secure updates, and secure memory access to protect against cyberattacks.

With the fido5000 family and the RapID platform, ADI offers its partners a solution for applications so that they will be able to meet future requirements such as real-time capability, reliability, security, etc. In this context, ADI offers its customers not just the pure product but also the possibility of cooperation or support for their development.

The advantages of such cooperation have been demonstrated by the example of the new JUMO DICON touch process controller. The project’s success yielded a secure, reliable, and forward-looking solution that was jointly developed within a manageable amount of time.