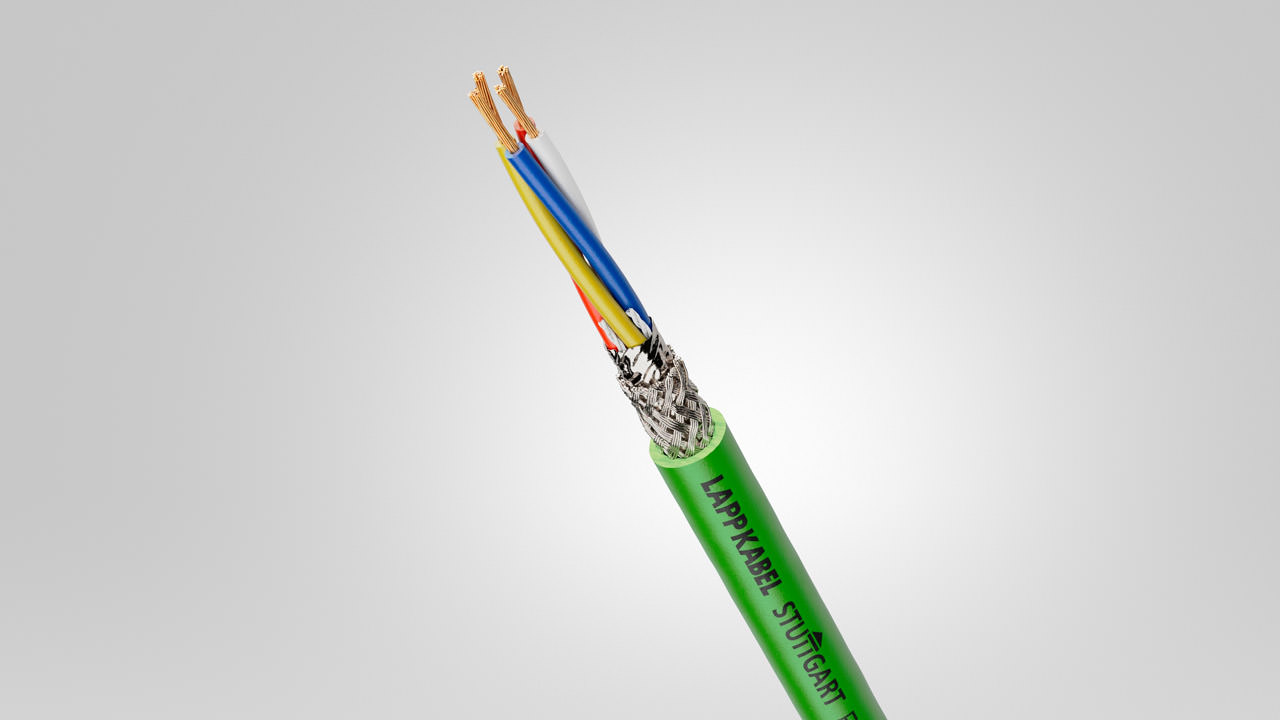 Robots are gaining ground in automated manufacturing processes and the number of industrial robots is constantly growing.

Today, robots are a fixed part of a modern factory’s symbol. For a long time, robots have been able to do more than just monotonous movements. Thanks to their connection to the data network, they also allow access that is necessary for monitoring processes or remote maintenance, for example.

Industrial protocols such as PROFIBUS and PROFINET are used to ensure seamless feedback loop data communication between the sensors on the robot arm, the robot system/control system and their connection to the control level. Flexible ETHERLINE® data cables provide the cabling that is necessary for network communication.

However, the robot arms’ rapid movement sequences in a three-dimensional space often cause a significant mechanical load for the cabling from when the robot is commissioned right up to the final completed cycle.

This puts Ethernet data cables to the test: they are some of the most technically sophisticated cables, with their twisted pairs of cores, double shielding and transmission parameters that are critical for successful data communication.

In many cases, robot application designers must choose between data cables that are designed for linear, horizontal travel paths – typically used in cable chains – and data cables that are designed for torsional movement sequences. The main reason is that the cable types have a different interior structure. Lay lengths within the core pairs must be strictly adhered to and matched to one another. Core pairs next to each other must not obstruct each other and interference signals must be prevented.

While relatively short lay lengths are preferred for cables for horizontal travel distances to achieve lower bending radii in the cable chain, long travel lengths are a priority for torsion cables. The problem is that, in their movement sequence, robot applications combine horizontal linear movements with torsional load. A large number of conventional Ethernet cables have not been able to properly cope with this combined challenge.

The challenge when creating a sophisticated cable design has been the lack of standardised industrial standards for robot-compliant Ethernet data cables. This resulted in a wide range of incompatible and proprietary understandings of what “robot suitability” means for Ethernet cables on the market. The PROFINET user organisation responded to this situation and worked closely with AIDA (the Automation Initiative for German Motorists) to come up with the necessary specifications.

After exchanging ideas with leading companies in the industrial cabling field, the stringent PROFINET type R data cable specifications were created. Well-known manufacturers were not the only ones involved in the process of developing the new guidelines: opinions and suggestions from users, for example from the automotive industry, were also taken into account.

The new “type R” describes two-pair Cat.5e industrial data cables, which must withstand numerous electrical and mechanical requirements and provide longevity when used in industrial robots. The latest version of the “Cabling and Interconnection Guideline”, Version 4.11 not only includes “type A” (fixed installation), “type B” (flexible installations) and “type C” (cable chain and special applications) but also includes “type R” for the first time.

But what makes a data cable a PROFINET-compliant type R robot cable? The mechanical requirements are at the top of the list. And there are not just a few: A type R-compliant cable must be able to endure all of these tests before it is ranked as a robot-compliant cable according to PROFINET: 5 million vertical torsion cycles at ±180° per metre, 5 million cycles in the horizontal cable chain at accelerations of up to 10 m/s² and speeds of 3 m/s over a travel distance of 5 m, an additional 1 million bends in the alternating bending test according to EN 50396 at a bending radius of just 7x outer diameter.

LAPP has developed the new ETHERLINE® ROBOT PN Cat.5e for this field. It is suitable for industrial data cabling within or on a robot and can be used in cable assemblies or laid freely. It offers a high load capacity, longevity and data communication reliability with data rates of up to 100 Mbit/s. Even challenging welding robot applications are no issue for LAPP’s all-rounder. The LAPP developers placed particular emphasis on choosing the right cable design.

Thanks to the filling elements and reliable materials, such as the robust PUR outer sheath, the ETHERLINE® ROBOT PN Cat.5e not only covers the mechanical load requirements, but also complies with important certifications and standards such as UL compliance as per AWM Recognized. This enables it to be exported to the North American market.

The new all-rounder has been put through its paces in the high-tech LAPP test centre, which has state-of-the-art test equipment and devices and has many years of experience handling data cables. For example, it continuously monitors the electrical transmission parameters according to IEC 61156-6 during the lengthy cable chain test procedure. Here, highly flexible ETHERLINE® data cables are tested fully automatically at defined intervals – usually every 20,000 to 50,000 cycles – and changes are identified in over 20 critical transmission parameters.

Particularly in the test phase of prototypes, this makes it possible to fully trace design weaknesses, which are eradicated and improved in the next stage of development. At the end of the test phase, the robot cable did not have any damage to the outer sheath and no adverse effects were documented in the transmission-critical electrical parameters.