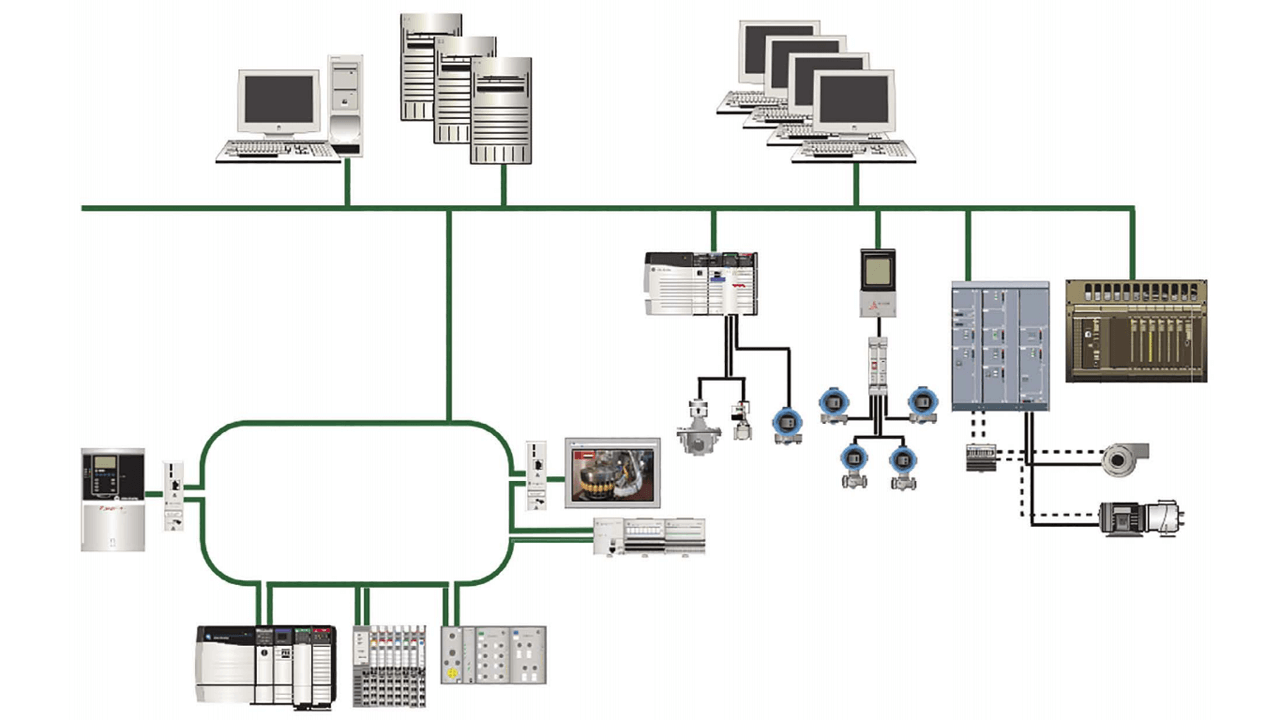 Many industrial manufacturers today have aging distributed control systems (DCS) in place. These legacy systems may work fine, yet as time goes on, there is increased potential for exposure to risks, which may prevent them from capitalizing on productivity benefits from state-of-the-art technologies. As a DCS reaches the end of its useful life, modernizing to a new automation system is essential.

Once the decision to modernize DCS systems has been made, there are four main strategic decisions that need to be considered:

If you or your operation are considering converting an existing DCS to a new automation system, learn how each of these decisions can impact your overall strategy, minimize cost and reduce potential risk.

One of the key decisions to make when modernizing a legacy DCS is determining whether it should be merely replicated or enhanced by implementing a more innovative, modern DCS system.

Replication is a replacement of existing automation hardware with new components, keeping all functionality identical to the greatest extent possible. The main benefit of replication is that the new automation system components will be supported by the supplier for decades — particularly important when the DCS is reaching the end of its useful life. Some improvement is typically realized, as the new controllers often have superior algorithms for loop control, and new hardware brings more memory and CPU power, so some consolidation is possible.

However, any existing HMI-related problems with poor process adjustments, alarm handling, and identification/resolution of issues will still exist. I/O may be replaced one for one, with no upgrade to distributed I/O via digital networks. Changes are only made to I/O to resolve any compatibility issues among I/O and field devices.

Conversely, innovation means improving the existing system to perform optimally with a new automation system. These improvements may lead to increased production and throughput, quality of product and increased safety performance.

New controller configuration and code can be developed to automate existing manual operations to improve and optimize process control. These changes result in better quality, less scrap, and more throughput. Substantial return-on-investment (ROI) can often be made by upgrading to smart and distributed I/O and high-speed digital networks, particularly as modern digital I/O networks accommodate both smart I/O and smart field instruments.

This first decision might be considered more philosophical, but it can be crucial to providing financial justification to move forward with modernization. With improvement, each upgrade area is examined strategically, with investments made where return is greatest. Replication is cheaper up front but becomes more expensive over the entire life cycle of the new automation system, as many of the benefits of a modern DCS are forfeited.

When developing a DCS modernization strategy, the user must determine if the conversion or upgrade will be done vertically or horizontally. A vertical upgrade means that one specific process area slice is converted at one time, including the human-machine interface (HMI), controllers and I/O. Conversely, a horizontal upgrade means all similar DCS equipment is replaced at one time across multiple (some or all) process units.

To give an example: A plant might have 10 boilers, with each one supplying process steam to a process area. In a horizontal upgrade, a portion of the automation system for all boilers (typically HMI first, controllers later) would be replaced over a single period before going down to the next layer.

Horizontal versus vertical upgrade decisions are often driven by specific plant process configurations. For example, if two boilers supplied steam to five process areas each, it would likely necessitate a horizontal upgrade approach.

Either vertical or horizontal upgrades can be executed with a phased migration approach, minimizing downtime and risk when managed properly. 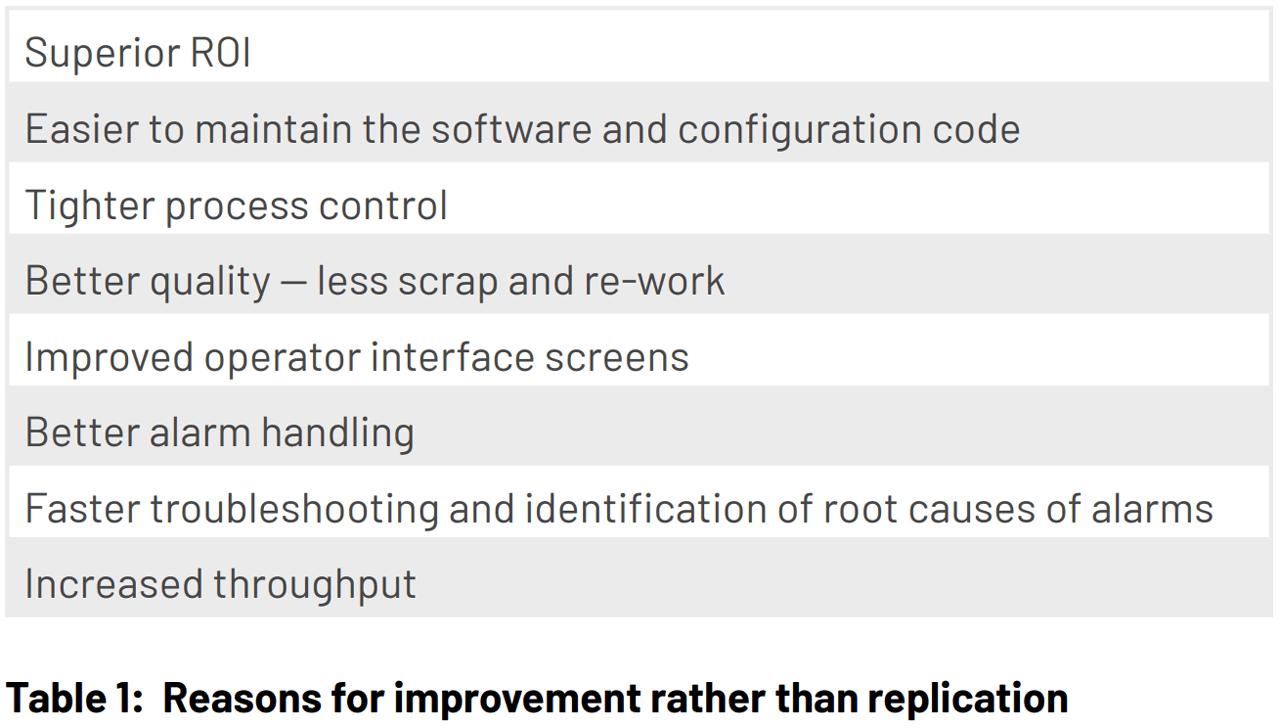 One conversion method is to replace the entire DCS at once, including the HMIs, controllers, and I/O. This method is simple to execute and often results in lowest overall purchase and installation costs, but downtime can be excessive, coming all in one continuous period. Breaking up the total required downtime into multiple periods is often advantageous, and this can be accomplished with a multi-phase conversion strategy. This strategy also spreads conversion costs out over a longer period and minimizes risk for each phase.

With a multi-phase conversion, the most obsolete components — generally the HMIs — might be converted first, usually requiring little or no downtime. In the next phase, controllers are replaced. This will usually necessitate some downtime, but it can be kept to a minimum by using the methods explained below. In a later phase, the I/O is replaced.

There are methods to minimize required downtime during this multi-phased approach.

HMI Phase: In this phase, old HMIs are replaced with modern PC-based HMI components. Once the new HMIs are configured, they can be tested using software that simulates connection to an actual automation system. Benefits and costs generally increase with the accuracy of the simulation.

Once the HMIs are configured and the simulation software is active, the HMIs can be installed in the process plant control room. Viewing these simulated HMI screens next to existing HMIs is a low-risk and low-cost method to train plant operators on the new HMIs. Once operators are comfortable with the new HMIs, the simulation software can be uninstalled from the HMI PCs, and the PCs can be connected to the existing controllers. This may require some downtime and configuration to integrate the new HMIs with the existing controllers.

Controller Phase: In this phase, legacy controllers are replaced with modern controllers featuring higher speeds, more memory and process optimization technologies such as multi-variable control, model-based control and other advanced process control methodologies. Depending on the vintage of the old DCS and other factors, new controller configuration may be generated from scratch or imported from existing DCS programs.

Technologies such as I/O scanners can also be deployed at this point to simulate connections between the new controllers and the legacy I/O.

For these reasons, it’s generally a good idea to invest in controller simulation to the greatest extent possible, as this will go a long way towards ensuring a smooth switchover from the old DCS to the new automation system.

I/O Phase: Once the new HMIs and the new controllers are in place, the final step in a multi-phased conversion strategy — I/O replacement — can take place.

In this step, software simulation is not required, but hardware simulation often is. Hardware simulation for I/O consists of connecting new I/O modules to field sensors, actuators and instruments of the same models as those found in the existing plant. This simulation is generally performed in a test area where it is feasible to stage and interconnect all the required components.

Once hardware testing is performed and comp0leted, the new I/O can be installed and connected. As with HMI/controller connections, the connection between the new I/O and the controllers is very straightforward, as both sets of components will typically be supplied by one vendor, or by two vendors adhering to a standard open communications protocol such as EtherNet/IP.

Connections among I/O points and existing field sensors, actuators and instruments are more complex, but many automation suppliers have wiring solutions that minimize downtime when replacing and connecting I/O.

With a phased approach, users have the flexibility to choose specific subsets of the legacy system to replace, and this often means replacing HMI, controllers and I/O separately. The phased approach takes longer to complete but requires less downtime and incurs less risk.

Hot cutover has advantages over cold cutover, but also some drawbacks. The chief advantages are decreased downtime and reduced risk. Because the old DCS is kept running while the new automation system is being cutover one control loop at a time, only one control loop at a time is down. In most plants, this can be managed with little or no downtime.

With hot cutover, risk is very low as control of each loop can be transferred back to the old DCS in the event of problems controlling the loop with the new automation system. Troubleshooting is very simple as any problems are isolated to one loop.

However, there are also corresponding drawbacks. A hot cutover is more expensive overall as some or all of both the legacy DCS and the new automation system have to be up and running simultaneously. More space is required in the control room and rack rooms, adding to the complexity of project management.

Most plants opt for hot cutover, unless there are special circumstances that would allow the entire plant to be shut down for an extended period. The hot cutover choice may seem more expensive in terms of pure upgrade costs, but when Total Cost of Operations (TCO) are considered — which includes the cost of lost production due to the extensive downtime and increased risk during startup — it is generally the best choice.

At every stage of implementation, there is simply no substitute for experience. But for many plants and organizations, there is simply insufficient in-house staff and expertise to manage large capital projects internally, particularly for specialized tasks performed infrequently, such as a DCS upgrade or conversion.
This tends to be the reason why many plants turn to outside service providers to manage these projects.

When selecting a service provider, the main criteria should be experience with the desired upgrade path, in terms of strategy and plant processes, and the new automation system hardware and software. Ideally, the service provider will have successfully executed multiple similar upgrades, with an opportunity for plant personnel to speak with past customers to verify service provider claims.

Make the right decisions for your DCS modernization

To summarize, four strategic decisions must be made before proceeding with a modernization plan:

Plants with an aging DCS will require an upgrade to a modern automation system at some point. Selecting the right upgrade strategies and the right project management team are critical to the success of the upgrade. If a third-party service provider is brought in, they can often assist in not only project management, but also in the development of the upgrade strategies.