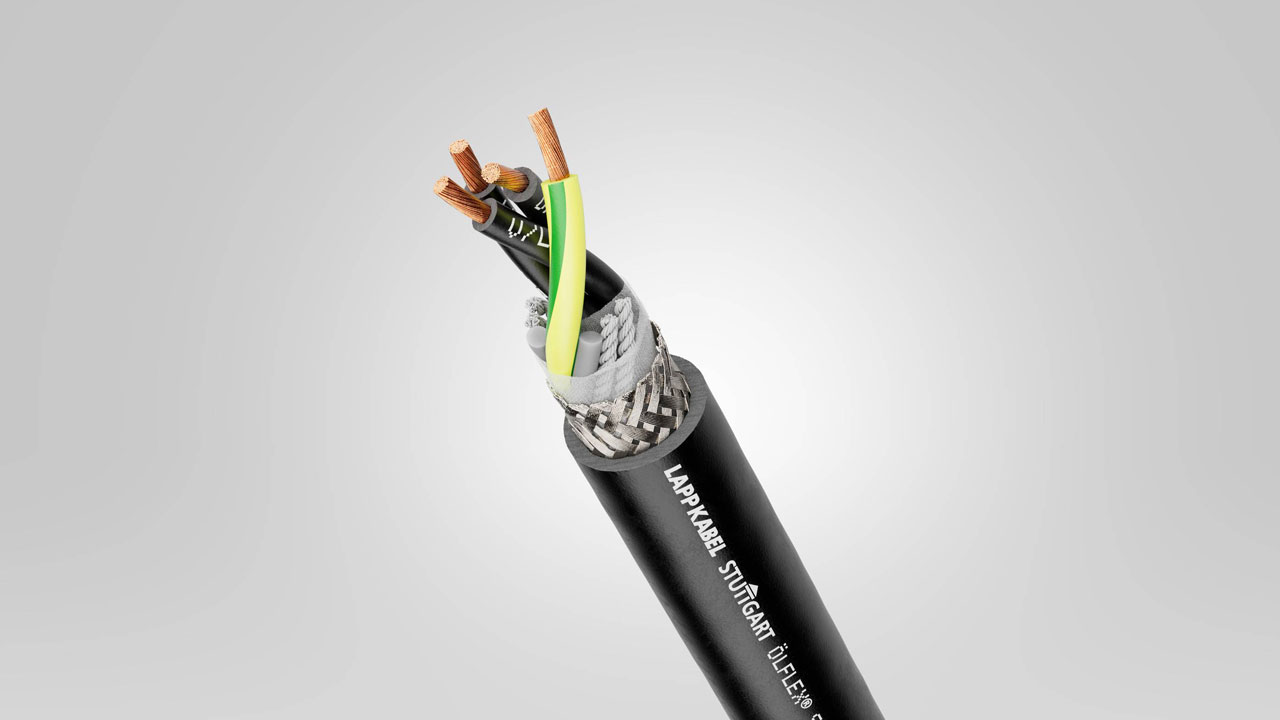 New technology does not eliminate the cause of EMC interference, but it does address significant points at which interference is introduced into a system. A new cable design enables equalization currents to be reduced by up to 80% at the frequency inverter output and on parallel paths such as data lines.

In the smart factory, machines and systems are increasingly networked. As a result, the topic of electromagnetic compatibility (EMC) is also becoming increasingly important. Especially in industrial plants where frequency converter-controlled motors are used, undesirable currents can increasingly occur on the equipotential bonding (PA) or protective earth (PE) cables. A new, innovative cable design from LAPP reliably reduces leakage currents and makes a decisive contribution to improved EMC in machines and systems.

Nowadays, electric motors in process automation are operated exclusively by means of frequency converters. In addition to the advantage of variable speed, this type of control offers considerable improvements in terms of energy and process efficiency. However, due to the principle of control, undesirable side effects occur and leakage currents are generated. The more components are involved, the greater the risk of such disturbances. At the same time, the installation spaces in machines and systems are becoming smaller and smaller. In order to avoid expensive production downtimes in the smart factory, it is therefore best to consider the topic of EMC during the planning phase.

LAPP has demonstrated how interference within connection solutions can be virtually eliminated as part of the “PEPA” research project of the German Federal Ministry of Economics and Climate Protection. In addition to LAPP, SEW-EURODRIVE, BLOCK, Danfoss, MAGNETEC and the Technical University of Darmstadt are involved in the project. Here, LAPP is leading work package 4: Couplings between neighboring cables as well as with plant components. Measurements and optimizations of the cable design. The aim of this work package is to promote cross-company research on a complex topic from the automation/drive world, in which the correct selection of connection components and their professional installation are particularly important.

The subject of the investigation was the question of why undesirable currents very often occur on the potential equalization lines (PA) or protective earth lines (PE) in industrial plants in which frequency converter-controlled motors are used. Due to the clocked control (pulse width modulation), interference currents in the range of about 3 kHz to 1 MHz are excited, which flow off via housing parts, PA/PE conductors/networks and, in the worst case, via the shielding of data lines in the direction of earth potential or to the source. High-frequency equalizing currents with an amplitude of 10 A or more are not uncommon. The consequences are inadmissibly high currents on the protective earth and thus supposedly faulty tripping of residual current circuit breakers (RCD) or impairment of data communication if, for example, the equalizing currents flow over the copper shield of a data line. These faults are difficult to find because they do not follow a systematic approach. LAPP has therefore set itself the goal of investigating the physical coupling mechanisms within motor connection cables and deriving a new type of cable design from this. The result of this development is zeroCM® technology. 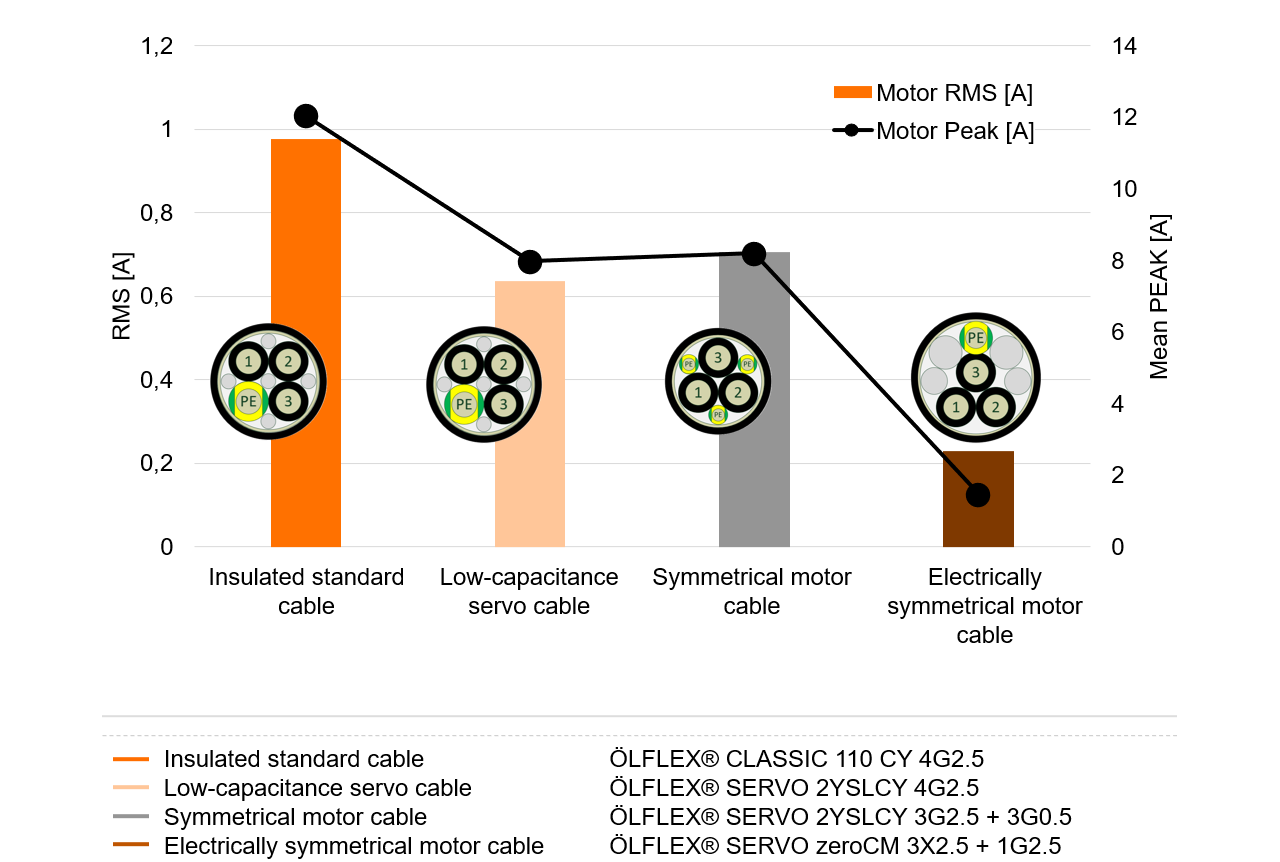 Leakage current (rms and maximum level) measured at the frequency inverter output for a 4 kW drive and 50 m cable length.

Cable technology put to the test

The origin of the innovation was to put the status quo in cable technology to the test: previous designs tended to be trimmed to small outer diameters and optical symmetry. Until then, the problem of EMC was always solved by shielding. LAPP took a different approach with zeroCM technology: the cable is visually asymmetrical, but 100% electromagnetic symmetry is achieved. Ultimately, this means that even less shielding is required.

The secret of zeroCM® technology is a special, innovative stranding technique. Three phase conductors are arranged symmetrically and stranded in an inner layer. In addition, at least one protective conductor is stranded in an outer layer with opposite stranding direction around the three phase conductors in a specific lay length ratio. The insulation of the conductors is capacitance-optimized and consists of polyethylene, polypropylene or a foamed variant. Between the inner layer and the outer layer there is a separating fleece. This design achieves perfect electrical symmetry, which reduces magnetic radiation and greatly reduces internal couplings. The first prototype cable with a new cable design is the ÖLFLEX® SERVO FD zeroCM. It is especially suitable for use in conjunction with frequency converters. 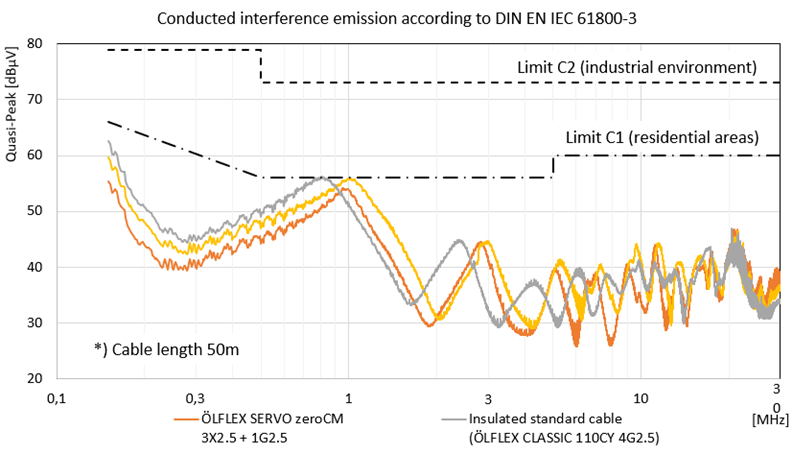 The measurement curve shows conducted interference emission of a frequency inverter according to DIN EN IEC 61800-3 and the improvement when a zeroCM® servo cable is used.

The effectiveness of the new ÖLFLEX® SERVO FD zeroCM cable was confirmed in test setups at the project partners as part of the PEPA research project. In addition to investigating an EMC-optimized installation of components, the role of the output line was evaluated, among other things. For comparison, an identical test setup with a drive system with potential equalization as well as parallel signal line (ProfiNet) were selected.

A shielded PVC-insulated standard cable, a low-capacitance servo cable, a symmetrical motor cable with three protective conductors and the new zeroCM® cable with optimized structure were compared. The results were clear. The best values in terms of leakage current at the converter output were achieved by the low-capacitance design of the zeroCM® cable. The generated leakage currents represent an additional load for the frequency inverter and all components involved and should therefore be kept as low as possible.

Furthermore, the interference current flowing via a parallel signal line was investigated: Here, too, the use of the zeroCM® cable favors the expression of the lowest possible interference currents. The investigations at the project partners also resulted in clear recommendations for the EMC-optimal installation of frequency converters, such as a low-impedance, RF-compatible and continuous equipotential bonding between the frequency converter and the drive.

In summary, zeroCM® technology does not eliminate the cause of EMC interference, but it does address precisely one of the significant points at which interference is introduced into the system environment. On the one hand, the new cable design enables equalization currents to be reduced by up to 80% at the frequency inverter output and on parallel paths such as data lines. On the other hand, reduced cable-charging currents ensure reduced load on and in the inverter itself. For example, longer cable lengths can be laid without operating the frequency inverter outside its (EMC) specifications. In addition, zeroCM® technology prevents the occurrence of voltage levels on the ground/earth potential (ground voltage) on the consumer side. This is particularly important when, for example, sensitive sensor technology such as analog encoders are used.

Although the new cable may seem unfamiliar when it is first assembled, the cabling remains as simple as usual, or the effort is even reduced compared to the ground-symmetrical cables with a third of the protective conductor. LAPP’s goal is now to equip a portfolio with zeroCM® technology; hybrid lines are next.