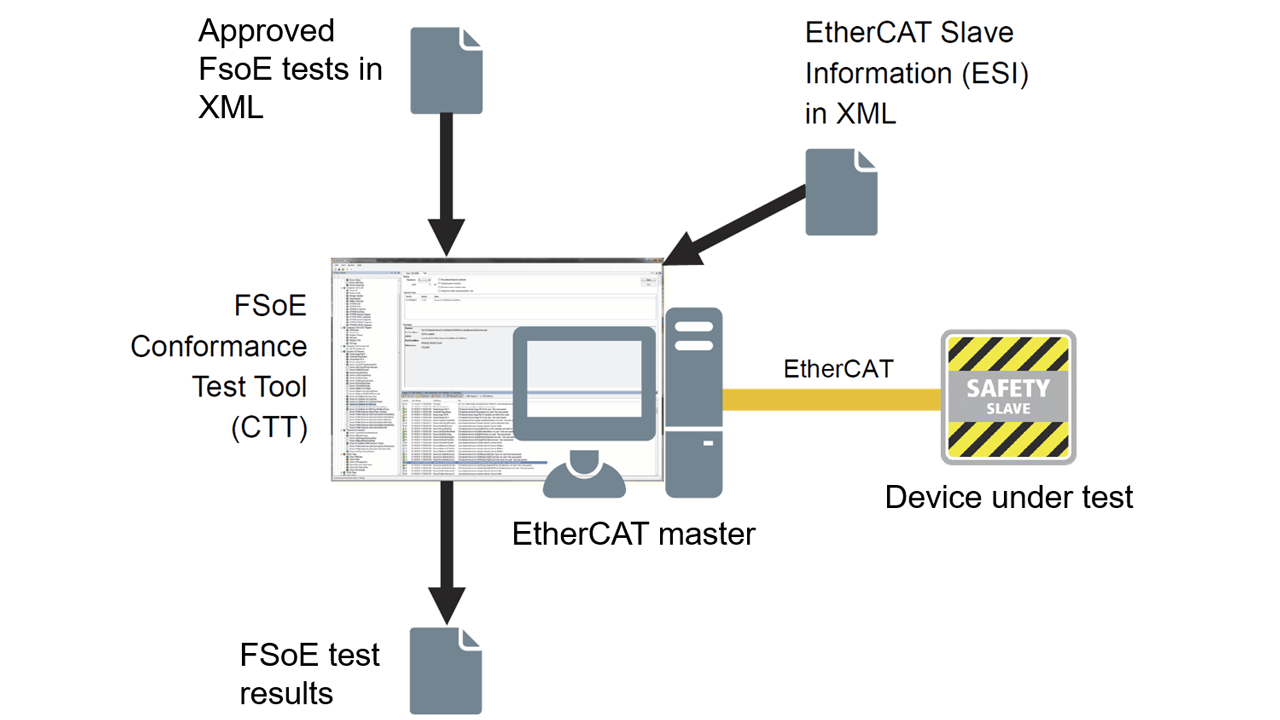 To formally confirm a high level of safety, the manufacturers of EtherCAT devices must meet requirements during development, testing and implementation to ensure the safe operation of products. A wide range of support services are available including tools, tests, documents and consultation.

In applications where life and limb are at stake, or where valuable machines and manufactured goods require protection, safety devices ensure the necessary safety measures in the field. In the event of a fault, they trigger mechanisms at lightning speed, which for example force an emergency stop of a machine to reliably ensure the safety of the application and above all of the operator.

To formally confirm this high level of safety, the manufacturers of such devices are subject to official requirements during development, testing and implementation to ensure the safe operation of products.

The EtherCAT Technology Group (ETG) therefore offers manufacturers of Safety over EtherCAT (FSoE) devices an ecosystem with a wide range of technical and engineering support services such as tools, tests, documents and consultation. The central component of these support services is the official FSoE Conformance Test, which is mandatory for manufacturers. 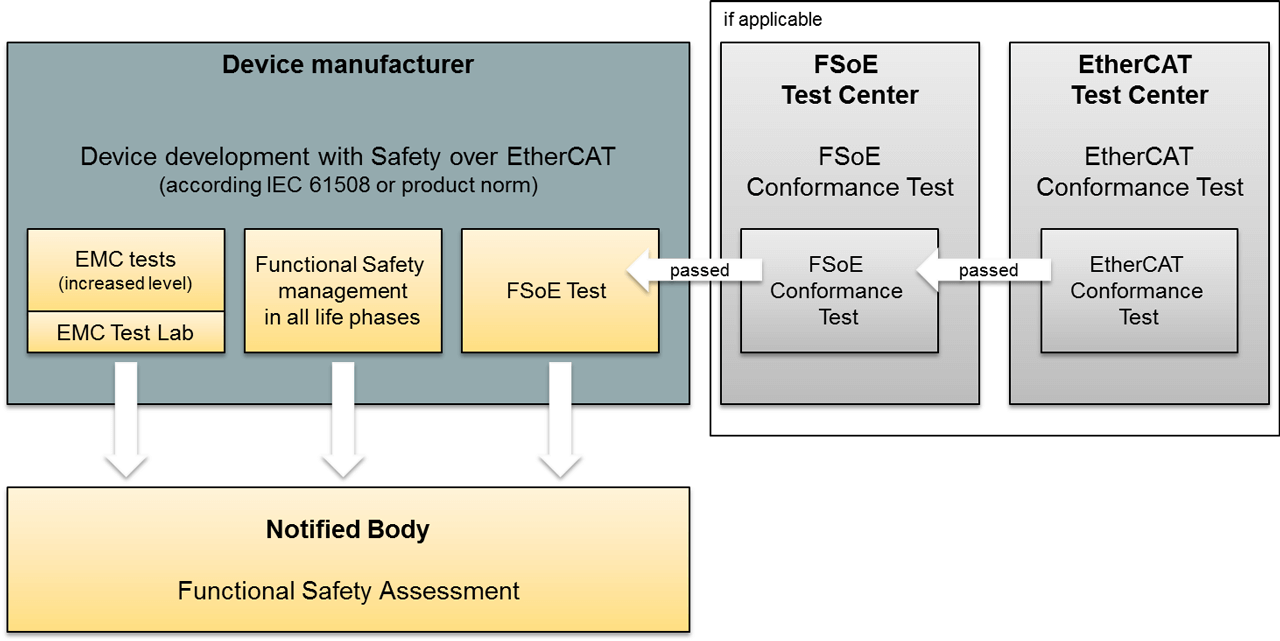 Acceptance process for Safety over EtherCAT (FSoE): Development of functional safety devices requires a rigorous formal process to verify the performance of high quality safety hardware and software. Proof must also be provided for the reliable and standard-compliant implementation of the Safety over EtherCAT protocol. The goal is to ncreases the reliability, freedom from errors and interoperability of secure communication and ultimately customer satisfaction.

The development of functional safety devices is associated with a rigorous formal effort, which on the one hand results in high quality hardware and software, and on the other hand also ensures verifiability.

Finally, before the market launch of a new product, a recognized test center must prove that the entire implementation meets the requirements of the desired Safety Integrity Level (SIL).

In addition to the actual safety-relevant function of the application (e.g. safe emergency stop or safely limited speed for a drive), proof must also be provided for the reliable and standard-compliant implementation of the Safety over EtherCAT protocol. One of the means of choice for this is the so-called FSoE Conformance Test, which is carried out by an officially recognized FSoE test service provider in the EtherCAT Test Center.

According to the FSoE Policy, each manufacturer is obliged to perform this test, which in itself already constitutes a subset of the formally required proof overall.
And even if the official FSoE Conformance Test only represents a relatively small part of the obligation to prove the safety of a device, it nevertheless provides great added value for the manufacturer – especially in connection with the other test options offered by ETG.

The prerequisite for the FSoE Conformance Test is the EtherCAT Conformance Test, which checks whether the basic EtherCAT implementation works reliably. If this is not the case, and if errors already occur in the underlying communication, the safety function is constantly triggered in a machine, which makes it a supposedly safe machine, but drastically reduces its availability and throughput. If the device passes the test for the EtherCAT protocol, the FSoE conformance test checks the implementation and integration of the FSoE protocol.

In Germany, the FSoE Conformance Test is carried out by TÜV Süd Rail, which is recognized as one of the world’s leading institutions in industrial device testing and verification.
The test is therefore usually also internationally recognized by other test facilities commissioned by the manufacturer for the overall verification, such as TÜV Nord or TÜV Rheinland. In addition, the FSoE Conformance Test itself is based on a world of specifications that have already been confirmed by TÜV Süd: The FSoE specification ETG.5100 was officially certified in 2005 and has been part of the international standard IEC 61784-3 FSCP 12 (Functional Safety Communication Profile) since 2010.

The ETG.7100 test definition in the form of a test table has also been approved by TÜV and completely covers the tests for FSoE slave devices as well as masters, enabling every device manufacturer to implement it in their own test environment.

Through the integration of these tests into the EtherCAT Conformance Test Tool (CTT), the tests can also be automated and performed in a repeatable manner. This is also done during the official FSoE Conformance Test and serves device manufacturers during the development and integration of the FSoE stack into their devices and, of course, in preparation for acceptance in the EtherCAT Test Center.

In addition to the FSoE Conformance Test as a central element, the EtherCAT Technology Group offers manufacturers further assistance in the planning, development and testing of FSoE devices.

An important document is the Safety over EtherCAT Implementation Guide, which provides relevant information for implementation best practices. It contains all references to specifications and documents as well as the available facilities for training, support, development products and services and testing. In addition, developers have the opportunity to participate in EtherCAT Plug Fests, which are considered a pragmatic approach to test the functionality and interoperability of their own devices and stacks with those of other manufacturers.

In addition to the general EtherCAT Plug Fests, where tests specific to both EtherCAT and FSoE protocol can be performed and questions can be answered, there is a special Plug Fest once a year where only FSoE device manufacturers come together. Here the interoperability of FSoE slaves, masters and configuration tools is tested. The Plug Fests are a good opportunity for manufacturers to validate their own implementation in the prototype stage and are useful as part of the preparation for the official EtherCAT and FSoE Conformance Test.

As with the EtherCAT base protocol, the EtherCAT Technology Group offers a comprehensive ecosystem around FSoE implementation, testing and release. The organization’s goal is to support manufacturers of FSoE devices in realizing their implementation as quickly and successfully as possible and to go through the official acceptance process as smoothly as possible.

The FSoE conformance test is carried out by TÜV Süd Rail at the ETG-accredited EtherCAT Test Center in Nuremberg, Germany. In a so-called one-stop-shop procedure, the device manufacturer can have the EtherCAT Conformance Test, which is mandatory as a basis for general EtherCAT implementation, carried out in one day. If this test is passed, the FSoE Conformance Test is usually performed on the following day.