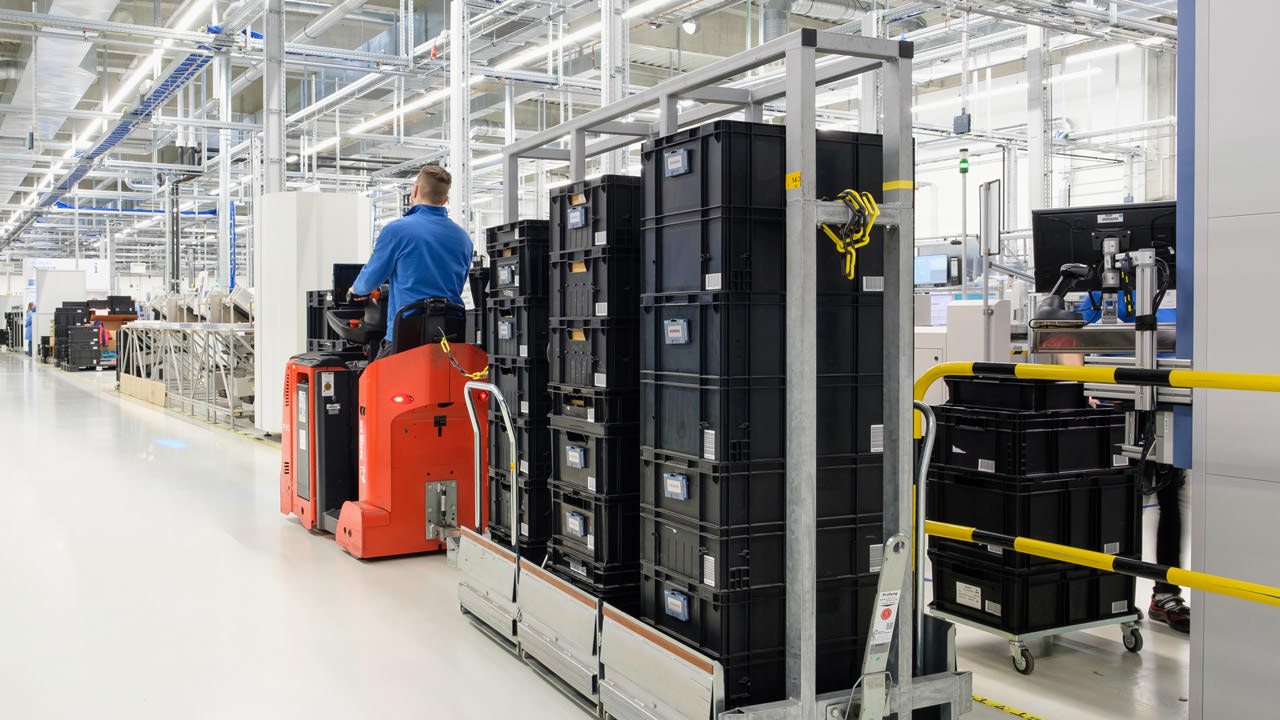 To make the same part as often as possible – this old mantra of production planning has been outdated for a long time. Modern technologies to digitally connect IT systems and real processes in the factory aid in increasing productivity and flexibility in equal measure. An example is the use of real-time locating in electronics manufacturing.

It is an unspectacular object that symbolizes the transition to Industrie 4.0 at the Siemens Electronics Factory in Fürth: black material boxes. Thousands of them are used in the factory for almost all material transport duties. In these boxes, components are brought from the warehouse to the assembly stations and finished goods are transported to the shipping department. The inter-factory transports between Siemens locations also relies on them. Over 2,000 boxes circulate within the factory alone. 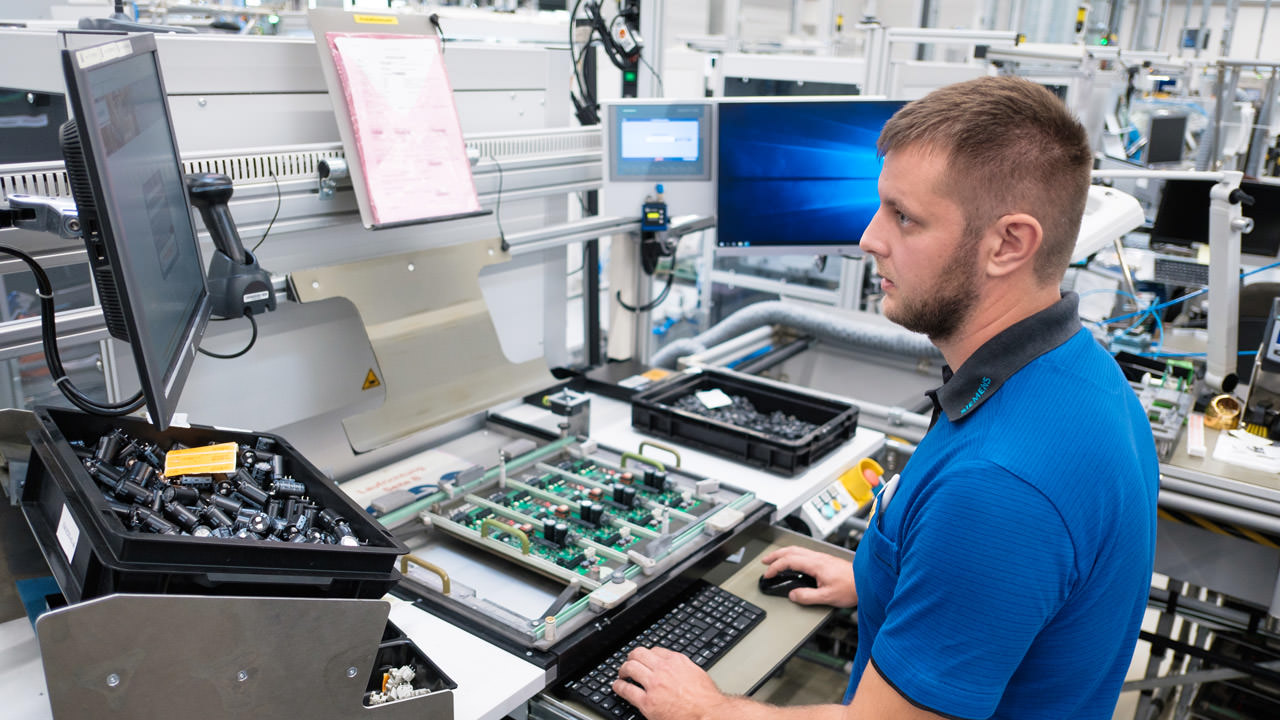 Fürth occupies a special position in the group of factories run by Siemens Digital Industries; factory manager Lorenz Rappl describes the output as a low volume / high mix production. Meaning low quantities per type, but with a high product variety – ranging from high-quality electronic components for industrial use to complex systems with a high degree of engineering. This shifts some aspects compared to mass production. In particular, secondary processes such as material transport or setup times play a much greater role than if the same product would come of the line day after day. Significantly higher flexibility at comparable costs – that is the formula focused on by the factory. Ultimately, it is about the reversal of the former Industrie 3.0 paradigm, which sought economies of scale through a high output quantity. The motto was to manufacture the same part as often as possible, thereby reducing unit costs.

However, the demands from the markets have changed considerably. The increasing product variety is the result of more and more specific customer requirements. Whereas in the past, a “one for all” product was accepted within certain limits, tailored solutions are needed today, which are also optimized in terms of price for the respective industry or application. Classic mass production cannot answer these requirements. 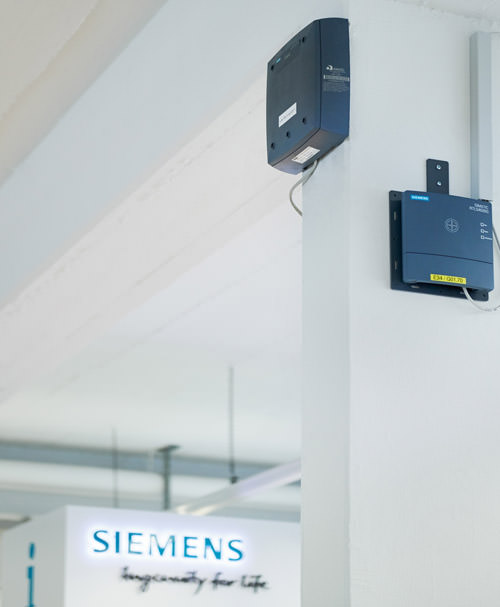 Black boxes instead of interlinked conveyor technology, highly qualified professionals instead of inflexible automation, dynamic self-organizing structures instead of pre-planned cycles: all these are characteristics of a modern Industrie 4.0 production like the one in Fürth. At the various assembly stations, a multitude of products can be manufactured. The material flow takes place dynamically with materials getting to the distribution station by tugger train and from there by trolley to the workspace – if need be, all over the hall. In the future, automated guided vehicles (AGVs) will take over this task autonomously. And a full automation can only be found in individual, specific work steps – for example, in the SMD placement of printed circuit boards.

A typical production order begins in the central materials warehouse. There, the components for a production batch are picked and placed in the boxes, which are handed as a stack to the internal shipping. A tugger train transports these stacks of boxes to distribution stations in the factory. The technician of an assembly cell receives the production order on their digital shop floor report and retrieves the stacks of boxes for their workspace. After the order has been completed, the finished goods are picked up again by the tugger train and brought to the shipping department. 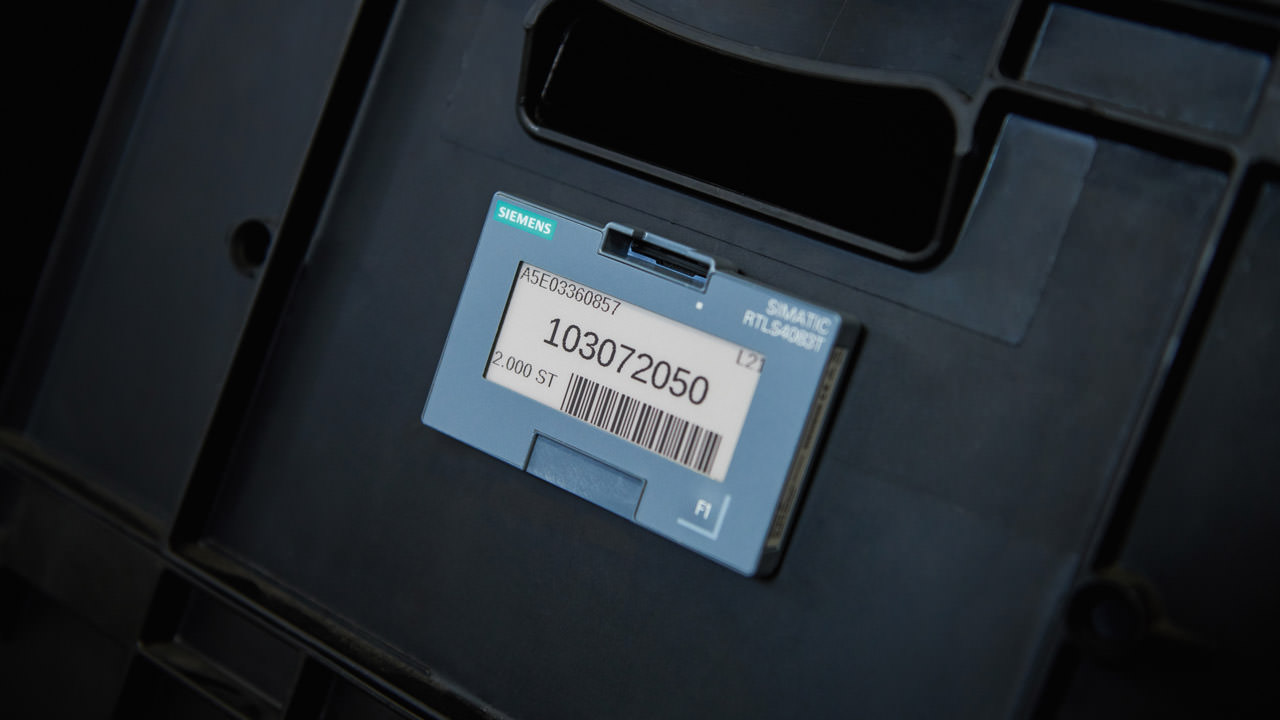 In the future, each material box will be equipped with a SIMATIC RTLS transponder. The display enables a dynamic dialogue between IT systems and employees.

Which box belongs to which order?

But, as is often the case, solving a problem leads to another challenge. Handling the black boxes turned out to be difficult and/or prone to errors in practice. For instance, employees have to identify the correct stack of boxes on the basis of the accompanying documents – as the boxes can hardly be distinguished “at a glance.” An order can also consist of two stacks, which the employee possibly might overlook. The consequence: a repeated journey to the distribution station, which costs valuable minutes. Add to this that the Fürth factory planners are not even that sure whether the set routes are optimal.

A new technology that Siemens has had in its portfolio since 2018 now helps here: a real-time locating system (RTLS) operating wirelessly. SIMATIC RTLS consists of three system components. Transponders such as the SIMATIC RTLS4030T are attached to the moving objects – such as means of production, goods, transport systems, or the actual products –  which are used for position detection and possess a unique identification number. Via a wireless network of RTLS gateways, these transponders are recorded at short intervals and the position determined in the form of two- or three-dimensional coordinates. With SIMATIC RTLS, the omnidirectional characteristic of the integrated antenna requires the gateways to be installed clear of obstructions as much as possible to guarantee an optimal coverage.

The gateways are linked to each other via a separate Industrial Ethernet network, so that the production network, communication network (e.g., email), and RTLS network are completely separate. The gateways are supplied with energy via Power over Ethernet (PoE), so that a single line per gateway suffices. Industrial SCALANCE XM400 switches then forward the data to the locating manager. 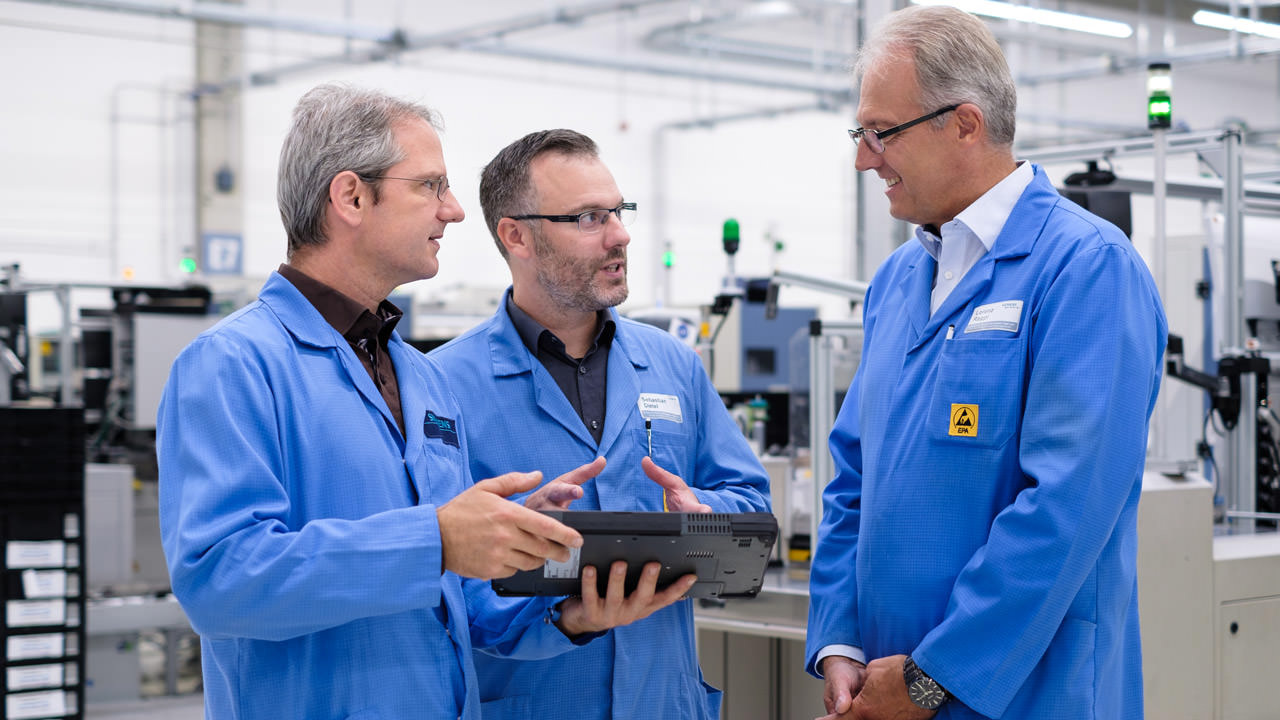 In fact, RTLS has been available on the market for many years, but the previous systems were often difficult to install, limited in accuracy, or expensive. The new ultra-wideband (UWB) technology used by SIMATIC RTLS overcomes these limitations: Now a positioning accuracy in the centimeter range and the detection of thousands of transponders in a complex manufacturing environment, e.g., a complete hall, are possible. The lifespan of the transponder batteries has also been extended to ensure operability for years. UWB-RTLS therefore strikes the right balance between freedom from maintenance, precision, and costs to meet the demands of a digital infrastructure.

A sophisticated software, the locating manager, assumes the information from the gateways, calculates the coordinates, and transmits them to the actual target systems – depending on the type of the located object and the actual position. However, in order to obtain actual, production-relevant information from the coordinates, a further software component is necessary. “Location Intelligence” is the name of a new Siemens offering that connects the locating data from SIMATIC RTLS with the business processes in the production, e.g., the material and order data. The component thus forms the link between the digital twin and the real processes in the factory. 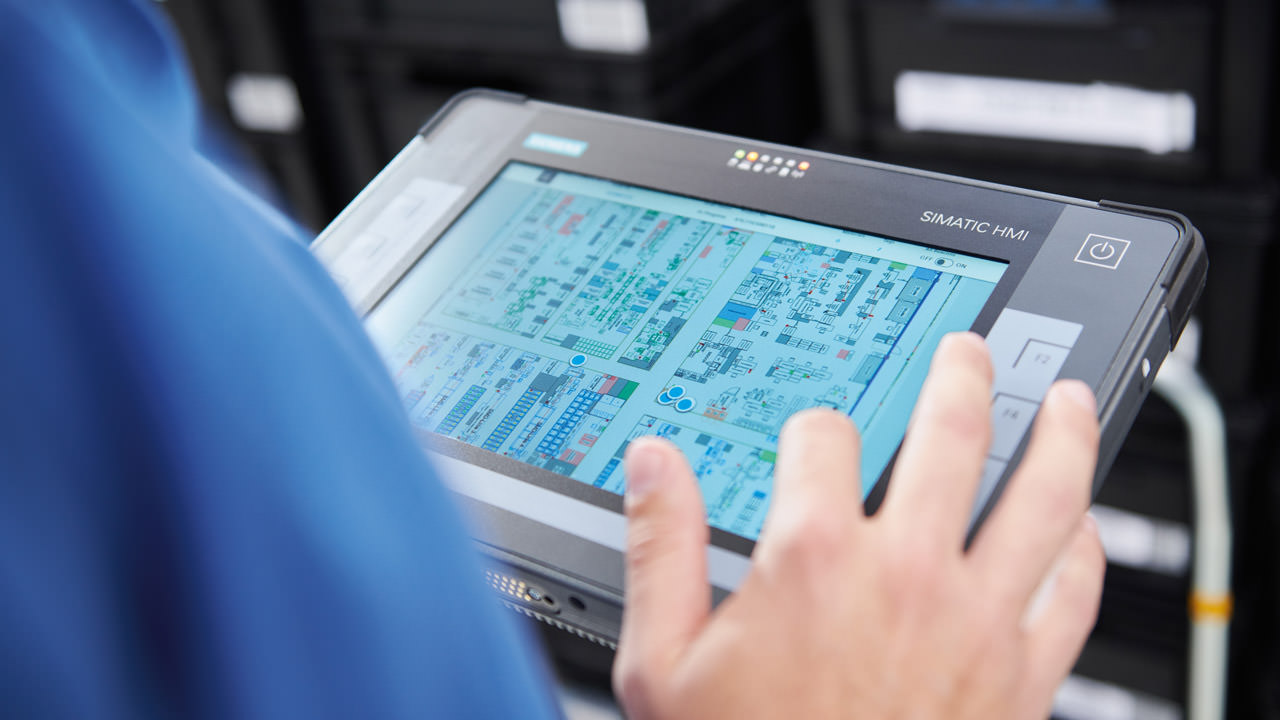 Location Intelligence forms real information from the coordinates for the production specialists, if needed also on mobile devices such as the SIMATIC ITP1000.

Real-time information is worth its weight in gold

For the Fürth factory, precise location information in real time is worth its weight in gold, because employees can now be guided to the material stacks in a targeted manner, and exactly when the boxes arrive. Mistakes are a thing of the past. Particularly practical is that Location Intelligence also supports mobile devices such as the SIMATIC ITP1000 – a tablet computer for industrial users. Static processes were once and for all replaced by dynamic and mobile structures.

Another special feature of SIMATIC RTLS proved to be particularly helpful in Fürth. The transponder used (RTLS4083T) cannot only be located, but also features an LED, buttons, and a so-called paper ink display, which is especially energy-efficient. Via this transponder, an interactive communication between the system and the employees can now take place: The employees are guided to the box searched for via the flashing LED, receive information on content and status of the box via the display, and in the future can also confirm orders via the buttons. The RTLS thus not only helps to eliminate unnecessary search times, but also makes printed accompanying documents unnecessary. In addition, the automatic triggering of certain process steps by reaching a defined position (geo-fencing) will replace manual activities. 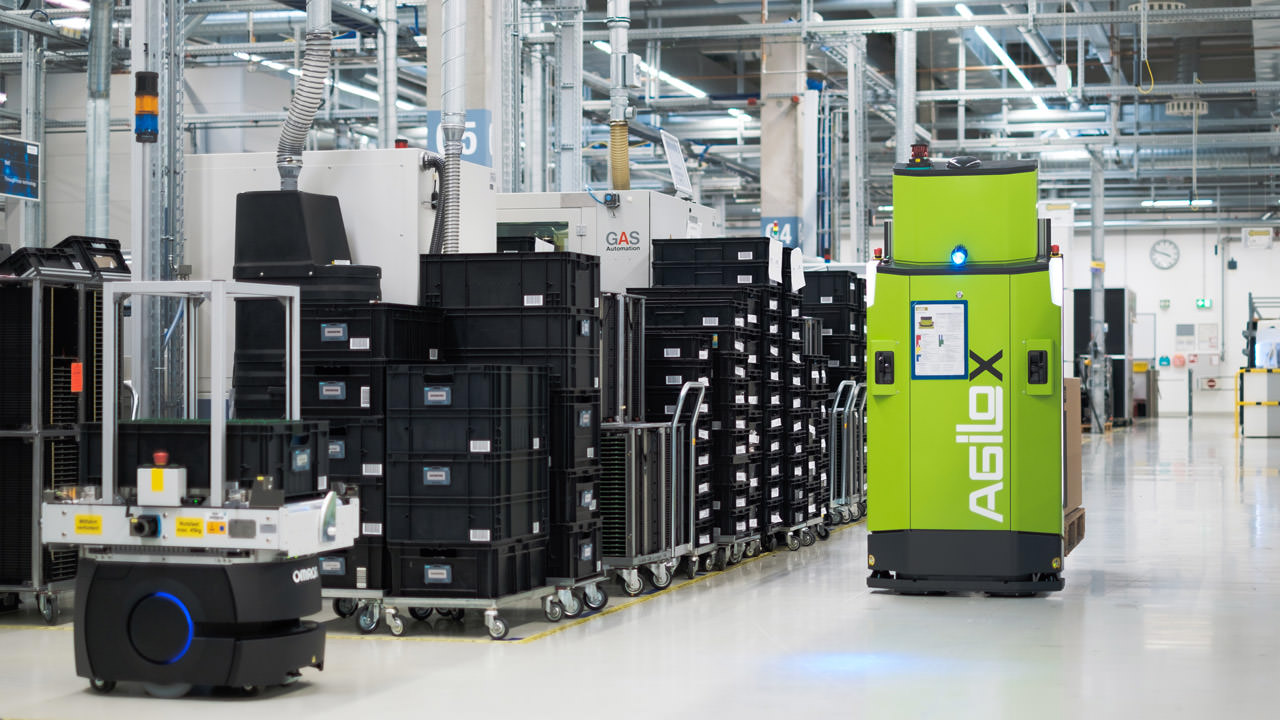 RTLS helps automated guided vehicles (AGVs) to stay out of each other’s way.

Return on investment in less than two years

This application – the locating of boxes by employees – already brings such high savings that the return on investment (ROI) will be achieved in less than two years. There are other application ideas, though, that can be implemented with SIMATIC RTLS. Because like a wireless LAN, RTLS is an infrastructure that can be used for a multitude of use cases. In Fürth specifically, two other scenarios are being analyzed.

One application deals with the route planning in the factory. On the one hand, the processes are fixed, but on the other hand, deviations prove extremely useful in practice. In order to include this knowledge into the factory planning, the actual routes as well as the dwell time of the boxes at individual stations are to be analyzed. The knowledge gained is then incorporated into the ongoing optimization of the production processes.

The second application relates to the AGVs. Each of these vehicles is equipped with extensive sensors to avoid collisions. Should the paths of two AGVs cross, both will stop at first and then try to slowly drive past each other. It would be better if the vehicles were controlled by a control center that would stop a crossing AGV until the main path is clear or would specify an alternative route. To do so, the control center must know the routes of all AGVs and constantly synchronize them with their current position – a task perfectly solved by RTLS. 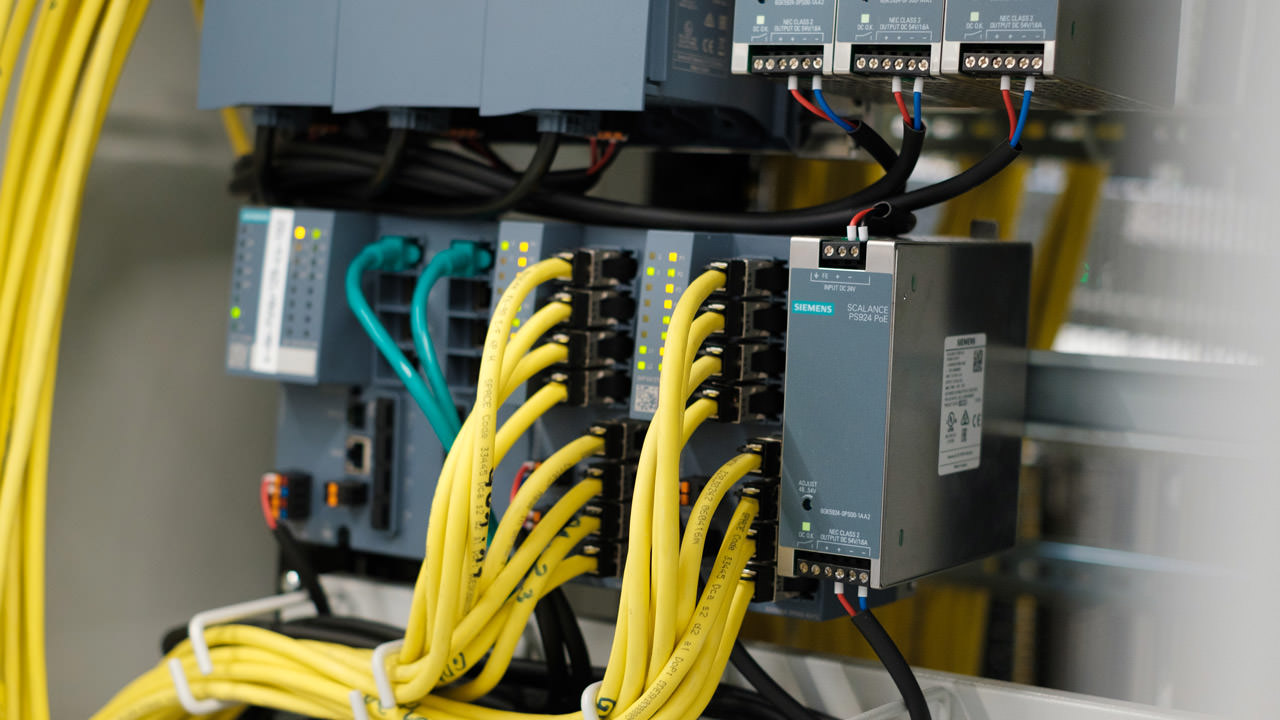 The RTLS gateways are connected to the servers via a separate network using SCALANCE X PoE switches.

The acceptance among the employees is high, reports Sebastian Dietel, RTLS project manager at the Fürth factory. On the one hand, SIMATIC RTLS and Location Intelligence have become an important tool to avoid unproductive work steps. The assembly staff can now focus on their actual tasks without having to repeatedly search for material boxes. On the other hand, the functions and the visualization were not purchased ready-made, but instead specifically adapted to the requirements in Fürth. The employees on site also have the opportunity to provide feedback and make suggestions for further development. Thanks to the agile approach in the project team, these ideas are then implemented step by step. Factory manager Lorenz Rappl also confirms the benefit of the system: “With SIMATIC RTLS, we can take our digital transformation to a new level. Because a digital twin is only worth something if it corresponds 100% with the actual processes.” Then there are new opportunities for analyzing and optimizing operations. “The real-time locating by SIMATIC RTLS thus represents a key to higher productivity and flexibility,” states Rappl.