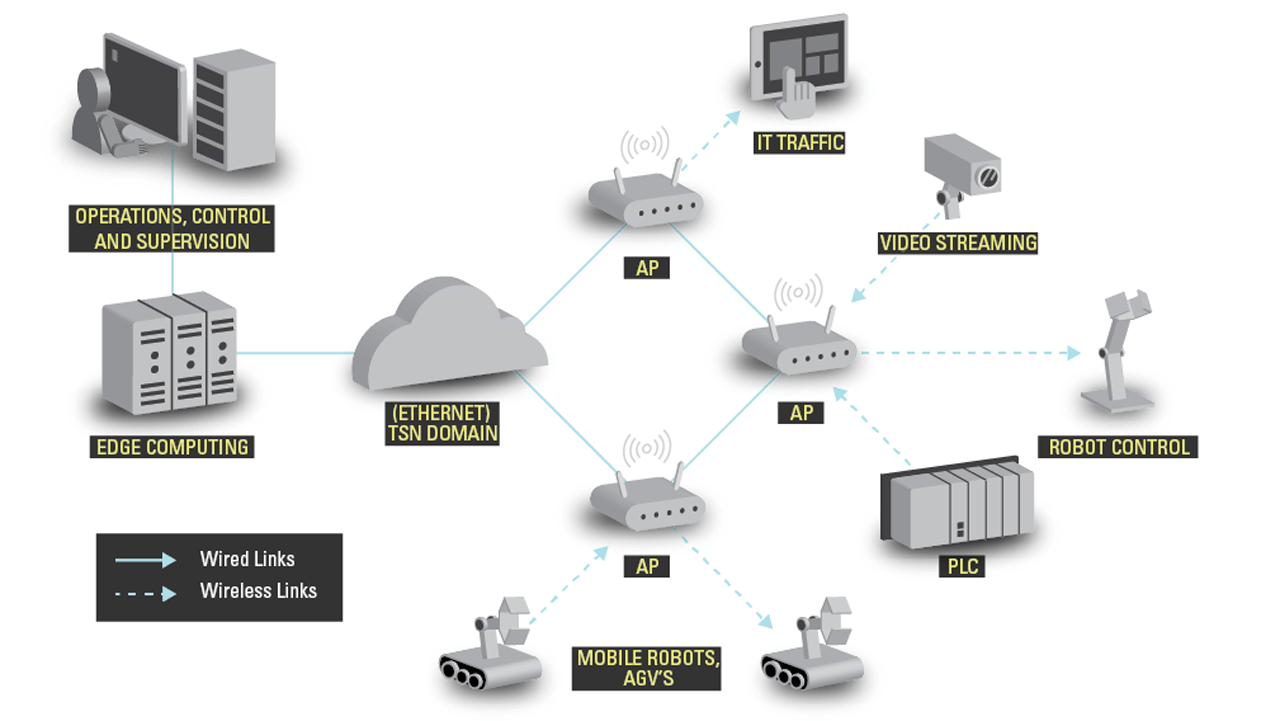 Most Time Sensitive Networking (TSN) standards developed so far are solutions based on Ethernet technology. However, given the nature of wireless communications, enabling TSN capabilities that maintain interoperability and compatibility with existing wired TSN standards is challenging.

Wireless communication systems are beneficial for many obvious reasons, including enabling flexibility and reducing wiring costs as well as enabling mobility. However, given the stochastic nature of wireless communications, enabling wireless TSN capabilities that are interoperable and compatible with existing wired TSN standards is challenging.

Although a few IEEE 802.1 standards exist for wireless, most implementations, market-specific profiling, interoperability testing and certification efforts have focused on Ethernet as the main transport media. As TSN-enabled devices and networks start to be deployed, enabling extensions of similar capabilities over wireless is a natural next step.

Wireless TSN – what it means 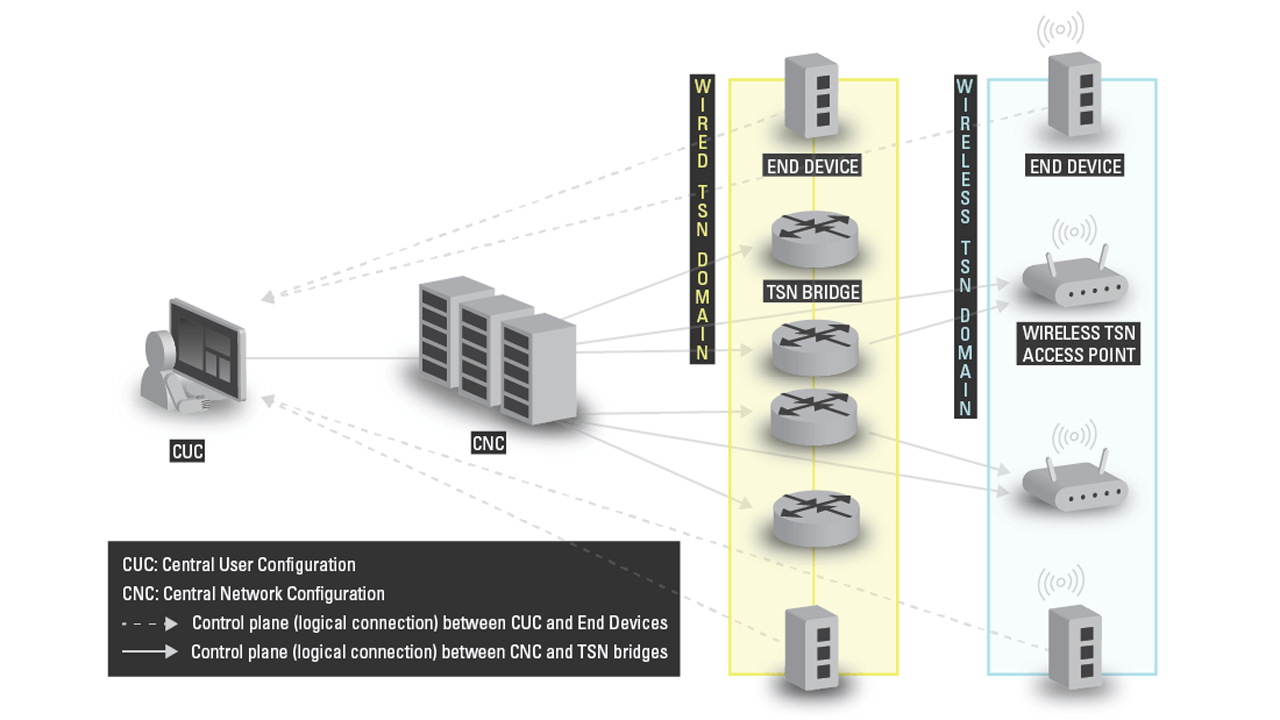 It is envisioned that TSN-enabled networks will extend from wired (Ethernet) to wireless domains. The term “Wireless TSN”, then, is used to refer to a wireless network that extends IEEE 802.1 TSN capabilities over wireless media.

The graphic above illustrates the concept of a Wireless TSN domain extending a wired TSN-enabled network; The Wireless TSN links can enable wireless access to end devices and connect wired TSN networks, as illustrated in the graphic. The architecture in this graphic is an example of a centralized TSN-enabled network deployment for industrial systems.
Not every wireless technology is capable of supporting time sensitive networking features. Therefore, given the recent advances and features available in IEEE 802.11/Wi-Fi and 5G standards, only these two technologies are considered as candidates to enable TSN-grade performance.

In order to leverage the IEEE 802.1 TSN standards and ecosystem developed around them, it is important to enable seamless operation and interoperability from wired to wireless TSN domains. Some of the challenges associated with mapping TSN capabilities to wireless include fundamental differences between wireless and wired communications, the variable capacity of wireless links and the Packet Error Rate (PER) being typically higher in wireless.

The broadcast nature of the wireless medium is another important aspect to be considered. On one hand, it may open up the possibility to reach more devices with a single transmission. On the other hand, it is more susceptible to interference. Therefore, coordinated medium access is very important as well as resilience to interference.

The industrial market has the most diverse set of use cases and requirements for wireless TSN and has received significant interest. It has motivated the development of the 5G Ultra-Reliable Low Latency Communications (URLLC) mode, with several industrial use cases having already been captured in detail by 3GPP, 5G ACIA, and IEEE 802.11 standard groups.

Closed loop control is one of the most widely applicable use cases given its generic control loop model (input + compute + actuation), but specific latency and reliability requirements varies significantly depending on the application.

Mobile robots are also an important use case as wireless is fundamental for mobility, flexibility and reconfigurability of tasks and routes. Mobile robots’ latency and reliability requirements are compatible with capabilities of the latest wireless technologies.

Use cases related to control of Power Grid components have also been described in the IETF DetNet group. One unique aspect to be considered in some electrical power grid systems is the required coverage area, which may vary from local (e.g. substation) to wide areas (distribution and transmission). Industrial control systems require the highest level of determinism and reliability and rely exclusively on IEEE 802.1Qbv for scheduling.

Other use cases that require TSN-enabled networks, such as automotive and transportation applications, may also benefit from wireless. For instance, the wiring harness within vehicles, airplanes, and trains add significant production costs. If wireless technologies can provide the required time-sensitive media performance, it would bring value to such systems.

However, due to stringent latency, safety requirements and regulations, use cases that have safety critical requirements are beyond the scope of this document and the current wireless standards in 802.11 and 5G. Use cases that require under 100 microsecond level cycle times are also considered out of scope for wireless. Such use cases may be considered in the future as wireless technologies evolve.

What’s next for Wireless TSN

Given the benefits and advances in wireless connectivity technologies, it is a natural step to consider the extension of TSN capabilities to wireless media.

It is envisioned that the transition to wireless will be gradual. Initially, a wired TSN-enabled network will be extended to the wireless domain in order to support the use-cases where wireless provides clear benefits.

Existing wireless capabilities can support proof of concepts in the area of time synchronization and time-aware scheduling over wired and wireless domains and further work to define wireless specific test procedures is recommended. Configuration and management of wireless TSN capabilities is another area that can be further developed within the scope of Avnu. Areas for further work from a wireless standards standpoint have also been identified, which can be useful for groups like IEEE 802.11 and 3GPP.

Although most of the TSN standards and solutions developed so far are based on Ethernet, some of the fundamental TSN capabilities, such as 802.1AS-based time distribution, have already been extended to operate over 802.11 and integration with 5G standards is also being developed.

These existing standards and potential standards gaps are areas that to be addressed before widespread Wireless TSN implementation, along with the work needed to integrate wireless and wired TSN standards in the future.