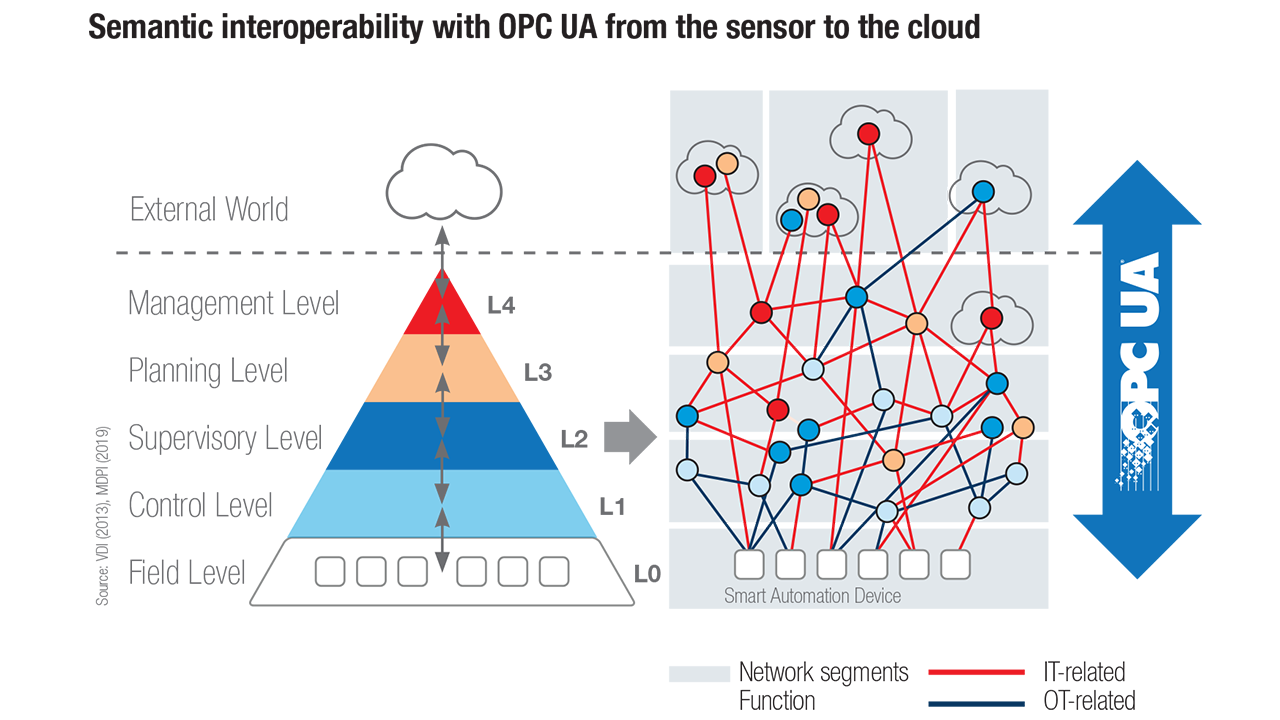 The OPC Foundation continues to forge ahead with technology advancements. Recent highlights include the launch of the UA Cloud Library developed in conjunction with CESMII and completion of the second release candidate for the OPC UA FX (Field eXchange) specifications that is part of the FLC initiative.

The UA Cloud Library makes it easier than ever to find, share, explore, and use OPC UA Information Models by applications, end-users, and standards bodies.

The globally available UA Cloud Library was co-developed with the Clean Energy and Smart Manufacturing Innovation Institute (CESMII). With its multi-cloud architecture, the UA Cloud Library saw contributions from all major cloud vendors leveraging open interfaces and is available for sharing, finding, and collaborating on OPC UA Information Models.

While shop floor (OT) components routinely discover and use data structures and services of other OPC UA components, direct access to such semantic information has not been readily available to cloud-based applications due to security considerations. The UA Cloud Library eliminates this gap by providing IT and cloud-based applications access to semantic information directly from the cloud instead of manually getting it from the OT systems.

“The UA Cloud Library is the missing link that makes OPC UA information models available in the cloud on a global scale without requiring a connection to physical machines,” said Erich Barnstedt, Chief Architect Standards & Consortia, Microsoft Corporation, and chair of the UA Cloud Library working group. “It enables OPC UA Information Models – used as blueprints for industrial digital twins – to be looked up and matched against time-series machine telemetry data provided by cloud-based analytics software, which is a common requirement in Industrial IoT projects.”

“It was an honor to partner with the OPC Foundation in this strategic initiative,” said John Dyck, CEO of CESMII. “The UA Cloud Library is truly an important step on the journey to Smart Manufacturing Interoperability and will pave the way for dramatic simplification and cost savings for manufacturing systems!”

Stefan Hoppe, President and Executive Director of the OPC Foundation, said that “the value of what the OPC Foundation and CESMII joint working group created cannot be overstated because it equips us with the mechanism needed to facilitate access to all known OPC UA information models via an open, global, single-source of truth.”

“Beyond the value the UA Cloud Library brings to applications, it will help with global OPC UA information model coordination and harmonization efforts by making it easy to search and cross-reference the latest OPC UA companion specifications in real-time. Finally, the UA Cloud Library will serve a crucial infrastructure role in Smart Manufacturing initiatives that depend on interoperability.” 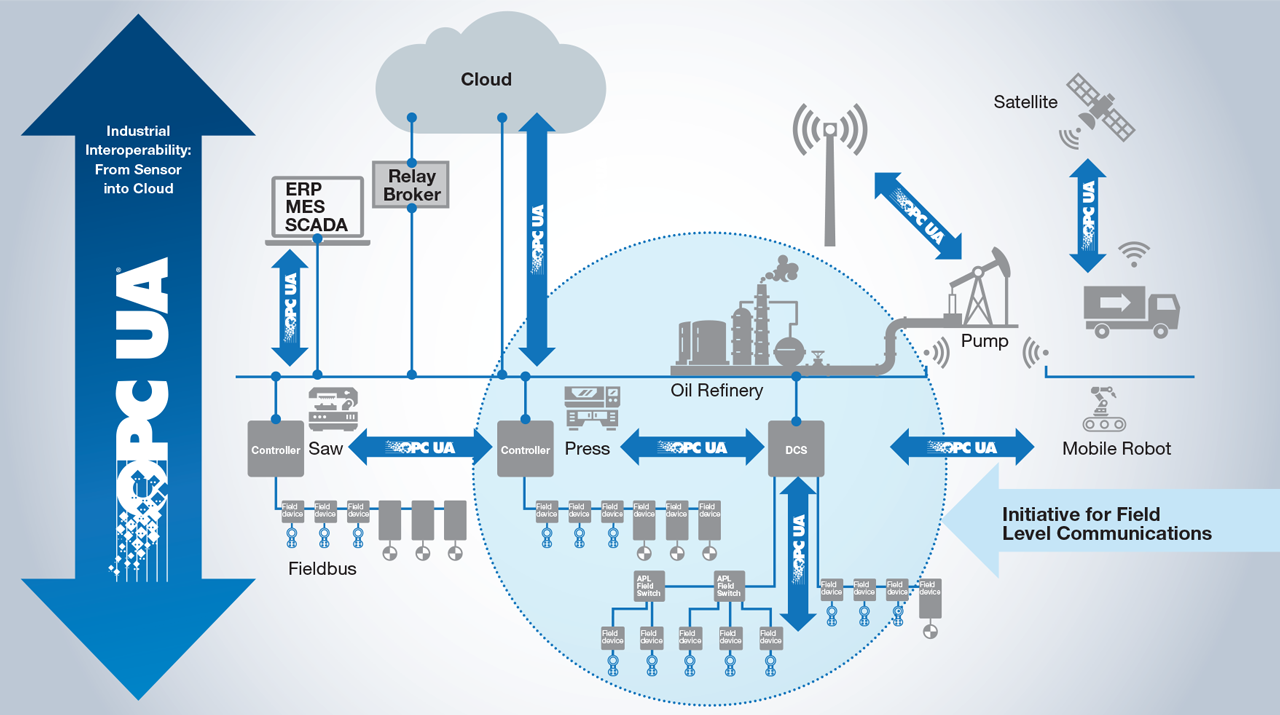 Three years after its launch, the OPC Foundation’s Field Level Communications (FLC) initiative has completed the second release candidate of the OPC UA FX (Field eXchange) specifications and has started the review and release process for them. In addition, a multi-vendor demo with controllers and network infrastructure components of 20 companies – among them the world’s largest automation suppliers – has been realized to showcase the cross-vendor interoperability of automation components for the most diverse use cases in Factory and Process Automation.

A multi-vendor interoperability demo has been implemented, combining components from a total of 20 manufacturers, among them the world’s largest automation suppliers, to enable cross-vendor data exchange via OPC UA and the extensions for the field level, OPC UA FX (Field eXchange).

The focus of the interoperability demo is on horizontal communication between automation components, i.e. controller-to-controller (C2C( communication. With the UAFX extensions, the controllers are able to exchange process data with other controllers using UAFX Connections and PubSub mechanisms. In the demo itself, process data is exchanged via UDP/IP using wired Ethernet or Ethernet TSN, as well as in combination with a 5G wireless connection.

In the demo, the controllers act as UAFX Publisher and/or UAFX Subscriber, which exchange data via UAFX Connections. The controllers are configured and interconnected via so-called UAFX Connection Managers, which are either integrated into the controller or implemented as an external software component. The Connection Managers used were implemented by Siemens and Unified Automation. All controllers are monitored in real time via a central dashboard which visualizes the respective status, selected process data and other information from the UAFX asset information model of the automation components.

Two additional demos were implemented to highlight two highly relevant aspects for field level communications: Firstly, a multi-vendor demo demonstrating deterministic transport in a converged network based on OPC UA over TSN using the UAFX extensions with a direct Layer 2 mapping to optimize the efficiency for high-performance real-time applications. Secondly, the prototype of a Safety Testing Tool which will be used for development-accompanying testing and certification of OPC UA Safety devices based on the new OPC UA Safety Specification which is now also supporting PubSub and UAFX.

Peter Lutz, Director Field Level Communications of the OPC Foundation said: “The completion of the second release candidate and an impressive multi-vendor live demo is a major achievement because the specifications are now mature so that the member review process could be started.”

Since the start of the Field Level Communications Initiative in November 2018 more than 320 experts from over 65 OPC Foundation member companies have contributed to generate the technical concepts and elaborate the specification contents for extending the OPC UA framework for field level communications, including Determinism, Motion, Instruments and Functional Safety.

Thomas Brandl from Bosch Rexroth, who is chairman of the Field Level Communications Initiative’s Steering Committee, commented: “It is remarkable how many companies – including all major automation suppliers and key technology providers from all over the world – have been contributing to our initiative and how constructively all the experts have been working together to advance the common goal of bringing OPC UA to the field level.”

Progress has also been made by two working groups of the Field Level Communications Initiative, contributing to a harmonized solution for motion and safety applications:

The Motion Working Group has started work in May 2020 to develop an architecture and common information model for motion devices which has resulted in requirements specifications and technical concept creation.

As an OPC Foundation specification, MDIS is now freely available for market adoption and the MDIS working group is open to all interested OPC Foundation members.

OPC consolidated and took over the MCS-DCS Interface Standardisation (MDIS) specification ownership. Effective immediately, as with all OPCF Companion Specifications, MDIS is freely available for adoption by all interested parties at no additional cost. The OPCF MDIS working group, co-chaired by Markus Koenig from SubSea, Tim Fortin from Honeywell, and Paul Hunkar from DS Interoperability, now oversees the ongoing maintenance and expansion of the standard. Original MDIS network group members will continue working in the OPCF working group.

MDIS was formed with a vision to optimize and standardize communications between subsea Master Control Stations (MCSs) and topside Distributed Control Systems (DCSs). A standardized MCS-DCS interface simplifies the implementation of data communications and increases data quality. Companies that adopt the MDIS standard, whether they are the operators or automation vendors, benefit from simplified integration and commissioning of the MCS–DCS interface, reduced maintenance efforts, and minimized risk of interface failures that lead to downtime and expensive subsea equipment repairs.

Shreekant Mehta, Senior Vice President, Energy at Sagentia Innovation (which incorporated OTM Consulting) commented, “MDIS was started as an OTM network in 2009 with support from operators and vendors. The collaboration seen within MDIS is unique, and we have seen some great technology development leading to three interoperability testing meetings where interfaces were proven. We are delighted to see the MDIS specification reach maturity and have a new home with OPC who will maintain and update this specification as needed. We’d like to thank the operators, integrators, vendors and OPC who have worked together to create this industry standard.”