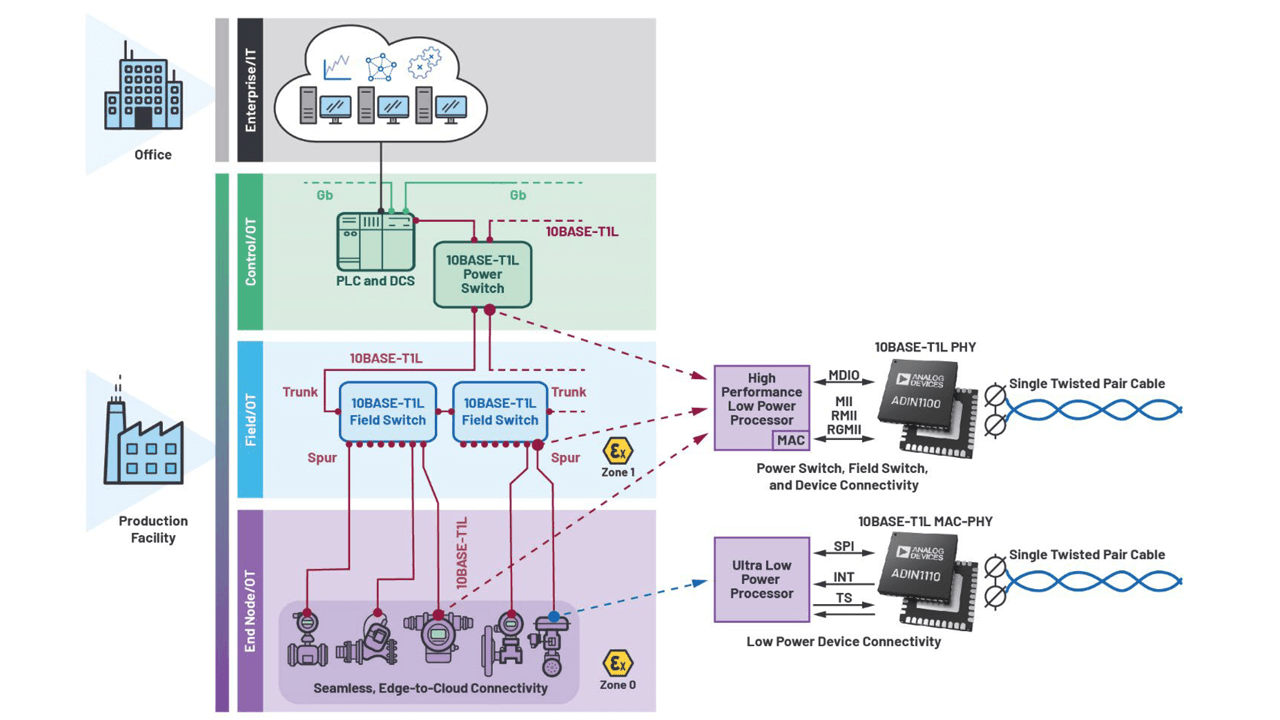 This article explains how to connect to an increased number of low power field or edge devices with a 10BASE-T1L MAC-PHY. It will also detail when to use the MAC-PHY vs. a 10BASE-T1L PHY and how these systems meet the requirements of tomorrow’s Ethernet-connected manufacturing and building installations.

Single-pair Ethernet 10BASE-T1L use cases, including Ethernet-APL, continue to expand across process, factory, and building automation applications driven by the requirement to connect more devices to Ethernet networks. With more devices connected, richer datasets are made available to the higher level management systems, leading to significant increases in productivity while reducing operating costs and energy consumption.

The vision of Ethernet to the field or edge is to connect all sensors and actuators to a converged IT/OT network. To achieve this vision there are system engineering challenges, as some of these sensors are limited in power and space. There is a growing market of low power and ultra low power microcontrollers with significant internal memory capabilities for sensor and actuator applications.

But most of these processors have one thing in common—with no integrated Ethernet MAC, they don’t support an MII, RMII, or RGMII media independent (Ethernet) interface. A traditional PHY cannot be connected to these processors. 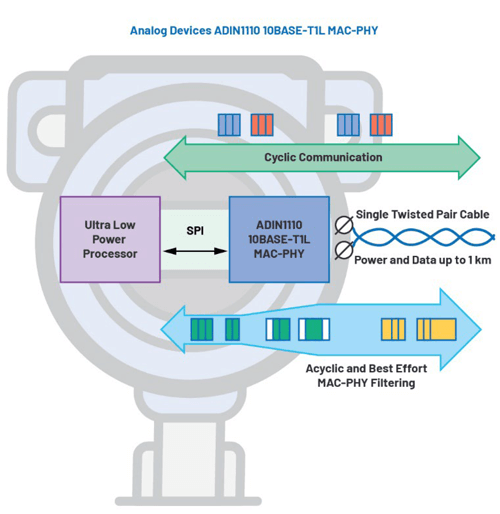 A 10BASE-T1L MAC-PHY significantly reduces the power and complexity of devices with advanced packet filtering.

The MAC functionality is now integrated directly with the 10BASE-T1L PHY. A 10BASE-T1L MAC-PHY provides device architects increased flexibility and choice by enabling a variety of ultra low power processors. By optimizing the application partitioning, a 10BASE-T1L MAC-PHY enables lower power field devices for Zone 0 intrinsically safe deployment through what is referred to in the process industry as Ethernet-APL. Within intelligent building applications, a MAC-PHY will enable more lower power devices to be connected to an Ethernet network. Intelligent building applications include HVAC systems, fire safety systems, access control, IP cameras, elevator systems, and condition monitoring. 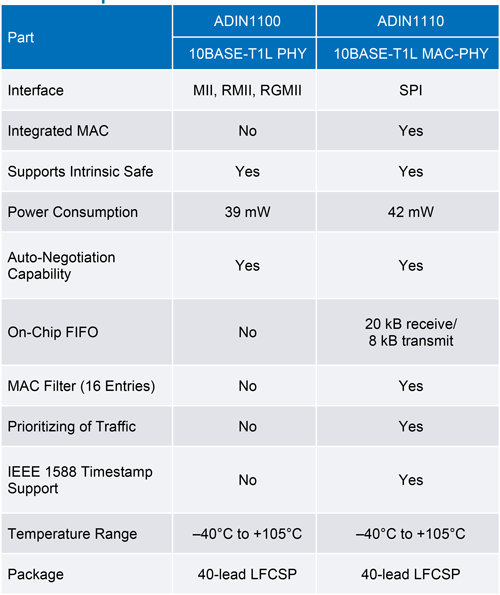 A 10BASE-T1L MAC-PHY significantly reduces the power and complexity of devices with advanced packet filtering.

The integration of the MAC functionality with a 10BASE-T1L PHY provides new features to optimize Ethernet traffic on the network. A 10BASE-T1L MAC-PHY with advanced packet filtering will significantly reduce the overhead of handling broadcast and multicast traffic, while freeing the processor from this task. To filter by the destination MAC address is key.

Instead of just a single MAC address, a MAC-PHY can support filtering using up to 16 unicast or multicast MAC addresses. In addition, address masking is supported for two MAC addresses. This gives a great degree of freedom, filtering for the device address as well as commonly supported multicast addresses such as LLDP (Link Layer Discovery Protocol).
By supporting an additional queue for higher priorities, some messages can be prioritized and therefore get improved latency and robustness. The priority of a frame can be identified by the MAC filtering table. For example, broadcast messages can be fed into a lower priority queue and unicast into the higher priority queue to prevent the receiver from being overloaded by a broadcast storm or traffic surge. These MAC-PHY filtering features enable netload robust devices. Frame statistics are also gathered by the MAC to assist in monitoring the network traffic and the quality of the link.

The MAC in the MAC-PHY also supports IEEE 1588, and therefore 802.1AS time synchronization as required in process automation. The MAC-PHY provides support for a synchronized counter, timestamping of received messages and timestamp capture for transmit messages. This greatly reduces the complexity of the software design, as there is no further hardware support needed to implement time synchronization beyond the MAC-PHY itself.

The MAC can generate an output waveform timed to the synchronized counter, which may be used to synchronize external application-level operations. The SPI interface supports the Open Alliance 10BASE-T1x MAC-PHY Serial Interface. The Open Alliance SPI is a new and very effective SPI protocol designed specifically for use with a MAC-PHY. 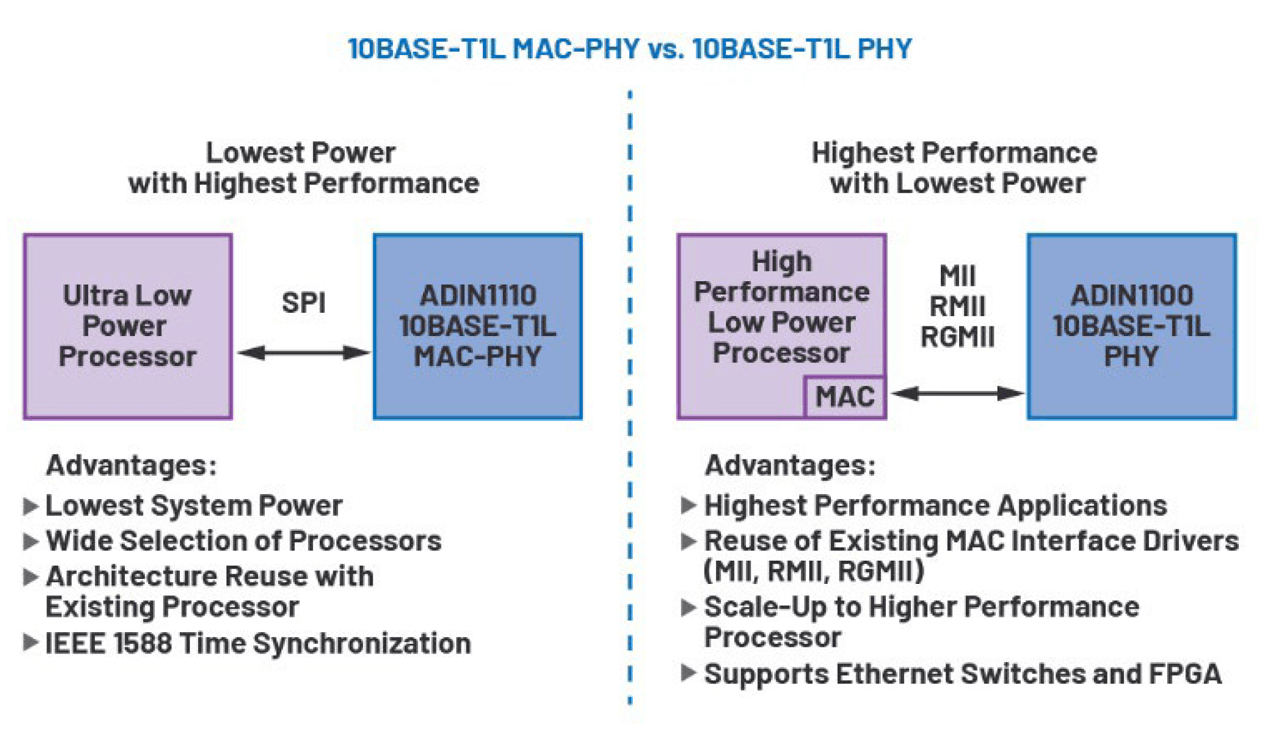 Comparison of the advantages of a MAC-PHY vs. a PHY for 10BASE-T1L connectivity.

With the availability of both 10BASE-T1L PHYs (ADIN1100) and 10BASE-T1L MAC-PHYs (ADIN1110), device architects now have increased flexibility to meet the requirements of tomorrow’s Ethernet-connected manufacturing installations.

Ultra low power devices and high performance devices can be deployed on the same Ethernet network and comply with strict maximum power limitations for hazardous area use case requirements.

The ADIN1100, ADI’s 10BASE-T1L PHY, enables low power Ethernet connectivity via MII, RMII, and RGMII MAC interfaces to a host processor with only 39 mW of power consumption—see Table 1 for a comparison of the ADIN1100 10BASE-T1L PHY and ADIN1110 10BASE-T1L MAC-PHY. Both products are based on 10BASE-T1L core capability of a full-duplex, DC balanced, point-to-point communication scheme with PAM 3 modulation at a 7.5 MBd symbol rate with 4B3T coding.