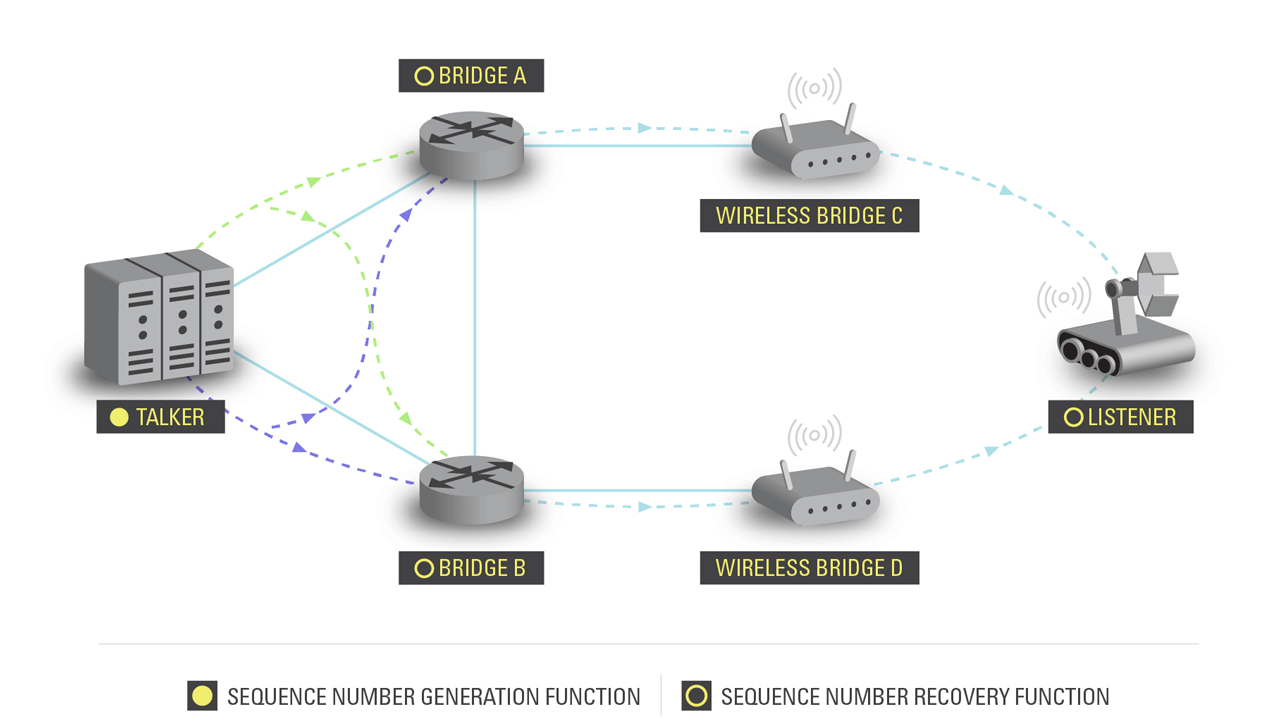 Wireless TSN can make factory floors safer, more efficient, and more transparent. Wireless TSN use cases will necessarily differ from wired networks, but we can already enable a number of wireless applications. As TSN and wireless capabilities evolve, more applications and new key performance indicators may be supported.

Industry 4.0 needs time-sensitive networking (TSN). Everyone in the value chain, from silicon manufacturers, to network equipment vendors, to industrial network managers, recognizes the value of a uniform network, based on standard connectivity, with the security, guaranteed latency, and determinism features required for industrial automation.

As previously explored in this publication, a real-time network based on open IEEE Time-Sensitive Networking (TSN) and Local Area Network (LAN) standards could allow traffic and devices of all types to coexist on the same network. This not only simplifies infrastructure; it’s a crucial step towards a fully converged network, where all compatible devices can interact, share data, and be subject to centralized management and control.

Since 2018, the joint IEEE/IEC 60802 Task Group has been working to define TSN profiles for industrial applications. When complete, these profiles will define features, options, default configurations, protocols, and more for industrial automation networks, ensuring that time-sensitive operations traffic can coexist with other data on the same network. These specifications are expected to be finalized this year. The world won’t wait – as IEEE/IEC 60802 nears ratification, stakeholders across the value chain must plan for real-world deployment of industrial TSN, both wired and wireless.

Wireless TSN can make factory floors safer, more efficient, and more transparent. Wireless TSN use cases will necessarily differ from wired networks, but we expect that TSN capabilities over wireless, such as time synchronization and time-aware scheduling, can already enable a number of wireless applications. We can also anticipate that as TSN and wireless capabilities evolve, more applications and new KPIs (key performance indicators) may be supported. What will be required for future-proof industrial wireless networks?

In a February 2022 white paper (link at end of this article), the Avnu Alliance documented market requirements and expectations for wireless TSN including how wireless segments will interface with wired networks. As the current phase of early wireless TSN technology development, trials, and testing proceeds, these findings represent a set of common targets for discussion and alignment.

The Avnu whitepaper examines wireless TSN industrial use cases alongside use cases for the professional audiovisual and AV/VR markets. They found that, in order to support time-sensitive traffic, wireless networks would need to meet KPIs across five categories:

In some applications, jitter, measured as the variation in the latency of received data packets, is also an important metric in addition to bounded latency.

KPIs for industrial use cases

Closed loop control encompasses synchronous communications among sensors, controllers, and actuators. This is the foundational use case for most industrial applications, and specific requirements will vary widely. In their examination, Avnu defines a KPI range to capture the majority of wireless use cases.

Though our focus here is industrial use cases, it’s interesting to note that a roughly similar set of KPIs emerges across professional AV and AR/VR applications in Avnu’s full white paper. This commonality suggests that it will be possible for silicon vendors to create components that address diverse markets, accelerating the growth of the overall TSN ecosystem.

802.1Redundant streams with 802.1CB FRER including wired and wireless links.

Achieving bounded latency with high reliability requires strict priority across for time-sensitive data across the wireless network; traffic shaping (defined by the 802.1Qbv specification) is a fundamental TSN feature to address this requirement. The 802.1Qbv standard builds on TSN time synchronization to define a set of timed gates to control the data queues associated with various traffic classes. Any wireless TSN bridge must be able to identify, prioritize, and deliver time-critical data within time windows that are defined according to a schedule for the network.

Industrial applications, especially those with safety-critical elements, will also need to incorporate TSN redundancy capabilities in order to meet extremely high reliability KPIs. The IEEE 802.1CB Frame Replication and Elimination for Reliability (FRER) standard defines an approach to enhance reliability by replicating data over multiple streams and paths. It provides resilience against both device and link failures. This service is transparent to the underlying MAC/PHY link, so it should operate equally well over wired and wireless links. 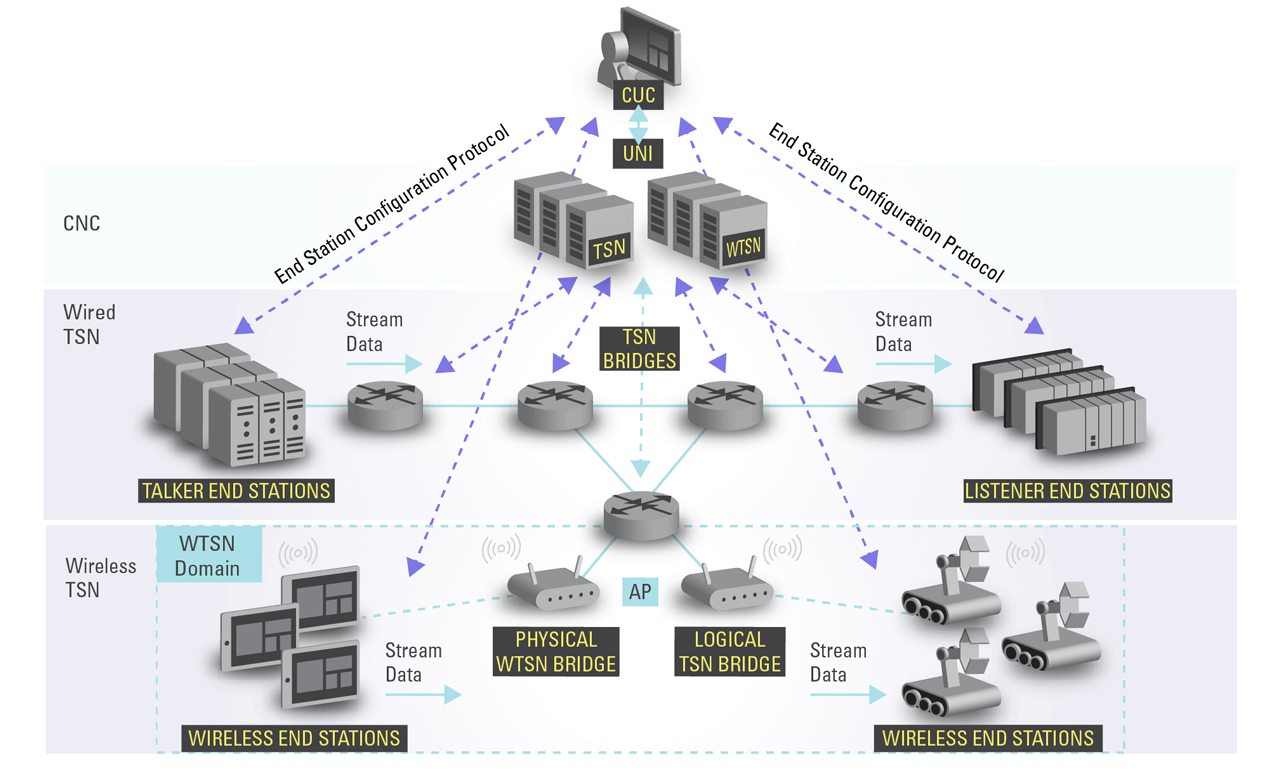 A 5G system can connect to a TSN-capable network as a “virtual” or “logical” bridge. The 3GPP Rel. 16 specification defines the interfaces required for this integration. Under this model, TSN traffic is tunneled across the 5G network segments by 3GPP defined gateways for TSN translation. The 5G system uses its own capabilities, including 5G clock synchronization and URLLC (ultra-reliable low latency communications) to mirror some of the priority features defined in TSN standards such as 802.1Qbv and 802.1CB.

Given the emerging capabilities of both Wi-Fi and 5G and the ongoing work by a variety of standards development organizations and alliances to define requirements, guardrails for the path to wireless TSN are emerging from the fog. Put simply, we have a plan, but we need to make sure it’s implemented successfully. To ensure that wireless networking equipment is meeting the needs of Industry 4.0 (as well as other markets such as Pro AV), that various kinds of network traffic can coexist in the same TSN network, and that end devices and networking equipment interoperate successfully, stakeholders from across the WTSN value chain must take an active role in refining these requirements, defining test procedures, and sharing what they learn in the development process.

The Avnu Alliance is an ideal venue for such discussions. They develop test specifications for TSN features, and are currently working to extend test specifications from wired to wireless devices and systems. This unified approach to testing the capabilities of wired and wireless systems is necessary to achieve the end goal of uniform, interoperable TSN infrastructure across all network segments.