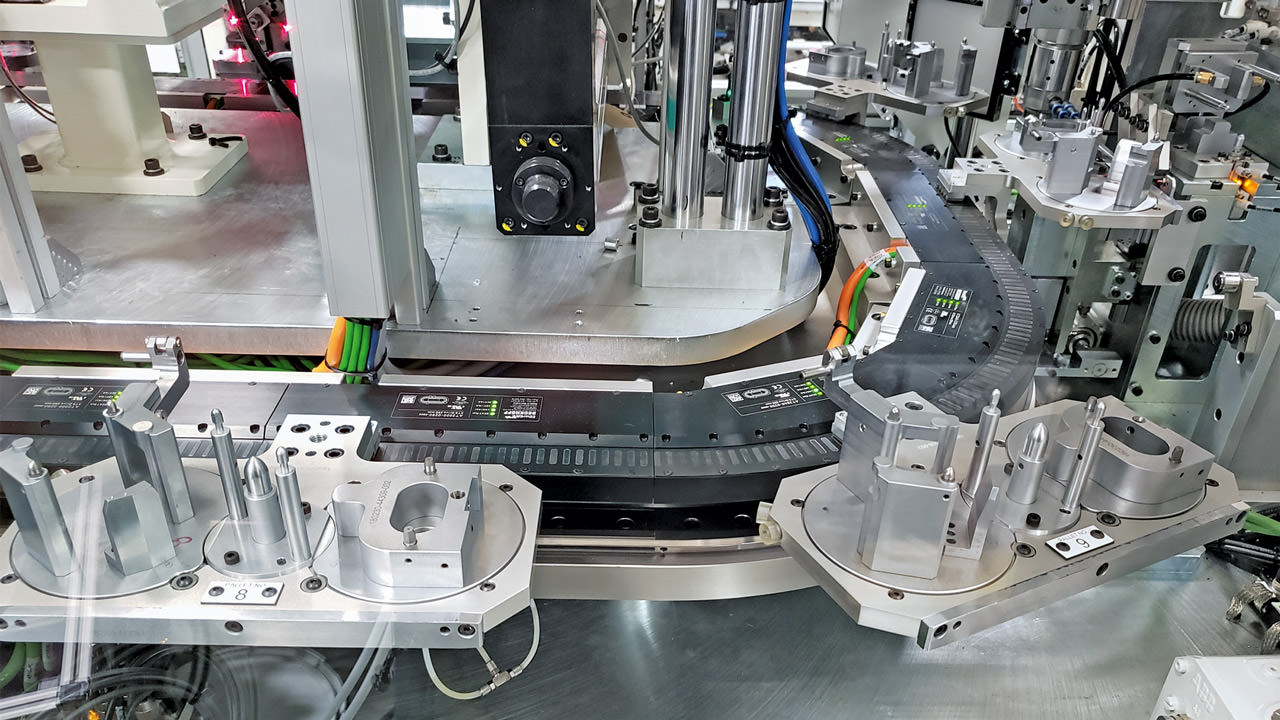 An XTS-based assembly line uses an advanced automation control system to minimize the machine footprint for automotive industry customers. After a second modernization project, two different types of pumps can be produced on a highly condensed assembly line with the same small footprint.

How do you design a new assembly line and go on to reduce the footprint of the concept by another quarter? And how can you later increase the productivity of this highly consolidated line even further? Canadian automation expert Eclipse found the answer in the linear XTS transport system from Beckhoff. After the second modernization, the assembly line can produce two different types of pumps on the same small footprint.

Eclipse Automation in Cambridge, Ontario, was founded in 2001 to serve the custom automation market and has grown exponentially. “We serve many different market segments in addition to automotive and transportation, such as life sciences, consumer products and even nuclear energy,” said Jeff Werner, General Manager for Eclipse. The company constantly researches leading-edge solutions to help customers not just succeed in but truly disrupt their industries. “We test all kinds of new technologies, including artificial intelligence, remote training, virtual reality for maintenance systems and any components that add precision and flexibility,” Werner said. “One technology that has proven particularly important to us is linear transport systems.”

Recently, Eclipse updated a successful system for a customer that uses the eXtended Transport System (XTS) to assemble automotive transmission pumps. This customer had requested the first system to replace several legacy machines.

At that time, the machines could not achieve the throughput and quality standards necessary for this high-volume product, according to Matthew Kelly, Software Design Supervisor at Eclipse: “The previous machines used rotary dial tables and similar components. Each station only did one process, and if any station went down, it impacted the entire line.”

While increasing functional capabilities, the custom solution from Eclipse needed to minimize footprint. “Floor space is always at a premium, but this customer’s assembly and process equipment is extremely consolidated. When we proposed the system, they said, ‘We like the concept, but make it 25% smaller.’ We didn’t know if that was possible,” Werner said. To solve these challenges, Eclipse worked closely with the local Beckhoff Canada team, including Regional Sales Manager Dean Herron and Applications Specialist Andy Burleigh.

In the first three machine cells, operators place the pumps on pallets attached to XTS movers. The XTS systems are 12 m long with 18 movers in the first cell, 6 m with 12 movers in the second and 10 m with 18 movers in the third. The carefully calculated pitch of the pallets enables micron-level positioning. When all assembly processes are complete, the operator moves the pump to the next cell. At the third cell, a small conveyor moves the pump to the fourth cell where a robot lifts the completed pump in front of two GigE cameras for a final vision inspection, then places it on a conveyor for outfeed.

“XTS transitions products from station to station very quickly and accurately, and if there’s an issue with a part at any point in the process, we can bypass other stations and simply remove it,” Kelly explained. “We grouped multiple processes into a single station, which helped us further decrease footprint. With all the processes and tooling, it was the most condensed automation system I’ve ever seen.”

The first Eclipse assembly machine exceeded expectations and is still in use today. In December 2019, however, the automotive supplier requested a second machine with a new challenge: It would need to make a second pump on the same system. The pumps are different sizes and for different vehicle makes. This posed a challenge for the previously designed pallets, not to mention that some assembly steps happen in different orders for the two pumps. To maintain high throughput, the system couldn’t afford the downtime to purge all of one pump type and then perform a lengthy changeover.

Working with the local Beckhoff team, Eclipse created a new concept relying on the fast cycle times of EtherCAT and the flexibility of XTS. “The system allows operators to quickly release and replace the pallet with a second type. This new pallet indexes forward and its specific position is measured to determine an offset. We apply those offsets to each individual pallet and make sure that components and parts line up exactly for the processes. So, the operator can easily load part type A, wait one cycle, and then load part type B with negligible downtime,” Werner said.

Also, because each mover appears as an individual motion axis, they are not linked as in traditional designs. Instead, they can freely move workpieces around the track to specific process steps as needed, even if the order is different between the two pumps. 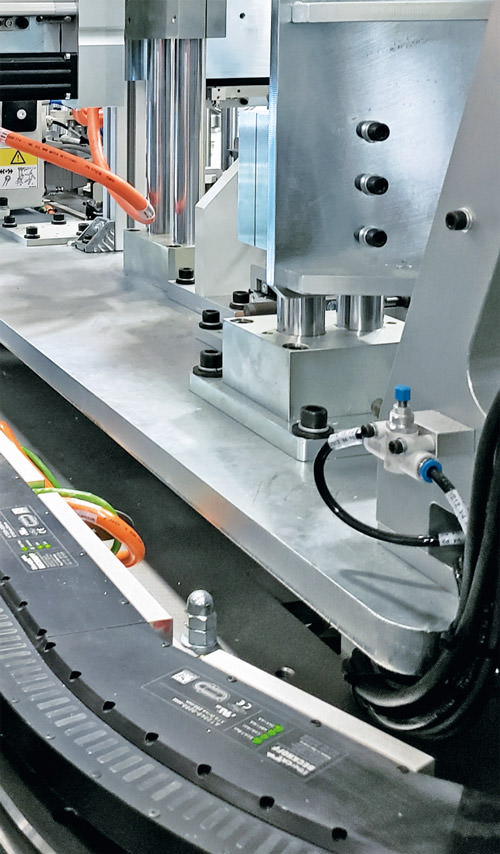 In addition to the three XTS systems, the assembly line relies on other EtherCAT and PC-based automation technologies from Beckhoff. Each of the first three cells features a C6930 control cabinet Industrial PC (IPC) to control the cell’s XTS track and peripheral devices.

TwinSAFE is implemented for functional safety across the entire line, and the IPCs communicate via EtherNet/IP to a secondary machine controller that controls other portions of the line. However, EtherCAT provided the system’s main communication and I/O. “Real-time EtherCAT synchronization with robotics and servo components allowed the engineers to perform interpolated motion for different dispense processes – in particular, applying adhesive in intricate patterns,” explained Herron.

To make this advanced functionality possible, TwinCAT 3 automation software was critical. The universal engineering and runtime platform from Beckhoff allowed Eclipse engineers to program G code that enables the XTS and Beckhoff AM8000 servomotors to perform coordinated motion for high precision dispensing. In addition, Eclipse took advantage of the capability to program with the object-oriented extensions of IEC 61131-3, predefined and custom function blocks, and computer science standards found in Microsoft Visual Studio®. “For programming pallet control, pallet offset tables and similar requirements, Beckhoff offers many advantages compared to other options, and we save a significant amount of engineering time,” Kelly pointed out. 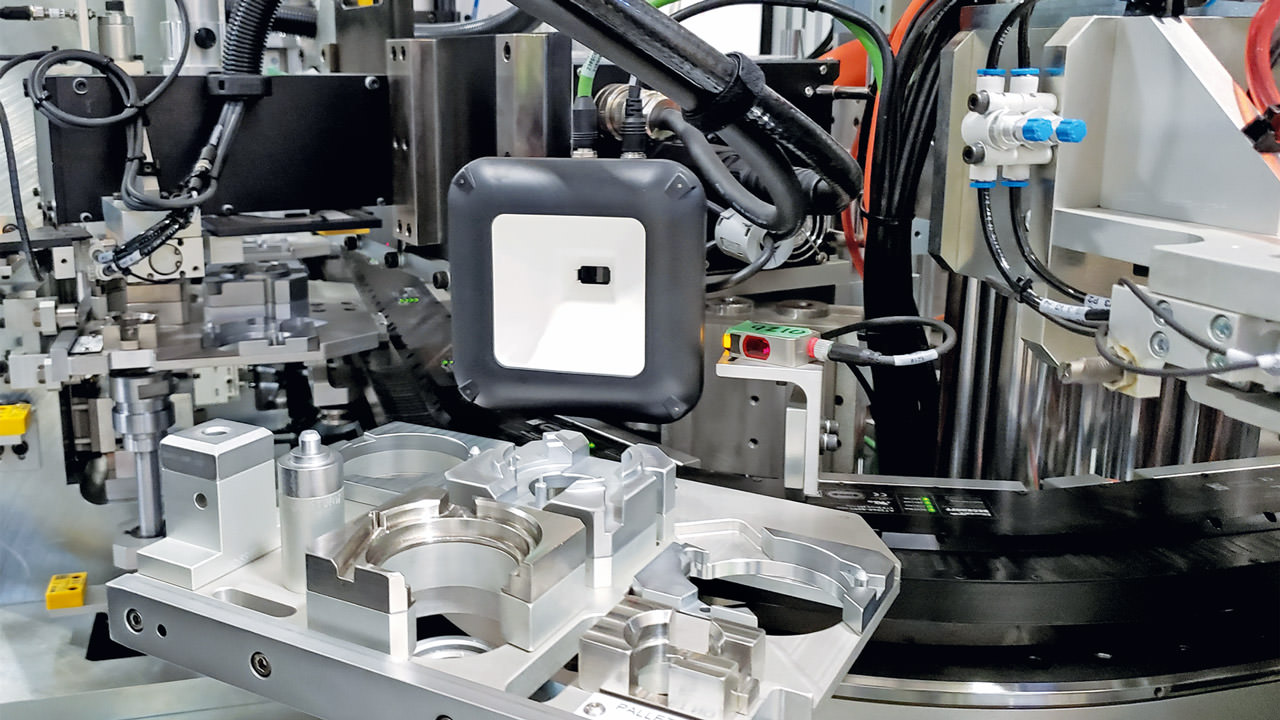 The system’s pallet-type workpiece carriers, which attach to XTS movers, can be swapped out to assemble a different part without having to purge the system. Picture: © Eclipse Automation

With the innovative design by Eclipse, the updated transmission pump assembly system met the specified cycle time of 20.2 s per part with the micron-level accuracy required. Since commissioning finished in early 2021, the system has produced roughly 1,000 parts per shift, running part A and part B in separate batches.

The easy release and attachment of pallets, along with the instant automatic indexing of XTS, almost eliminated changeover times, pushing them down from more than an hour to just one minute. “The customer was absolutely overwhelmed by the ability to perform that changeover considering the system’s extreme compactness and complexity of process,” Werner said. Both controls and mechanical engineering ensure easy release of these pallets without removing a single bolt. Pallets simply move to a storage buffer, and if one is damaged, the operator can easily replace it.

According to the company’s experts, Eclipse has kept innovation in its DNA. The company has tackled many other unprecedented high-speed and micro-assembly applications, including several Covid-19 test kit applications that also use XTS and PC-based control. Werner sees this as important for providing highly efficient, cost-saving solutions to customers as well as attracting new engineering talent to work at Eclipse.

“Most students are not learning traditional PLC programming. Instead, they leave university with a far better understanding of PC-based control systems than ever before, and that grows every year,” he said. “Beckhoff has proven to be a reliable partner for this as well as all areas of automation technology.”