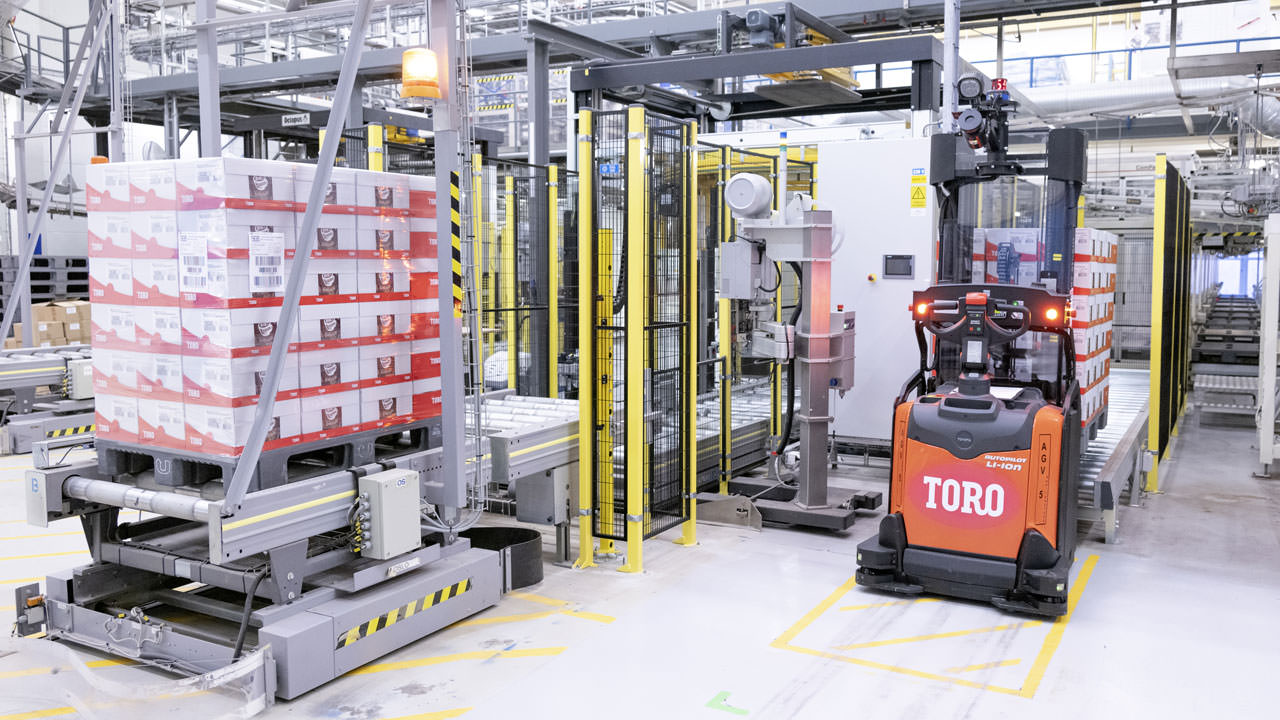 A state-of-the-art industrial network provides a stable, reliable, and secure communication backbone for all operations at the Orkla Group facility in Indre Arna. The solution provides excellent availability and performance of operations technology (OT) thanks to a segmented and redundant Layer 3 network.

A highly automated factory that has been modernized and expanded nine times over the years manufactures the dry mixes for soups, sauces, cakes, and waffles that are produced by Toro, an Orkla Group brand, in its Indre Arna facility.

The latest addition to the facility is a state-of-the-art industrial network that provides a stable, reliable, and secure communication backbone for all operations. The solution provides excellent availability and performance of the Operation Technology (OT) for today and for many years to come, thanks to a segmented and redundant Layer 3 network from Siemens. It also provides a defined interface to the company’s enterprise network.

According to Ståle Faugstad, technical lead for automation and IT for Orkla in Indre Arna, using the latest production technology has always been part of the Orkla tradition.

“We upgraded our operations with state-of-the-art automation systems in the mid-90s, and even today, the Indre Arna factory is very advanced in this respect. Nevertheless, several components had reached the end of their lifecycle, and Orkla could not upgrade its network security to today’s standards with the existing capabilities,” Faugstad said. “With the existing systems, we couldn’t operate the factory any longer as we needed to. We needed to act.” 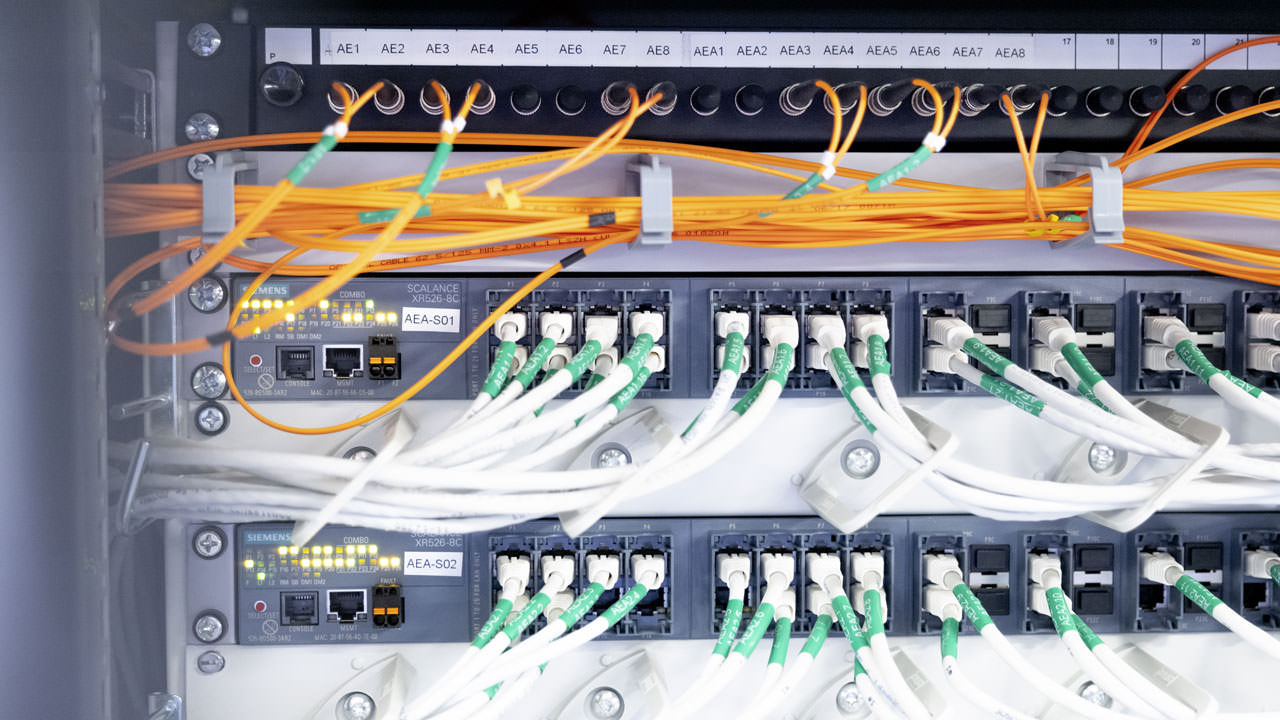 Inside the system: Two of the high-performance Scalance XR-500 switches that form the new network backbone at the Indre Arna facility.

At first, a pure IT solution seemed to be insufficient. “We cannot have a failure in the network, because then we lose production,” Faugstad said. So the solution had to have robust, stable, industrial-grade components and he emphasized that “we needed to have the ability to service the network ourselves locally to make sure we would have the shortest possible response times should something go wrong.” In an IT environment with a standard service provision, you would typically have just one virtual local area network (VLAN).

The problem with this is that any issue can then quickly spread through the entire factory. “It´s obvious that a physically separated OT network became necessary,” Faugstad said.
At the same time, need for real-time communication occurred with all the associated requirements. Finally, planning and building a new OT network is a challenging task, so a reliable partner with expertise for consultancy had to be integral part of all activities.

He said that they had gone through several re-automation phases recently, where the company upgraded installed systems to improve performance but also to maintain service the components for the long term. Among the components recently upgraded were the programmable logic controllers (PLCs) on the various machines for mixing and packaging, where Orkla introduced Simatic S7-1500 PLCs. The facility also uses many other Siemens systems, including Sitop power supplies and Simatic HMI systems. However, the automation and IT systems were proving increasingly hard to maintain in recent years, and Orkla was experiencing network stability issues.

Faugstad and his team carefully evaluated the various options and finally proposed implementing a new, dedicated industrial network for the OT level.

“The challenge was clear,” he said, “but what was not so obvious was which solution would fit our requirements – a new fieldbus at the automation level or a dedicated OT network? We went to trade shows and contacted various vendors as well as our own IT department, and in the end, we decided that the OT solution made the most sense for us.”

He added: “we already had TCP/IP (Transmission Control Protocol/Internet Protocol) communication for several processes such as printing and connecting to the enterprise resource planning (ERP) level; and by upgrading our network, we could have both communications between our production departments and between the management and production floors.”

Faugstad and his team opted for an industrial network solution from Siemens – and they have not regretted this decision, he says. The new network provides the uptime, reliability, security, and serviceability that the production communication requires.

At first, the IT department had some concerns regarding the type and structure of the OT systems, Faugstad said, “but we were able to demonstrate that what we needed from the network was not achievable with an IT solution alone but required production and automation expertise as part of the application.”

One key differentiator between OT and IT is uptime without any failures, Faugstad said. The new OT network consists of a redundant backbone implemented as a fiber-optic Industrial Ethernet ring that links the individual VLANs 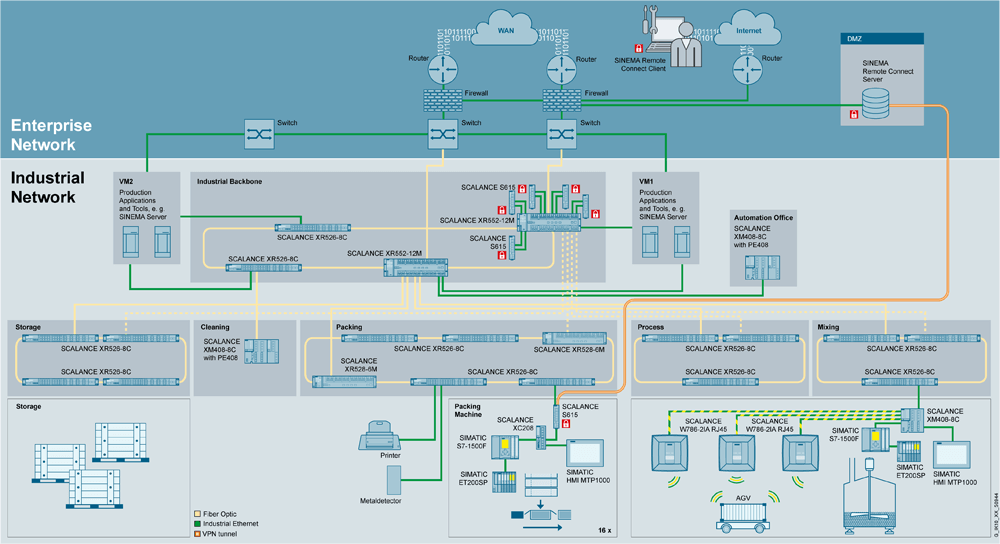 Scalance X Layer 3 switches handle the traffic within the backbone. “This way, we can route the traffic in the OT network, which makes the backbone very fast and stable,” Faugstad said. Connected to this backbone are the virtual data servers: “We have a total of 18 servers in a virtual environment that are part of the Orkla domain managed by our IT department. But we perform all day-to-day service locally ourselves. That way, we really have the best of both worlds,” he added.

Linked to the backbone are more than 40 VLANs for the production floor. All VLANs are also equipped with Scalance X switches and protected by Scalance S Industrial Security Appliances. The highly segmented network architecture is another aspect that differentiates an OT network from an IT network.

“By isolating units in their own VLANs, we can limit the effect to just one cell – if anything goes wrong, the communication with parts of the mixing unit, the packaging department, or the utilities might have some issues, but not the entire production process,” Faugstad said.

Some parts of the OT network require real-time communication, said Faugstad: “We have many Automated Guided Vehicles (AGVs) on the production floor, for example, in the weighing and dispensing area. Some of these have their own scales, and they need to communicate their weight readings back to the PLC for confirmation in real time – and do so every time, as the weighing of products and ingredients is critical for product quality.”

In this part of the facility, the wired network is extended by a wireless solution with Scalance W, “which we have had absolutely no issues with,” Faugstad added. “It works reliably in an industrial environment, and it has done so from day one. A very good solution.” 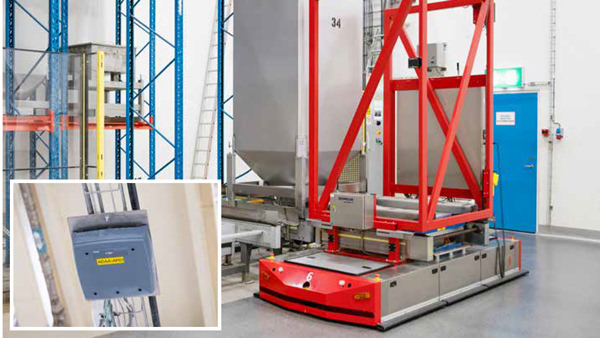 In the weighing and dispensing area, AGVs can communicate weight readings back to the PLC in real time via a wireless network that is also part of the Scalance W solution.

Faugstad and his team developed the application for the AGVs themselves with support from Siemens.

“That way, we could implement exactly what we needed and integrate it with the automation level,” Faugstad explained. “This is also why we chose Siemens as a partner: they have both automation and network expertise, so you can discuss the entire application with them. For example, we had some issues with communication across VLANs, and we got the Siemens support team involved. They identified the cause and came up with a solution within just a few hours, because they know how PLC-to-PLC communication works, they know the protocols, and they know how to integrate this with the OT network.”

Siemens took a consultative approach for the planning, design, and implementation phases of the industrial network through its Professional Services team, helping Orkla to choose the best network architecture and system solution, and the team will also service the OT network. The result is a stable, reliable, and secure solution for data acquisition, order handling, and equipment service.

“Our colleagues in the automation team have their own VLAN for remote servicing of the PLCs and automation systems, and they can fix the majority of issues via the network from their central office,” Faugstad stated. “We can provide partners and vendors with secure VPN access to machines or equipment units, and we can manage this access through the management software for VPN and remote connections. We are using Sinema Remote Connect for this. We also use the Sinema Server network monitoring software to identify issues in the network and fix them ourselves. It’s very convenient – so convenient that Orkla considers this solution as a model for other sites as well.” 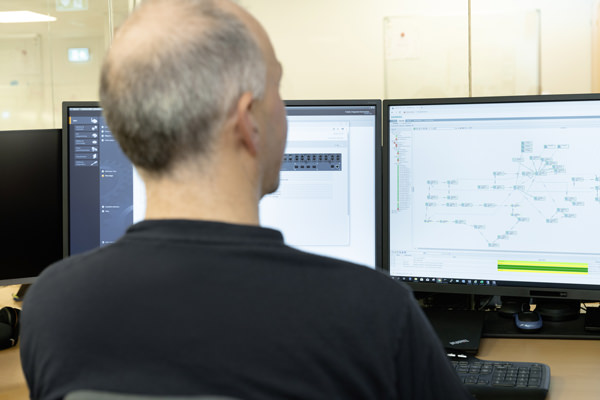 Using the Sinema Server network monitoring software, the staff at the Indre Arna facility can identify issues in the network and resolve them directly by themselves.

The Siemens´s solution provides stable communication for current operations, and having a robust and reliable network has made day-to-day work easier.

“As we are no longer busy addressing network issues, we have the resources for upgrading and expanding the solution, improving things and not just keeping them running,” Faugstad said. “Current projects include an in-depth security assessment of the VLANs, along with ongoing expansions of the systems and putting production data to use in new applications.”

“We are already calculating performance indicators such as overall equipment efficiency (OEE) from the production data we acquire over the OT network,” he added. “Now, we are discussing measuring OEE based on operator inputs and linking the HMI systems with the calculations on the management level. This is also why we needed a new network – to be able to service and upgrade our network for at least another 10 years, and expand the functionality for new data applications.”

Thanks to the upgrade, Orkla now benefits from a solution that is secure, offers maximum uptime, and is easy to maintain with local resources. The benefits of the new OT network are visible today at the facility in Indre Arna.

“By moving to the new network and the robust solution from Siemens, we have reduced production downtimes due to network issues from maybe three or four days a year to zero,” Faugstad explained.